June 17, 2010. It was the last day of E3, and everyone was unwinding, happy that the chaos of the show had finally come to a close. I remember it vividly — we kind of made the Scott Pilgrim party that night the unofficial Destructoid party. That shindig went on to become one of the most memorable parties of the week, yet little did anyone know of the chaos that was taking place just a few miles away.

It was the last game of the NBA Finals, with the Los Angeles Lakers having defeated the Boston Celtics, 83-79. The Lakers had won, so you would think everyone would be out celebrating, right?

Police ended up arresting at least 38 people that night, the charges including “public intoxication, inciting fights, vandalism and assault.” Many businesses suffered broken windows, and seemingly every car near the convention center was smashed up in some way. A few vehicles were even set on fire.

Police on foot, in cars, and even on horseback clashed with rioters through the night. There was a point where fans and two dozen riot policemen faced off after fans had torn down a traffic sign and set a couple of newspaper stands on fire. It was also reported that several dozen rioters rushed onto the I-10 freeway, disrupting the already horrendous traffic of L.A. Those are just a few examples from a night full of vandalizing.

All this happened because the Lakers won. Imagine what would have happened had they lost! This wasn’t the first time fans had rioted over a Lakers game, with the last incident taking place after the Lakers had won the 2009 championship.

I’m pretty sure the gaming industry, whether they’re a fan of the sport or not, breathed a collective sigh of relief after the Lakers lost last night’s playoff game to the Oklahoma City Thunder, 106-90. The city’s other team, the Clippers, were knocked out of the playoffs this past week as well, completely clearing out any worries when it comes to the basketball factor.

Granted, the NBA Finals could be taking place after E3 is long over this year (there isn’t a schedule of the finals as of this writing). Still, even if the Finals were later in June, we would have still seen the Lakers playing home games had they made it through, and you can’t exactly predict when a riot will go down. There’s almost a twisted sense of obligation to riot whenever the Lakers are on the line to win the finals, it seems.

This piece isn’t about hating specifically on the Lakers, or the sport. I don’t keep up with basketball at all, or sports in general, really. A lot of us in the gaming industry are just happy we don’t have to fend for our lives while trying to play the Wii U. Ever since the 2010 incident, I’ve always found myself cheering for whatever team was going up against the Lakers. It didn’t matter who, so long as the Lakers would lose and we wouldn’t have to be subjected to the insanity the fans would unleash upon downtown L.A.

This year was no different, and I saw many other gaming industry folks on Twitter last night, from fellow games media writers to public relations people, all wanting the Lakers to lose. I’m sure even some actual Laker fans who work in the gaming industry wanted them to lose, too, although they probably would never publicly admit to that.

However, the gaming industry isn’t completely clear just yet. The NHL’s Conference Finals are in progress right now, and the L.A. Kings could very well be playing for the Stanley Cup during the week of E3 if they continue their winning ways, according to Destructoid’s hockey experts, Samit Sarkar and Andrew Benton. 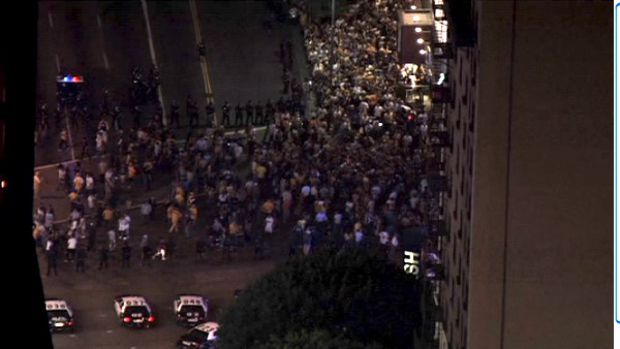 Granted, the NHL concern is more from the slowdown everyone can expect with the amount of people flooding downtown L.A., as opposed to any potential riots. Well, hopefully there won’t be any rioting at all, but people tend to go nuts at these things so you never know.

Riots end up surrounding sporting events for some insane reason, whether the team wins or loses. 2010 also saw San Francisco Giants fans rioting after the team had won the world series that year. This literally hit close to home for me, as some of the rioting took place just a few blocks from Destructoid HQ in the Mission district.

I remember walking through the crowds on my way home that evening, where I witnessed people dancing on a fire truck and saw a mattress on fire nearby too. A few blocks from the fire truck incident saw even far worse examples of humanity. One particular shocking incident involved a mob pulling people out of their car and beating them up.

No industry is perfect. Videogame fans are far from the shining example of how fans should act. Despite all the death threats thrown around, you can’t exactly point at any examples where fans attacked a company or each other with actual physical violence over how a game was made. When it’s all on the line, sports matches just tend to bring out the worst in people. Shortly after last night’s Thunder/Lakers game was over, two suspected shooters let out shots near the arena, injuring seven people. Six of the gunshot victims are in good condition, while one remains in critical condition. A pregnant lady was also taken to the hospital, suffering some injuries from the incident. She appears to be in good condition.

Still, rioting or not, E3 itself saw 46,800 people from around the world attend the conference last year. Combine that with the Staples Center’s seating capacity for a hockey game — 18,118 — and L.A.’s notoriously horrible traffic situation, and you have a recipe for a very long and stressful week.