A few weeks ago Jim Sterling wrote an article about why Dynasty Warriors is the greatest videogame series ever. It was an interesting feature, but I had to chuckle at the glaring typo in the headline: Obviously Mr. Sterling meant to type “Why Dynasty Warriors is the second greatest videogame series ever,” as Pikmin is easily the first.

Back in December 2001, when I anxiously ran into my local Best Buy to purchase the brand new, just released Nintendo GameCube, I had only one game on my mind: Luigi’s Mansion. As I ran past the Linkin Park CDs and DVD copies of Shrek to reach the videogame section, I noticed something odd: Sitting there quietly next to Luigi’s Mansion was a strange little GameCube game called Pikmin.

Being the giant Nintendo fan(boy) I am, I had most definitely heard of Pikmin, but I wasn’t really sure what it was about. And, honestly, the little I knew about it didn’t really appeal to me. Lucky for me, my impulsive tendency to buy anything made by Nintendo took over; I picked up Pikmin and whisked it home.

Hours later, my gaming life changed forever. Pikmin sucked me into its over-sized, nature-themed world big time. And I am so happy it did.

Even though there have only been two games in the series (with a third one on the way!), Pikmin and its sequel are easily two of the most original, creative, and flat-out entertaining videogames of all time. Find out why after the jump.

Sure, Miyamoto had a hand in recent Wii hits The Legend of Zelda: Twilight Princess and Super Mario Galaxy, but Miyamoto’s last great, original IP is the Pikmin series. And before you start yelling at me, yes, I know he designed Wii Fit and Wii Music as well. You must have missed when I said last great creation.

Wii Fit and Wii Music are most definitely interesting experiments, but as games they leave little to be desired. Pikmin is a completely original IP with some of the most addictive and unique gameplay ever featured in a videogame.

The more I play the Pikmin games (and, boy, have I played them a lot) the more I realize how absolutely ingenious their design is. Pikmin is a true testament to stunning game design and the perfect example of why Miyamoto is the greatest videogame designer of all time. Yes, I said it (with no hesitation): of all time. 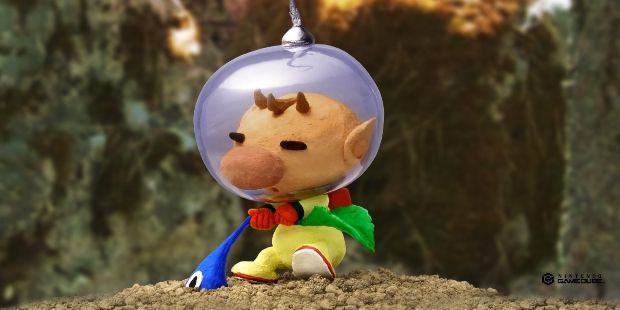 The gameplay is delightfully varied and surprisingly deep

I am making sure to set a limit on myself from typing too much in this section of the article since I could go on for pages about how incredible the gameplay in Pikmin is. I will try my best to hold back and not ramble on too much.

For people unfamiliar with Pikmin, the original game stars an astronaut from space named Olimar that crash lands on a mysterious planet populated by little creatures called Pikmin. After exploring the crash site, Olimar learns that these loyal Pikmin will do anything he says and obey his every order. Using this to his advantage, Olimar sets off on a quest around key parts of the planet with the Pikmin by his side to find the parts to his broken spaceship and return home.

The game is unique for many reasons, first and foremost because it falls into a genre of its own.

On the surface Pikmin is a real-time strategy game, with players controlling Olimar’s army of Pikmin to battle enemies and complete tasks. But as the game commences, the surprisingly deep and varied gameplay starts to take form.

Using the Pikmin to retrieve parts, build bridges, take down giant monsters, and tear down walls is fun enough, but Pikmin adds so much more to this basic real-time strategy gameplay.

Most significantly, there are three colors of Pikmin — red, yellow, and blue — each with a unique specialty. Red Pikmin are strong and can resist fire, yellow Pikmin can be thrown high in the air, and blue Pikmin (arguably the most useful in the game) will not drown in the water. Since you can only have 100 Pikmin in your army at one time, mixing and matching these different colored creatures to be the most advantageous is a challenge all on its own.

But then there is the ability to power-up each individual Pikmin by growing fully bloomed flowers on their heads.

And the fact that you can only stay in a level from sunrise to sunset (about 15 real-time minutes).

And did I mention you only have thirty in-game days to find all the necessary ship parts and escape the planet before your oxygen runs out? 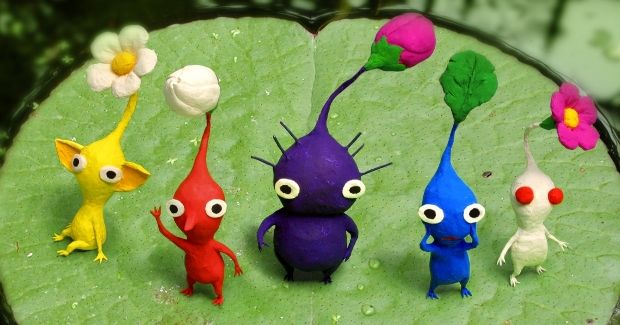 The characters are too cute for words

The Pikmin characters themselves are cute. Almost criminally so.

While very basic in their design — they are no more than a small, monochromatic body with two dots for eyes and a flower on their head — the Pikmin ooze personality. In a way, their basic design makes your emotional connection to them all the more affective.

How many videogames have you played where a character has died and you don’t even think twice? A vast majority of them I would bargain. How is it, then, that every single time one of the Pikmin is killed it breaks my heart a little bit?

Maybe it is the fact that, like I said, the Pikmin are cuter than a baby polar bear cub kissing a puppy?

And if you are fan of Pikmin you know these deaths happen a lot. When fighting a huge, screen-filling beast, sometimes 50 Pikmin at a time will be either crushed by a giant foot or chomped down on by gnashing teeth.

To make things more depressing, the Pikmin each let out a little scream before they die and their little Pikmin ghosts rise up into the sky.

Yeah, that’s right: they have ghosts. And every time you see one it is unbelievably heartbreaking.

Pikmin 2 is the best videogame sequel EVER

I can’t think of a sequel in recent memory that has so perfectly improved on a predecessor’s gameplay more than Pikmin 2 (also for the GameCube). While the original Pikmin is an amazing game in my mind, it suffers from a few minor flaws that could have made it even that much better. But, remarkably, the game’s flaws were only evident once Pikmin 2 was released and made everyone realize they even existed in the first place.

Pikmin 2 gets rid of the thirty-day ticking clock, which — even though it never bothered me — allows for more exploration of the game’s beautiful, expanded planet and less time stressing out.

The most improved new feature, though, is the introduction of two new colors of Pikmin. In addition to the classic red, yellow, and blue types, Pikmin 2 introduces the white and purple Pikmin. The white Pikmin are completely immune to poison, can discover hidden items, and can even hurt enemies by being ingested and sacrificing themselves. The purple species, on the other hand, are much larger than normal Pikmin and ten times as strong.

And then there is the addition of a second playable character, a ridiculously solid two-player mode, a plethora of more treasures to find, randomly created caves, some of the best enemy design in any Nintendo game  … AHHHHHH, I get excited just thinking about it!

Pikmin 2 really is the greatest videogame sequel ever made.

It is unbelievably addictive

With the ridiculous long list of videogames I have to play at one time, it is very rare for me to finish a game and immediately start to play it again.

Not only did I do this with the original Pikmin, I DID IT THREE TIMES IN A ROW!

I was so enamored with the original game that I started it up again the minute I completed it. And then I proceeded to beat it and restart again. And then one more time after that. All in the span of a short weekend.

It’s not just the simple, yet satisfying gameplay that is addictive. Pikmin records many important statistics while playing the game — such as playtime and number of Pikmin created — that completely motivate the player to go back and improve their record.

Most significant are the “Pikmin lost in battle” and “Number of days” statistics. As I mentioned before, the Pikmin are unbelievably cute, and having them killed during the game is surprisingly depressing. Seeing an exact number of Pikmin deaths immediately makes you want to go back and lower that number on your next play-through.

Add on the fact that Pikmin is the perfect replayable length at about 5 hours and you have the ultimate excuse to stay in and do nothing else on a rainy weekend.

A Pikmin is the only tattoo I would ever consider getting

Well, aside from one of Princess Peach holding a parasol on my inner thigh.

In all seriousness, though, this is a true story. I have nothing against tattoos, but have resigned myself to the fact that I will never get one for two reasons: 1) Permanent things scare me and 2) sharp things poking into my skin scare me even more.

But … I was this close to getting a tattoo last summer of one of the Pikmin. I never decided which color I would get, but the design and everything was picked out!

Too bad tattoos can’t be applied with puppy licks and not giant pointy metal things. If that was the case I would be staring at a cute little Pikmin tattoo right now on, well, let’s just say my upper arm since that is the manliest place I can think of to put a tattoo. 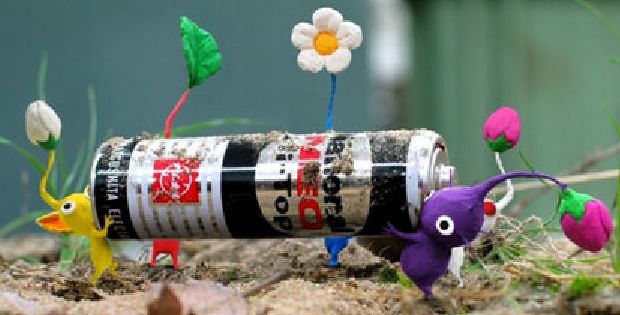 Don’t get me wrong: when Nintendo showed surprise footage of The Legend of Zelda: Twilight Princess during E3 2006 I almost passed out from happiness, but nothing can prepare me for what will happen once Pikmin 3 is (hopefully) revealed this year.

At last year’s E3 I had a strange feeling that Pikmin 3 would be announced for the Wii. When I sat there in the Kodak Theatre and watched the Nintendo Press Conference I kept liveblogging how excited I was about the assumed announcement.

When not even a word about a new Pikmin game was mentioned I was devastated. I think I even — gasp! — typed a frown face during the blog. And that was a year ago! At this year’s press conference I may actually run up on stage and punch Cammie in the baby maker if the words “Pikmin” and “3” don’t come out of her mouth followed by a dimming of the lights and a montage of (amazing!) gameplay footage.

Am I weird for liking such a random series this much? Probably. Is it odd that I am this obsessed with a game about glorifying slavery? Oh, yeah, definitely. Does that change my love of Pikmin? Not in the slightest.

Pikmin is the greatest videogame series ever, and if you don’t think so … you’re … you’re … a stupid jerk face.*

*I was just kidding about calling you a stupid jerk face. I really love you and won’t ever call you a mean name again. <3