Up and down and all around

Speed is considered the key trait of Sonic’s gameplay. The thrill of blazing through landscapes and the challenge to quickly complete stages is almost always a selling point for his games. This past decade, his speed has been amped up even further, most notably by the recurring Boost mechanic. You’d think this would cause the thrilling appeal of his games to skyrocket, but his general reputation says otherwise. It’s no secret that most of Sonic’s newer games are received less well than his older games (with the rare nostalgia-heavy exception). When comparing these games against each other, one common topic of praise or criticism recurrently appears without fail: the physics.

This isn’t a big surprise. Sonic‘s a platformer, how he moves affects whether the game is good or bad. But this topic still comes up much more often in conversation than it does for most mascot platformers. Sonic, however, isn’t a usual platformer. His games are driven by platforming across stages as speedily as possible, and as such, the methods by which players manage their speed acts as the cornerstone to that experience. So, what defines good physics for a Sonic game? 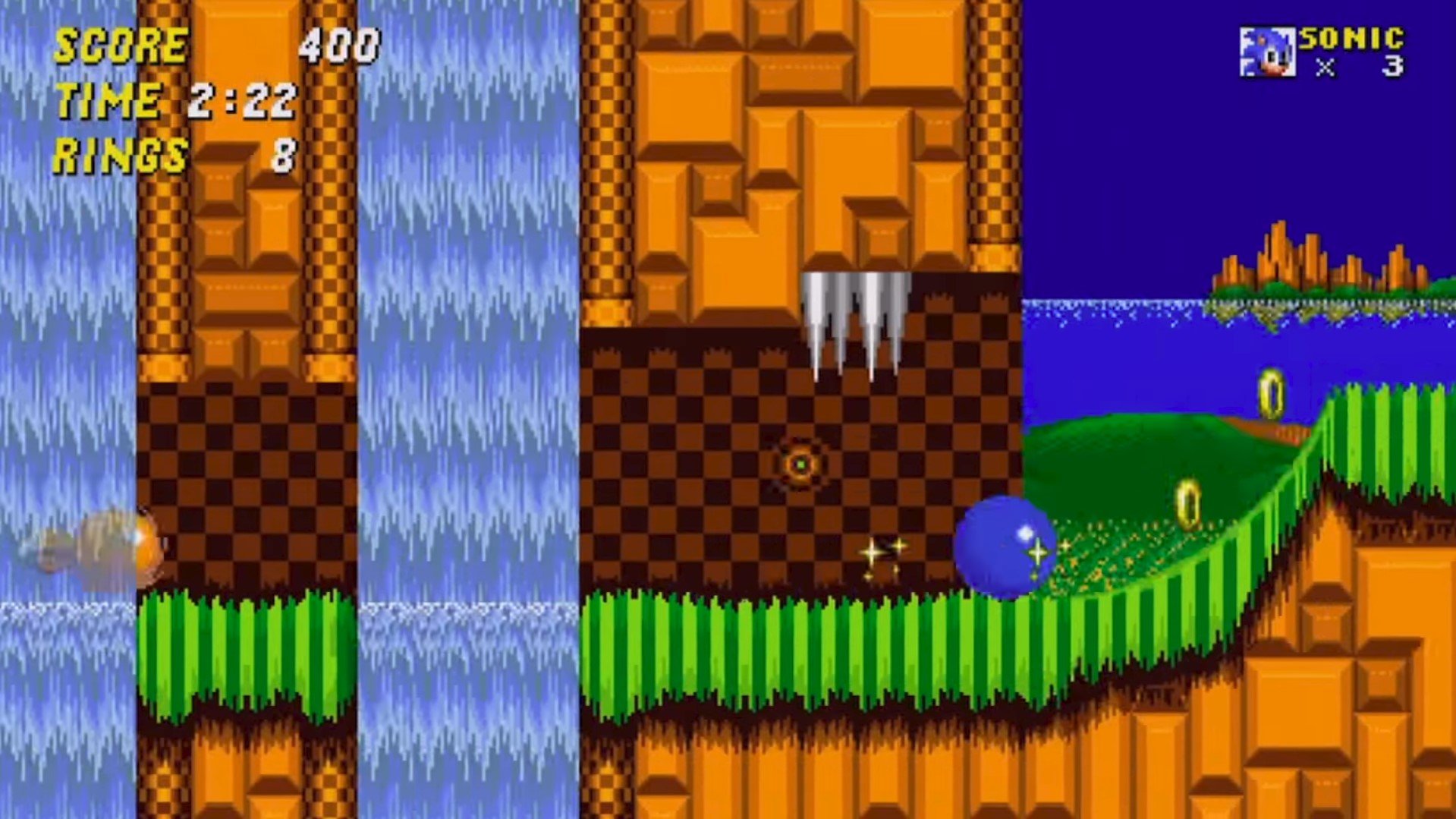 Though the word “physics” often gets tossed around, this is just as much of a matter about controls. After all, Sonic’s movement is mostly driven by his abilities, and the occasional environmental interaction such as springs. So the best place to start would be to compare games where Sonic has mostly identical movesets, but with very different receptions.

The biggest example to come to mind is Sonic Adventure (for analysis’s sake, 1 and 2 combined) versus Sonic 06. And I swear to Mothra, I won’t waste time reiterating everything everybody already knows about that mess. Since these games have so many characters, let’s stick to just looking at Sonic himself.

How about the most basic of basics, like running? In the Adventure games, Sonic accelerates quickly and steadily. Nothing special, right? Well, consider the issue of 06 making Sonic’s only two speeds being “slow” and “meh” with little in between. By giving Sonic a steady acceleration curve in Adventure, his speed becomes more reliable and manageable. As such, it feels much better to control. It’s a little thing, but it’s something to bear in mind.

But Sonic gets around using buttons as much as he does with the control stick. The Homing Attack is a staple of his repertoire. In Adventure, Sonic lunges forward the instant you press the button. The glowing blue “afterimage” trail behind him demonstrates that even during this snappy movement, gravity pulls him in a slight downward arc. If an enemy is nearby, he instead chases after that enemy and bounces slightly past them. Immediately after he connects this attack, he can move and even launch another Homing Attack. 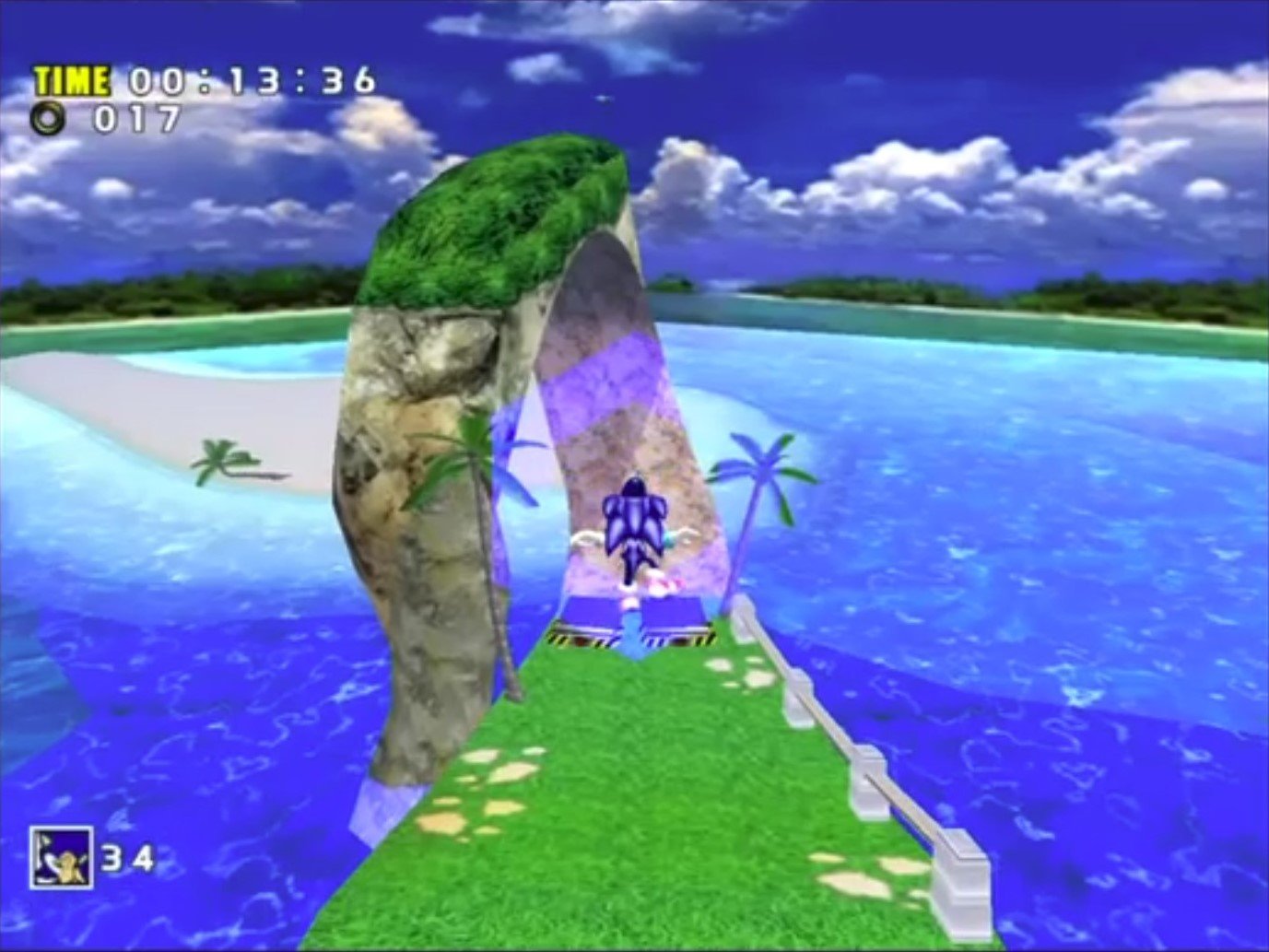 Compare this to Sonic 06, where the Homing Attack’s lunge lasts about half a second and keeps Sonic’s vertical position exactly where it is until it ends. Also, when this attack connects, Sonic hops straight above where he landed and can’t move or attack again for another half a second. The original Homing Attack is more responsive and carries more momentum, while the 06 one is sluggish and stiff.

Another such move Sonic players often focus on is the Spin Dash. That classic rev-up-and-launch feedback is a simple but gratifying feeling, especially as it was in Adventure. While Sonic needs to stop for a moment as he rapidly rolls in place, the instant you release the button, he rockets forward at a breakneck pace, far faster than he can normally get by running. Making this technique even more thrilling is the option to jump off slopes, carrying that insane burst of momentum farther by releasing Sonic from earthly friction and soaring huge distances. Spin Dash jumping is so exhilarating that even as a kid, I applied it to perform huge level skips.

In Sonic 06, much like the Homing Attack, the Spin Dash is stunted by reduced speed and the inability to jump while rolling. Sonic 06 not only made Sonic’s moves slower, it made them less interesting to use by stripping away their nuances on his mobility.

Despite the Spin Dash’s popularity, it has mostly disappeared from modern Sonic games. Why? Because of the introduction of Sonic’s new accelerate-forward-really-fast technique, the Boost. Sonic’s Boost gives him an instant surge of acceleration and speed, rocketing him forward as soon as the player taps and holds down the Boost button. Unlike the Spin Dash, this mechanic isn’t balanced by the requirement of stopping, but by resource management (a meter that depletes while in use). 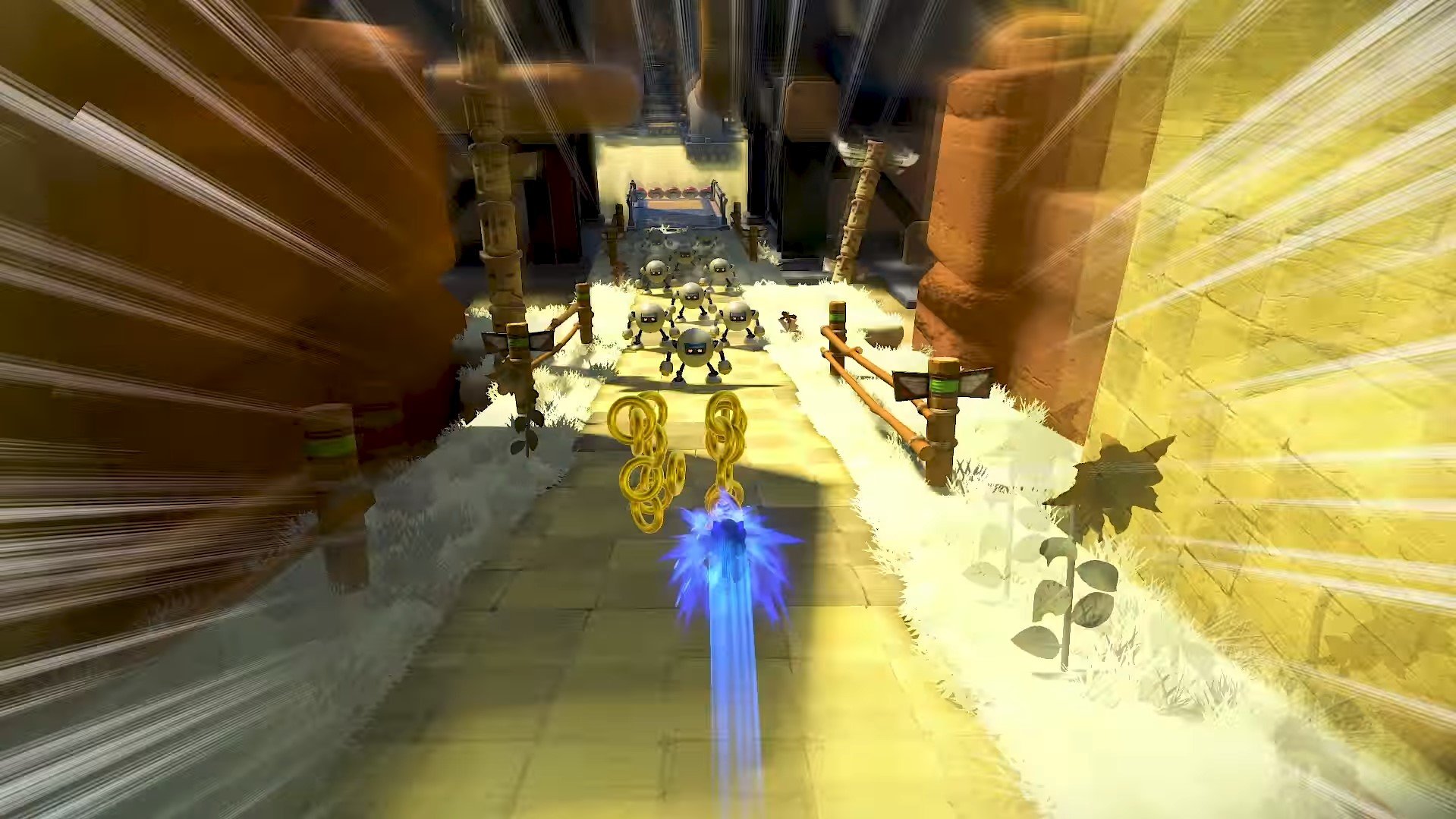 The result is a new gameplay style that emphasizes constant forward momentum and managing that momentum by avoiding obstacles and acquiring more Boost energy. The 3D games then removed the Spin Dash. Not only because it has a redundant function, but also because levels designed to make the most of the Boost need long, corridor-like designs to complement its continual speed boost. The Spin Dash wouldn’t have the same appeal it did before if applied to a game built around keeping a Boost going as long as possible.

So, what’s my point in saying all of this? The thrill of racing to the end of a Sonic level as fast as possible is much like the appeal of speedrunning. The speedrunning community often chooses good speedrunning games not simply for how fast one can traverse from point A to point B, but by the mechanisms through which they get there. The Boost mechanic is criticized so much because it’ s built around optimizing one single ability for the vast majority of a run; hence the phrase “Boost to win.” Not like that automatically makes it a bad mechanic, but it lacks the room for executing unpredictable maneuvers with nuanced outcomes. It’s less interesting to people who want to improve their top times by experimenting with multiple game mechanics.

Fans and critics alike often cite newer Sonic games for feeling stiff, including Chris Carter’s review of Sonic Forces. Conversely, Sonic Mania receives much more praise for its controls and physics, even though the only new tool Sonic gets in that game is the Drop Dash. It’s a simple ability that allows Sonic to charge a Spin Dash while in the air, and immediately dart forward the instant he hits the ground. It doesn’t make him faster than a normal Spin Dash, but it interacts with his controls and his traversal across level design in an unusual way. And people love the Drop Dash! I’m still playing Mania myself, and I love how the Drop Dash feels to use. 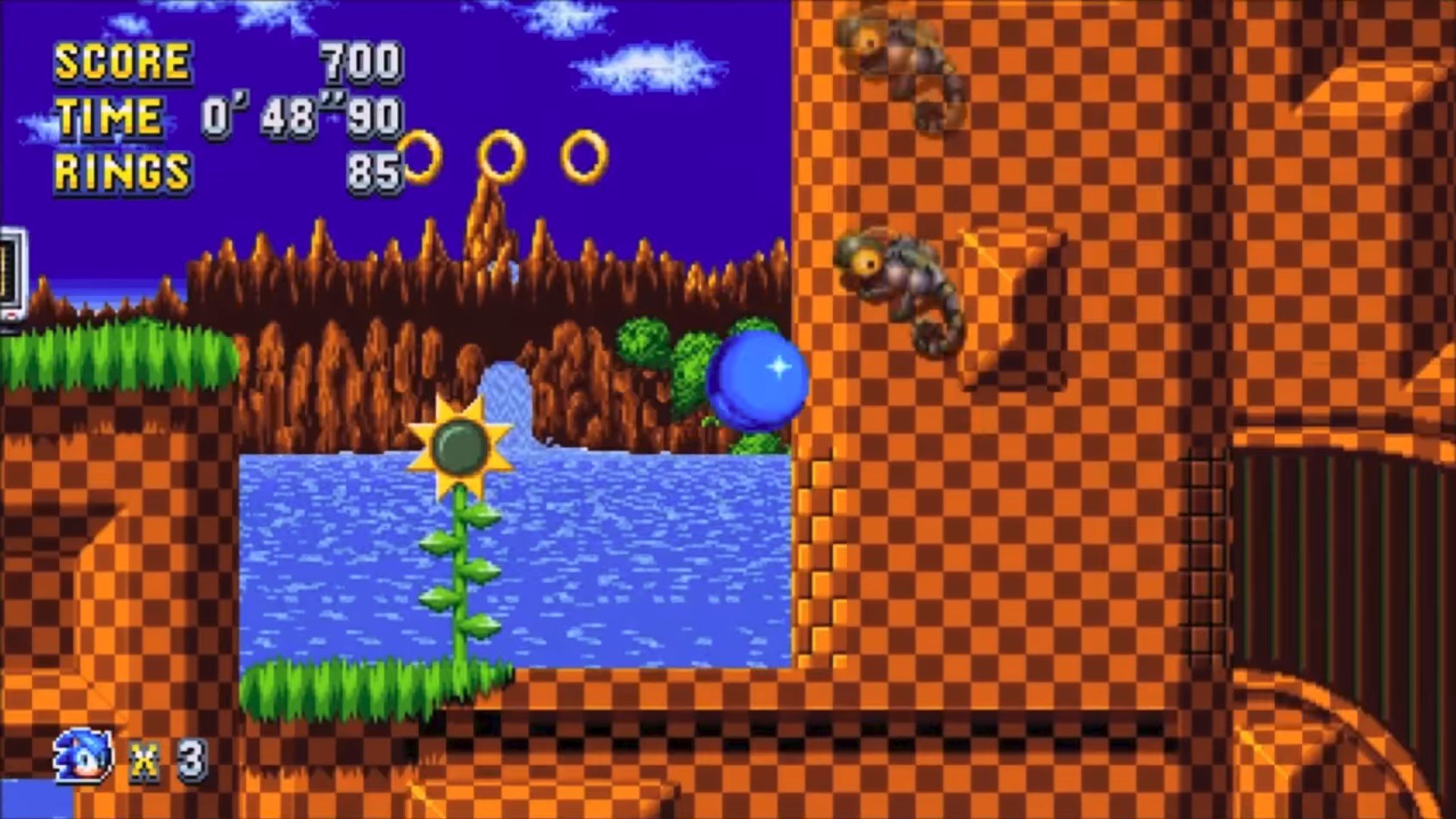 The Boost-heavy games use a more linear speedrunning experience. If any speedrunner threw up reading that sentence, they just proved my point that’s not the experience speedrunners look for. The addition of the Drop Dash, while not exciting in itself, adds another option to speedrunning tactics that increases the depth of planning one’s maneuvers and the skill required to execute them. It better complements the gameplay elements that the series became famous for.

While I’m still not convinced the upcoming SXSW Sonic panel is likely to tell us more about a new game than maybe a vague teaser without a name, I’m anxious to see what’s in Sonic’s future, and not in an optimistic way. Even so, Mania proved that there is still hope for the blue hedgehog to rise out of his funk. That’s all I want to see out of him, whether he’s pixelated or polygonal or… I dunno, voxelated? Modern Sonic games have many issues, but how they control and handle sticks out to me as the most important one. That’s why I hope the next Sonic is going to take more pages out of Mania’s book than Forces’s, but we can only wait and see.