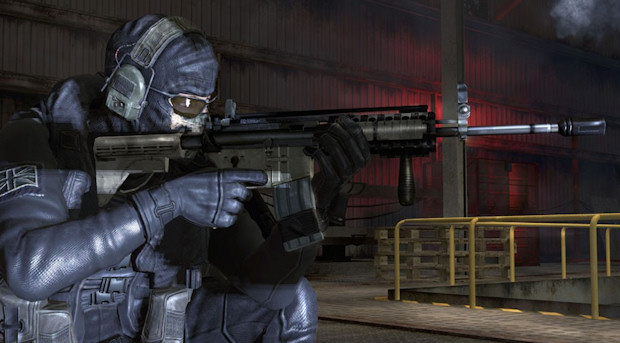 Modern Warfare 2 has generated an undeniable wave of controversy with the revelation that it will include a scene in which players can act out a terrorist atrocity and gun down innocent civilians during an airport raid. The controversy is, in many ways, predictable, and it would be reasonable to assume that it’s a controversy Infinity Ward had banked on, although why an already guaranteed success would need to rely on shock tactics to sell copies is beyond me.

The point is, Modern Warfare 2 has now drawn a line in the sand and people are taking sides. Earlier this week, our own Brad Rice made his feelings clear, stating that he cannot stand by Infinity Ward for choosing to include this scene. I would like to stand on the other side and state why it is I support Modern Warfare 2 and the decision to include such a controversial scene.

Read on as I explain why, unlike Mr. Rice, I can support Modern Warfare 2.

The footage implies that this scene involves players acting out the role of a CIA operative, one who is taking part in a terrorist attack as part of his mission. His goal is unshakable. Like it or not, the operative will have to kill innocent people as part of his mission. He only needs to gun down the security guards, but those he works with are opening fire on civilians as well, committing a major terrorist atrocity that the player is powerless to stop. That is not all, however. The operative can go one step further and join in on the wholesale slaughter of innocents.

The easy thing to do is to take this information and view it as Infinity Ward condoning terrorism. However, I argue that such a point is dangerous to make. Just because we allow something to happen, that does not mean we condone it. America currently allows hate groups like God Hates Fags to preach against homosexuality and celebrate the deaths of American soldiers. Does this mean America therefore condones bigotry and hatred? Of course not. We all need to tolerate things in life. We don’t need to approve.

It’s all about choice, and Infinity Ward has put a very brutal choice in front of the player. Do we carry out our objectives so realistically that we murder innocents, or do we do the bare minimum and hope to get out of it by the skin of our teeth? Whether you join in the slaughter, or simply stand by and watch, you’re damned either way.

Choice is the important word here. Peter Molyneux once interestingly noted that, given a choice, most players decide for themselves not to walk down the path of evil on their first time playing a game. His own game, Fable, allows players to either be good or evil, and evidence suggests that players actually prefer good. While it’s a given that there are players out there who will choose to shoot as many civilians as possible for a laugh (and really, I don’t think a laugh is a bad thing, even if it is in bad taste), it’s totally reasonable to expect that many players will choose to do the “right” thing.

Furthermore, access to this very portion of the game is, itself, a choice. Infinity Ward will not be forcing anybody who buys this game to play the “airport scene.” Instead, players will be warned beforehand that “disturbing” scenes are coming, and will have to manually agree to view the content. If you disagree with the controversial content, you are empowered to leave such content out of your experience.

Brad Rice argues that such a harrowing scene takes the will to fight out of him, that it makes him question if such a fight is worth the lives as stake. I can only see that as statement in favor of the game, rather than in condemnation of it. That a game could so powerfully affect Rice’s state of mind, simply through watching it passively, is quite an amazing achievement if you ask me. Perhaps Infinity Ward hopes to raise and possibly answer the questions Brad throws up — is such sacrifice worth it? Should we fight such dirty battles for the greater good? How much loss of civilian life is acceptable in the name of American security?

In my mind, there are few developers out there more capable of asking such questions in a gameplay context than Infinity Ward. Call of Duty 4: Modern Warfare is responsible for two of my most amazing memories in videogame history — the notorious airplane gunner scene, and the nuke walk. The former of these scenes was a subtle yet brilliant commentary on how desensitizing modern warfare can be, as the player shoots at white, vaguely humanoid shapes from miles away, viewing the world through a camera that makes everything look unreal. The latter section is little more than an interactive cutscene, as the player escapes the wreckage of a downed helicopter before walking through a nuke-ravaged city and dying on the spot.

These scenes are quiet and reflective, yet thoroughly impacting. They also leave no doubt in my mind that Infinity Ward possesses the grace and tact to truly say something with this controversial scene. This is not Rockstar, or Running With Scissors, or some untested indie dev looking to make a name for itself. This is a studio that has done this kind of thing before. I dare say that Infinity Ward knows exactly what it’s up to. There are few games out there bold enough to take the interactive elements of videogames and make something truly artistic with them, but as far as I’m conerned, Infinity Ward did that two years ago, and has a very good opportunity to do it again.

The “Hollywood does this stuff all the time” argument is a weak one. I agree with Brad on that. However, to me it’s weak not because it’s an invalid point, but because videogames don’t need to hide behind Hollywood anymore. Games should stand on their own legs and say “We want to do this, societal sensibilities be damned.” Videogames have been far too timid for the past several years, afraid to step out of line lest FOX News or The Daily Mail or some agenda-driven politician catch on to their shenanigans.

Games don’t need examples from Hollywood to justify their own content. Games need examples from their own medium, and for such examples to exist, we need things like the “airport scene” from Modern Warfare 2 to happen. Somebody has to be allowed to take the first step forward, even if that step is a stumbling one. I thought the first step would be Six Days in Fallujah, but that game fell prey to the same fear I just mentioned. A publisher too afraid to cause a stir, so would rather kill off a game and cripple a studio than take that first important move forward. I’m not known for my love of Activision, and in fact have routinely recommended a lack of support for the publisher in light of its behavior. However, I do commend Activision for publishing this game, and sticking by it in the fact of what will most assuredly be a media shitstorm. In this one instance, Activision definitely has my respect.

Yes, absolutely disturb. I hope that players do feel uncomfortable playing this section of Modern Warfare 2, and I hope that Infinity Ward is going for that exact feeling. I also hope that, after playing it, gamers will say, “That made me feel sick, but I loved it.” I hope it gives players chills and maybe even makes them turn the computer off to think about what they just did. I hope, more than anything, that this debate will continue long after Modern Warfare 2 is released and we’ve finally played it, as gamers around the world ponder the necessity of what Infinity Ward did, and argue over its importance.

If Modern Warfare 2 can do all that, then we can truly say that videogames are art.