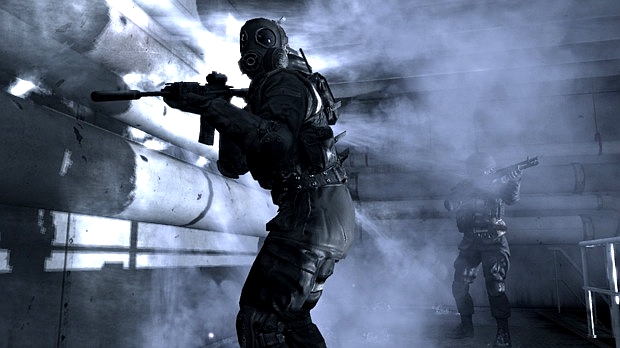 Call of Duty: Modern Warfare 2 has been in the headlines quite a bit recently, mainly concerning the leaked footage of the airport level. We’ve had varying levels of reactions go around here amongst the watercooler at Destructoid, and I’ve noticed a wide range of opinions in the comments as well.

The thing is, I just can’t stand by Infinity Ward’s decision on the scene.

Honestly, I get a horrible, unsettling feeling in my stomach when I think about the scene. I sat and watched it a few times over, and despite what explanations I’ve heard about the scene and Activision’s statement on it, it just doesn’t come across as something that “evoke the atrocities of terrorism,” at least not in a way that it should.

As far as things seem to be, you’re playing as an undercover CIA agent who has to participate in this attack on an airport. You’re only required to take out the security guards here, but your teammates are going wholesale slaughter on the place, and there’s nothing preventing you from joining in, save for your own morals.

And even then, you’re going to lose a part of your soul playing through the level. Why? Because it’s asking you to condone this sort of action. You have to stand by and watch — even participate — in this slaughter. Yes, it’s supposed to evoke the horrors of terrorism and show the harsh choices people do have to go through in real life, but it does it in a way that’s blunt and ham-fisted, in my mind.

In my mind, what the scene actually does is take the will to fight out of me. By having me participate in the slaughter, it makes me question if this fighting is even worth it. It seems as though there’s no way for me to reconcile with what I’ve done — saying that it’s in order to protect a greater number of lives

There are a number of reasons why the ghosts that our government agencies have implanted across the world are chosen for their missions, and one of them is undoubtedly because they can manage to stomach the actions they have to undertake so that the rest of the world need not know about them.

I saw a lot of people commenting that “Big deal you can kill civilians have you ever played G.T.A or saints row you can do it in them and in a more brutal way you guys are making it seem like a huge or deal when its not” (That one is from jordang.) Yes, you do slaughter civilians in the Grand Theft Auto series, but I don’t particularly like this argument.

The first reason is that while you do have the freedom to murder and rob civilians, when you do, you are presented with an immediate and negative feedback for the action (wanted stars). Repeatedly doing the action sends police chasing after you, and leads to your possible arrest/death soon after. There isn’t that in the game. In fact, the slaughter is rewarded with a positive outcome: allowing you to proceed in the level. The lack of negative feedback in the game from this scene, instead choosing to rely on a player’s internal morality to let them know this scene is bad.

Second, there’s an expressly different mindset when playing Grand Theft Auto. The game’s tone takes itself much less seriously and to an extent I find the violence “comic.” There’s a clear line between comic violence and brutally realistic violence, which is where I put Modern Warfare 2. There’s just not the same level of realism when it comes to shooting down civilians running away from you when compared to running over old ladies with “Vladivostok FM” playing in the background.

And that’s really not a bad thing. It’s just that the two things don’t have the same tone to how they treat the situation. It’s like pitting Zombieland and Night of the Living Dead against each other. Sure, they’ve got the same basic point of contention (zombies), but they tackle them in such different lights, that it’s pointless to draw parallels.

In the larger context

A feeling I got not only from the commenters but from Infinity Ward is that “Hollywood does this sort of stuff every day.” There are varying extents to the effectiveness of this claim, but my feeling on storytelling, not solely in film or videogames or any other medium, is that there are rules or guidelines for a rewarding story.

The rules and guidelines not only help people to create an effective story, but also helps explain the rationale for why certain boundary-pushing scenes or stories are being told. You can trace a logical progression through the horror genre, for example. But when something pops up that is so radically out there, it more often than not will get hammered down.

I’m not talking about “out there” in an innovative sense — I mean something that’s overly gory, bordering on snuff. It ignores the cultural rules that have been formed in order to attempt and describe their vision, which others just might not share.

And that’s what I feel Modern Warfare 2 has done.

What they could have done

Does Infinity Ward and Activision have the right to make this? Absolutely. This is the USA, after all, and Modern Warfare 2 has some serious artistic value, so the obscenity label should be placed nowhere near this work. I just think that it violates the cultural taboos that I mentioned earlier.

It wouldn’t be right of me to simply bash this work and not give any suggestions, now would it? So here’s how I would have tackled this, with the limited knowledge I have about the entire story.

I would have had the level itself play as the aftermath. You go in as a medic, attempting to find survivors amongst the piles of bodies. There would be some, and you’re simply trying to hear their stories before some of them die, to get an idea of what happened.

Yes, the scene would be tough to go through, and may be equally controversial, but I think it would give the appropriate impression that Infinity Ward is going for with the airport scene. It would ignite that sort of anger and disgust with what happened that makes you want to go out and get revenge, in my mind.

And as for the horror of having to give up your soul and participate in something like this as an undercover agent? What about inserting flashbacks later on in the game? As you’re chasing down a terrorist or something, the player has flashbacks to chasing down civilians in the airport? Torturing them with an altered reality (something Kane and Lynch failed to exploit properly) could be extremely effective.

The use of negative space, allowing the player’s imagination to fill in the blanks as to what happened, is something much more powerful and more frightening, in my mind. Infinity Ward would have done well to take advantage of that.

What Infinity Ward has done here is certainly something ambitious. They’re attempting to take storytelling in another direction, giving it a stronger sense of realism than we’ve ever seen in a game before, some might argue.

But as revolutionary as it might be, my feeling is that Infinity Ward is handling this in the wrong manner. The way that the plot is likely being handled comes across with a lot of the wrong messages, and shows a poor method of thinking when it comes to the sensitivity of the issue: simply presenting something like this in its full form.

Ultimately, it’s not up to me to decide the fate of Call of Duty: Modern Warfare 2. It’s up to you, the general public, to decide. You can choose to cancel your pre-orders and not spend your money on the game, instead placing it elsewhere. God knows there are plenty of games coming out to spend your money on.

I’ll leave the decision up to you, but as of right now, I can’t throw my weight behind Modern Warfare 2.

Filed under... #Call of Duty#Destructoid Originals