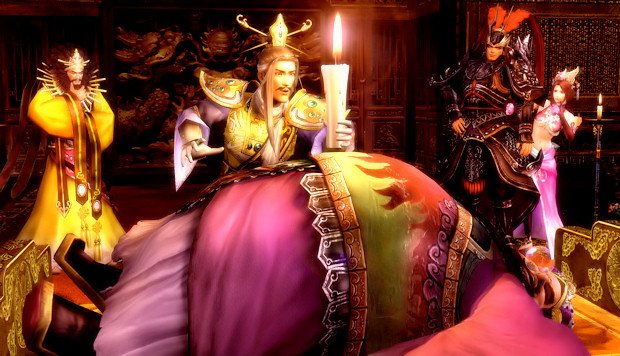 Any sane, reasonable, intelligent human being already knows by now that Koei’s Dynasty Warriors series is the greatest collection of videogames to have ever stalked the Earth. Featuring a unique blend of unrelenting hardcore gaming action and fiendishly cerebral tactical challenges, it has been said by many that Dynasty Warriors is humanity’s greatest cultural achievement since Dio’s Holy Diver.

As with most excellent and venerable institutions, however, the series is not without its detractors. Their numbers may be small and their grasp of basic hygiene may be non-existent, but the ignorant, borderline retarded dribbling from those that somehow think Dynasty Warriors isn’t very good cannot be ignored much longer. My own wife once suggested that Dynasty Warriors was sub-par even among hack n’ slash games. Naturally I burned her eyes with deodorant spray and kicked her in the pelvis until I broke my foot.

It was then that I realized education was in order. It’s not the fault of these imbeciles that they don’t realize how good Dynasty Warriors is. They simply don’t know any better. Ignorance is a disease, but fortunately I am the cure. Take my hand, young simpleton, and follow me on a journey of enlightenment, as we discover together why Dynasty Warriors is the greatest videogame series ever.

Dynasty Warriors has earned itself a reputation as being just a dumb hack n’ slash game. However, scratch away the surface and one will find a cultural and historical depth that makes Dynasty Warriors just as educational and mentally stimulating as any Brain Training game. Dynasty Warriors is based on the historical novel Romance of the Three Kingdoms which is, in turn, based on legitimate Chinese History. Cao Cao, Liu Bei, Sun Quan and all the other characters are actual historical figures. That’s impressive!

The events that unfold in Dynasty Warriors is completely true and accurate, which allows it to be used in shools as a fun and more trustworthy replacement for text books. Each character is 100% grounded in reality and based on their historical counterparts to the most minute detail. Scholars and University Professors are known to have said that “If it didn’t happen in Dynasty Warriors, it probably didn’t happen at all.”

Seriously, throw out that worthless history degree and pick up your copy of Dynasty Warriors. You’ll be relieved that you did.

Anybody Can Play It!

Can you hit buttons? I can hit buttons! A God damned monkey could hit buttons! If you know how to hit buttons, then you know how to play Dynasty Warriors. It’s fun for all the family, and means that anybody can get in on the action. Complex and alienating hardcore games like Super Mario World and Klonoa: Door to Phantomile can put off the more casual player. Fortunately, Dynasty Warriors has an “easy to play, difficult to master” sensibility which means that Grandpa Jasper can get a piece of the action, but hardcore gamers will be able to crack its hidden depths to get a richer experience. They’ll enjoy it too, because Dynasty Warriors is loved by everyone!

Dynasty Warriors was making games accessible long before Nintendo ripped Koei off with the Wii. That’s right, the Wii is a blatant copy of Koei’s landmark series. Everybody knows that the vile hack Shigeru Miyamoto looked at Koei’s majesty over the emerging casual market and thought, “We need to steal ourselves some of that demographic.”

It’s A Strategy Game Too!

Dollar for dollar, Dynasty Warriors is the best value that money can buy. Why, just when you thought you were getting a bog-standard button masher, Dynasty Warriors puts on its thinking cap and says, “Hey, I’m a strategy game as well.” Two games in one? Mmm, that’s one unique stew you’re cooking Koei, and it tastes like Dynasty Warriors. Delicious!

Just like a real-time strategy, your objective will change in REAL TIME on the battlefield. All sorts of dynamic mission objectives can occur in battle, such as “Defeat an enemy officer” or “Defeat another enemy officer.” Sometimes you’ll need to defeat two enemy officers at once. The variety of gameplay and flexibility of the genre-warping innovation at work is simply staggering. You’ll think your eyes are lying bastards when you first pay stunned witness to this masterpiece in action.

The Games Stay The Same!

Think of each DW sequel as an MMO — you are paying a yearly $59.99 subscription to keep enjoying the same great action and attentive support of the game’s creators. See? Doesn’t seem so bad now, does it?

At the end of the day, let’s face it, the Dynasty Warriors formula is perfect. Who can blame Koei for wanting to keep that wonderful game as pure and untouched as possible, instead choosing only to vaguely refine each new title that comes along? Those that cry out for “improvements” to the Dynasty Warriors series are literally asking Koei to improve upon perfection itself. Bless Koei for trying, but not even those guys are capable of defying the laws of Mother Earth. Yet.

Choice … So Much Choice!

If you’re a Dynasty Warriors fan, then you’ll be spoiled for choice when it comes to selecting the right game for you. Whether you’re at home or on the road, there’s no reason to ever be without your daily Dynasty dose! Even though we’re officially up to Dynasty Warriors 6, don’t be fooled into thinking, disappointed, that there are only six games. Turn that frown upside down, because there is SO much more than that.

The hits don’t stop there, of course. Koei is constantly releasing new and delicious morsels of Warriors-branded excellence, so keep watching the stars. You never know when another will land.

The Music Is Amazing!

Tommy Tallarico has been put to shame, and Nobuo Uematsu might as well just suck cocks for a living, because the intense and exhilarating Dynasty Warriors soundtrack runs rings of musical delight all round the so-called music of other, lesser videogames.

From thrilling, screaming hair metal to thrilling, screaming other types of metal, the Dynasty Warriors soundtrack has it all. The franchise has amassed years of sublime sonic sweetness that rocks the ears and blows the mind with every delectable aural sampling. Who could forget the tripped out riffs of Ignition, or that iconic number, Yellow Storm? It’s like Mozart had sex with Roy Orbison and had a baby made out of pure music, isn’t it? Isn’t it?

Tunes this enthralling should really be illegal for the sheer power they have over the minds of we mere mortals, who are but buckets of shit in their presence.

Wait wait wait! So you’re telling me that it’s not only a thrilling action game and a brain-tickling strategy title, but it’s also an RPG!? SOLD!

Dynasty Warriors truly is the gift that keeps on giving, providing a deep and enriched roleplaying system full of everything that makes RPGs cool, like leveling up, and some other things! There are over forty characters per game (amazing value) and each one can be taken through an emotional story mode that tells the shocking tale of the Three Kingdoms era. Characters level up, just like in Final Fantasy VII, which makes Dynasty Warriors better than that game because of reasons!

Just think — if you bought every Dynasty Warriors game ever made and tried to max out every single character, you’d probably be dead before you managed it. This means that you don’t need any other games in the world outside the Dynasty Warriors series. Not even the most “epic” RPG from Square Enix can claim that much gameplay. Just try and compare Suikoden to all thirty-four Warriors games and I think you’ll agree that Koei wins the content war every time. Go back to school, Konami, you have a LOT to learn about RPGs.

Many have seen the way in which Koei has conquered popular opinion with its landmark franchise, and many have attempted to copy the award-winning formula and repackage it under their own plagiaristic banner. Capcom, Sega, Microsoft and Square Enix have all fallen prey to the whimsical folly of attempting to bottle pure magic. All have failed.

Capcom’s Devil Kings was retarded, swapping a dynamic battle system for a smoke n’ mirrors approach to combat, helped along by cheap shots, awful visuals and a stunningly terrible localization from the Japanese original to the Western release. Sega’s Spartan: Total Warrior was a mess of disgusting escort missions and rubbish attempts at innovation such as “AI,” which made the game too hard. Ninety Nine Nights was incomprehensible, overly simplistic and glitchy. Then there’s Square Enix and Drakengard, which was just a big pile of semen. Not even good semen, the kind of semen that Bluto would produce.

Dynasty Warriors has a secret blend of eleven herbs and spices that renders it completely inimitable. Only a wanker would try and reproduce such a fine example of brilliance. That’s what those other publishers are — wankers. They’ve not published a single hit between them.

The Graphics Are Simply Beautiful!

Koei’s star development team Omega Force aren’t just innovators of gameplay. They are graphical innovators too, able to spin simple digital imagery into visual gold so nutritious, your eyes will be satisfied for days. Even in the PlayStation 2 years, Dynasty Warriors games were providing the kind of graphical accomplishments that we now demand as standard in the HD era.

The character designs alone are fantastic. Zhang He’s completely original prettyboy-with-claws look or Zhuge Liang’s savage parody of popular Christian celebrity Jesus Christ are just two of the two examples we’ve chosen to use. However, it’s in bringing these concepts to life in videogame form that Omega Force truly shines, with lifelike animations and environments so realistic, you could swear that your television set has turned into Ancient China.

There are also a number of advanced visual tricks employed to make the game look even better. Dynasty Warriors pioneered a gimmick known as “slowdown,” in which the framerate completely drops when a lot of action is happening onscreen. This is done to provide an atmospheric and jawdropping view of the battle as it happens. It’s also rumored that the scenes are so intense, anybody viewing the battle at normal speed would get their heads blown up like in Scanners. Another amazing trick is the use of disappearing characters, which adds an element of psychological fear into the game. Silent Hill, eat your heart out!

Perhaps the greatest feature, however, is the in-game camera, that sometimes goes into epileptic fits and makes it nearly impossible to see what’s happening onscreen. What an innovative and intelligent way of translating the chaotic feel of battle to the players at home. It’s very meta!

Dynasty Warriors is the best game series ever made because it’s simply better than everything else. More epic in scope than The Legend of Zelda, more intense than Gears of War, more intellectually stimulating than BioShock and better looking than Killzone 2. The efforts of Koei and Omega Force stand head and shoulders above the competition, shaming the industry with guaranteed quality, time after time.

Not since The Bible has mankind created such an important and life-changing symbol of achievement. The release of each new Dynasty Warriors sequel is an event, a paradigm-shifting phenomenom that leads the industry and ushers in a new and more glorious era each and every time. Loved by good, just and righteous people, hated by the envious, cowardly and perverse dullards who could not even aspire to play such greatness, let alone emulate greatness themselves.

This is why Dynasty Warriors is the greatest videogame series ever, and why anybody who disagrees is a spastic.