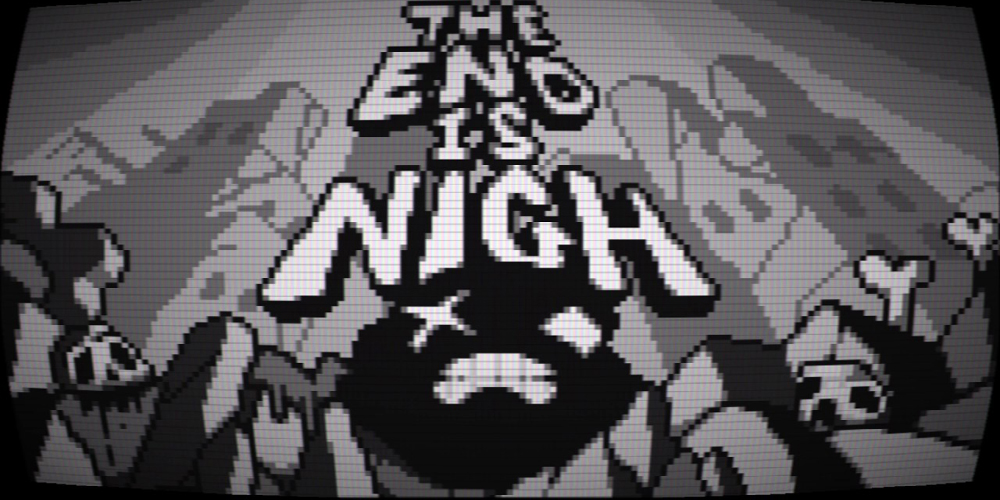 Here’s to hoping for a fucko-op mode update

The “Hang in there” kitten became a cultural icon for a reason. Sure, many say they only liked the poster ironically, but whether we want to admit it or not, the image of an innocent, desperate little animal hanging onto life by one paw is something most of us can immediately relate to. Anxiety is everywhere these days. We all feel like something is slipping away from us, and there’s not much we can do about it.

It’s not all bad though. Anxiety and excitement are two sides of the same coin. Both charge us up and get us to mentally rehearse plans for our immediate future. The difference, of course, is that anxiety is usually intertwined with feeling threatened, uncertain, and pessimistic, while excitement is colored by courage, confidence, and optimism.

There are moments in The End is Nigh that are genuinely exciting, usually when you discover a new secret or are about to collect a new game cartridge, but for the most part, the game is just a series of anxiety-inducing moments stacked on top of each other, with half-second periods of rest and relief in-between. Not only does that keep the game from ever slowing down or letting you become comfortably bored, but it also keep you motivated to keep chipping away at it. You want the things that hurt you to go away, and in this case, the things that hurt you are part of every stage of the game. The way to beat them is to analyze every inch of the world around you, create a plan to get through it, then execute that plan with expert skill and timing.

Sometimes that’s possible, but most of the time, it’s like picking a scab. You will eventually get it off, only to have a new set of challenges take their place. These new problems will ultimately cause you to fail and die. In fact, this is how the game starts, with a playable cutscene that you are intended to lose. And that’s where the fucks start.

There was some talk of the fucks being taken out of The End is Nigh, but those who download the game or pick it up at retail today will find that they are all completely intact. In fact, the game’s M rating is due almost entirely to language. There is a particularly heartfelt expression of betrayal, anger, and eventually acceptance over a failed relationship towards the end of the game which is mature in the truest sense of the word, but in the ESRB sense of the word, the only “taboo” content in this game is the f-word.

It would have been easy enough to bleep these swears out of the audio and replace them in the text, but Edmund McMillen and his partners at Nicalis decided against it. It’s likely that this decision cost them a lot in sales, especially at retail, but knowing Ed, the fear of failing to be honest was probably ten times worse than any financial anxieties that may have been at play in his mind. When I asked him why he kept the swears in, he said “When I started writing the story of the game it only had a few f-words. Back then I thought [of] possibly bleeping them because it wouldn’t lose much, but then late in dev those curses kinda set a tone and I ended up swearing a great deal in the game’s dialog, so I saw no point.”

This type of thinking speaks to the game’s general effect on the player. It is entirely uncompromising. That’s one of the many ways that it feels unlike Super Meat Boy, McMillen’s most famous 2D platformer, and the last game in the genre he developed before co-creating The End is Nigh.

Super Meat Boy is about throwing yourself against a wall over and over again, hoping that eventually, you’ll find a way to make things stick. At times, the game also feels like it was designed that way. It’s got no combat, and yet, it has boss fights. It exists in its own universe, and yet, it has playable characters from a huge range of unrelated games, including the Headcrab from Half-Life, Tim from Braid, and the Pink Knight from Castle Crashers. McMillen’s excitement for development, and his hopes of making it big on consoles, seemed to blast out of his mind like a shotgun and splatter all over the game.

The End is Nigh feels like the work of a surgeon by comparison. If you’ve played McMillen’s prior games, you can see the best parts of all of them here, but only the best parts. Anything he may have considered weaker, or irrelevant to the 2D platforming genre, did not make the cut. Likewise, the player must approach the game with the same type of surgical precision if they ever hope to survive it all. There’s no slimey, sloppy, mushing against walls here. Instead, the central mechanic relies on catching onto hooks and ledges in order to survive.

So like Super Meat Boy, The End is Nigh appears to have been made in the same way that it was meant to be played. McMillen was wracked with anxiety during its development, and it’s easy to imagine that he hoped to share that anxiety with his fans (particularly the one’s who stream his games on Twitch) in a way that connect them together, and in doing so, helps them to feel understood and cared about.

An even better way to meet that end would be to add co-op to this Switch port. While the game is a perfect copy of the Steam original, and the retail version comes with a lovingly-crafted instruction booklet and small, sticky replica of its star, it still feels relentlessly lonely compared to other Nicalis games on Switch like Cave Story+ and VVVVVV, both of which have co-op built in from the start. If one of the goals of The End is Nigh is to help players gain a sense of mastery over their anxieties, giving them the option to share those anxieties with a local friend would do a lot to further that aim.

I might not have said that before playing co-op VVVVVV with my family, but I found the single-screen stage platformer format was perfect for co-op, as it allowed the less-skilled player to relinquish responsibility to progress to the leader, freeing them to experiment, or even fuck with their partner. That freedom builds creativity, and eventually, enough skill to become a leader themselves. It’s a dynamic that would be perfect for The End is Nigh‘s brand of approachable horror. While the game’s perfect level design and commitment to its chosen themes are commendable, it would be nice to not have to face level after level of dread alone.

Filed under... #Impressions#Nicalis#Switch#The End is Nigh