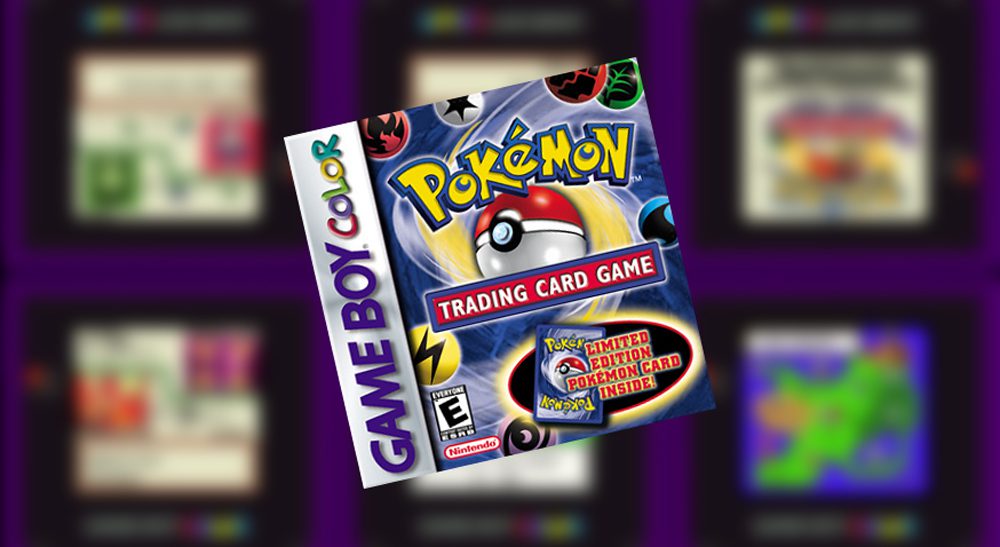 And why can’t this get an HD remake?

Growing up, I had a friend who was very into the Star Wars Customizable Card Game. He carried two binders with him throughout the fifth grade: one for his school work and one for all of his cards. I don’t know if he actually played it with other people — I certainly didn’t know of anyone else at school who was into it — but he loved to break that binder out at lunch to show us all the new cards he’d bought over the weekend. If YouTube was a thing back when we were kids, he’d probably have a channel of nothing but him opening booster packs that makes $125,000 a year.

I didn’t get the appeal of collectible card games, and as I grew up and was introduced to more of them, that opinion didn’t change. But in 2004, I started to soften to the idea of playing a game built around collecting cards and managing decks. That was the year Kingdom Hearts: Chain of Memories came out, and while I know its battle system is a major point of contention, it grabbed me hook, line, and sinker. I loved going through the menus trying to assemble the best deck possible, and out of that game, I found myself ready to give the genre a go. Or, at the very least, a video game version of it.

Unfortunately, the first two games I played were SNK vs. Capcom: Card Fighters DS and Marvel Trading Card Game. Nothing will turn a newcomer away from card games faster than something as shitty as those titles. Whatever goodwill in the genre Chain of Memories planted in me was dead by the time I gleefully traded them into GameStop for $2.

I have, in recent years, opened myself up to collectible card games once more with Shadowverse on my iPad. That game has let me dip my toes back into the genre without committing a lot of time or money, and it’s provided a sufficient amount of enjoyment. It’s allowed me to be a casual fan of card games, but after this past month, I think I’m ready to dive headfirst into the deep end. Because in 2021, I played Pokémon Trading Card Game for the first time, and all I’m wondering is what the hell took me so long?

If you’re unfamiliar with it, Pokémon Trading Card Game is an adaptation of the tabletop Trading Card Game (TCG) that was first released for the Game Boy Color back in 1998. It brought together more than 200 cards from the first three sets of the TCG, recreated them as best as it could on an 8-bit device, and packaged them in an adventure that would be familiar to fans who’d cut their teeth on the series with Pokémon Red and Blue. There are clubs to conquer, NPCs to challenge, grand masters to defeat, and legendary cards to collect. And all of it is fucking brilliant.

One of the greatest things about the game is its non-linear approach to progression. There are no routes to travel here, no grinding for XP. You can challenge any of your opponents in any order you want in order to get the sweet booster packs they cough up when defeated. You can bounce back and forth between two clubs or just continue to shift around your deck at one until you can manage a win. It’s really up to the player to decide how they want to proceed.

Unlike the games in the mainline Pokémon series, this has a very small number of opponents for players to face. But that’s probably for the best because battles against them can take quite some time. Once you do get into a battle, Pokémon Trading Card Game does an astonishing job of recreating the TCG experience with a single screen 8-bit device. The card games of today are spoiled by advances in technology, but Hudson Soft and Creatures Inc. knocked the presentation out of the park while constrained to 160×144 pixels and far fewer buttons than modern consoles.

Just like the real TGC, Pokémon Trading Card Game limits players to 60 cards in their deck. You can build your deck out of Pokémon cards, energy cards, and trainer cards, and decks are shuffled at the start of each match. Each player can have one Pokémon in battle at a time and up to five on their bench. Pokémon cards have a move or two associated with them that requires an energy card to utilize. The first player to collect all of the prize cards, or eliminate all the Pokémon on their opponent’s bench, wins. But as you’ll quickly find out, the road to victory is a mix of skill and luck, and a lot of the time, the odds just aren’t in your favor.

Throughout my adventure on TCG Island (yes, that’s what they called the island here), I fought my way through bad draws at the beginning of matches and terrible luck with coin flips. I had battles wrap up quickly thanks to great starting hands, but I’ve also had to sit through matches that dragged because of poor initial pulls for me and my opponent. But even when they feel like they’re going on forever, they’re never dull. 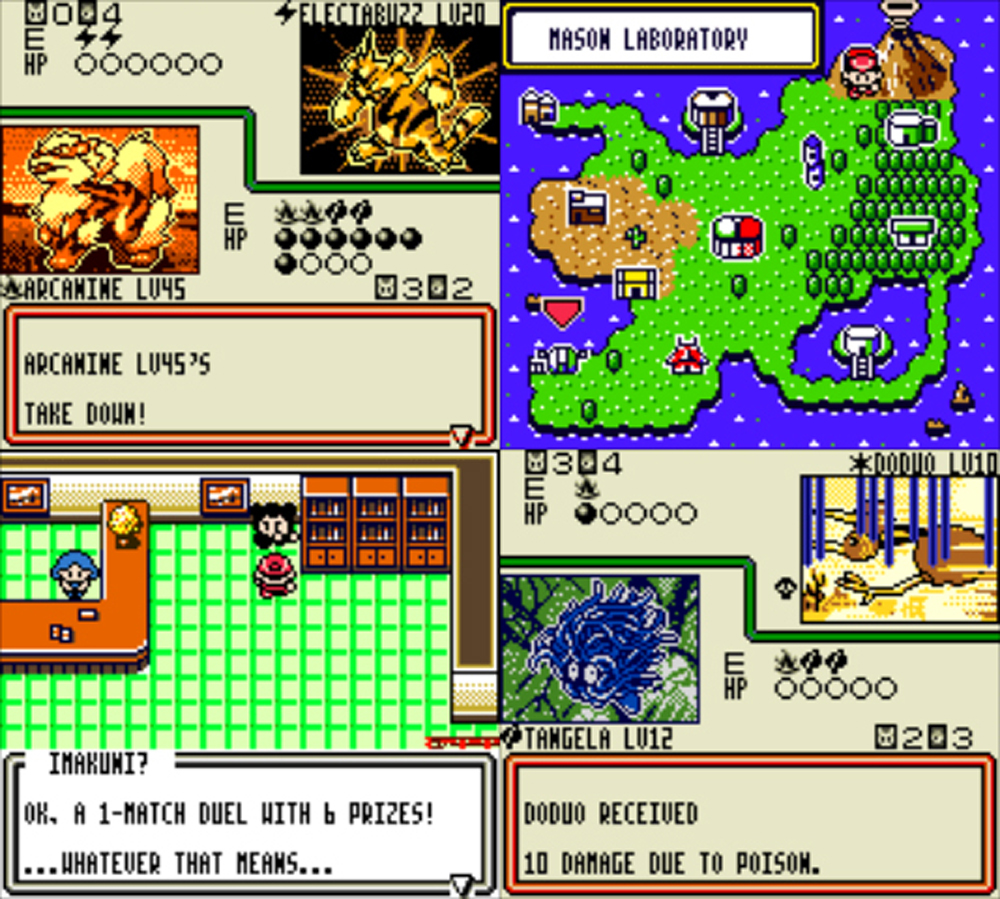 I’m surprised how much I got into the drama of these battles. I had matches where certain victory slipped through my fingers thanks to a few bad flips of the coin, or I managed to come back from the edge of defeat with several card draws in my favor. It’s exhilarating, and I can’t remember the last time a Pokémon game had me on the edge of my seat like this.

It can be incredibly aggravating too. I played matches where coin flips went against me eight times out of 10. My first battle against the Water Club Master took nearly twenty minutes, only for me to come up short against her. In our second match, she wiped the floor with me because she was able to evolve her Squirtle into a Blastoise in four turns while I was still trying to add a second ‘mon to my bench.

As frustrating as the lack of luck can be, it never demoralizes me. In fact, it has the opposite reaction. The more I lose, the more I want to fight. Even when the same opponent beats me five times in a row (thank you very much, Mr. Lightning Club Master), I never want to give up; I never want to quit. Which is totally not how I usually am. I’m very much a quitter in the face of even slight adversity if my write-up on Zelda II is any indication, but with Pokémon Trading Card Game, it’s like there is this drive in me I never knew existed.

Maybe it’s because, truly, every defeat is a learning opportunity that pushes me back into the menus to fine-tune my deck. Just like with Chain of Memories, I’m spending a great deal of time figuring out my optimal deck configuration for each encounter, trying to find the right balance of the three types of cards. In the beginning, I was just mixing things up to see what would happen, but now that I’ve just finished my sixth club, I’ve become obsessed with building unbeatable decks.

And obsessed is not something I thought I would be with this game. I have to thank our own Dan Roemer for putting the idea in my head last year to give this a try because I have no qualms in saying this is one of the most addictive games I’ve ever played. It’s a real shame we never got an official western release of the sequel because I know once I finish this, I’m going to want more. I guess my only hope is when I do watch the credits roll on Pokémon Trading Card Game, SNK will be ready with that Switch port of the Neo Geo Pocket Color’s SNK vs. Capcom: Card Fighters Clash that we’ve all just be waiting for it to announce.