Let me start off by saying that there are still a number of unknown factors when it comes to Diablo III. The items involved, the drop rates, and plenty of other elements make it difficult to pass judgment on what a real-currency Auction House is going to do to gameplay.

But I need an outlet to express how I feel this system is going to change — or possibly even ruin — the game from the get go, and what more perfect an outlet than here right? With the Diablo III beta going on right now, this is a nice opportunity to revisit the discussion.

The first two scary rumors I have read so far are that there will be almost no soul-bound items, and you will also have access to the Auction House from anywhere in the game. My very first thought was “Great, now gold farmers are going to be able to sit in the same exact spot 24/7 and sell that epic item with a very low drop rate as soon as they get it.”

I think what some developers fail to understand is that people are actually paid in third-world countries to sit behind a computer on their shift and farm in that same spot for hours and hours. When the next person comes in, they jump right into that same seat and go from there. These farmers literally never log off unless they have connection issues or the servers go down for whatever reason. I remember back when World of Warcraft first started and farmers would sit in Scarlet Monastery farming nonstop for certain weapons. At least then they had to leave for a period of time to get to put their items up for auction.

The whole soul-bound issue is making this even worse. For the players that actually want to earn their in-game money like a normal person, this is great considering they can play Diablo III fairly and have a lot of different options to sell gear, but this is a disaster when you add in a real-life-currency Auction House. This is just going to increase the amount of farmers and bots used in the game because they will need to cover more territory.

The biggest problem here is that items worth a couple of dollars will never be farmed. They will be destroyed or vendored. The only thing the farmers will be after are items people are willing to pay hundreds of dollars for and when you add in Auction House access from anywhere, the gold farmers will be able to spike up prices extremely high simply because they will be the only ones ever around to actually get the chance at that four or five percent rate. 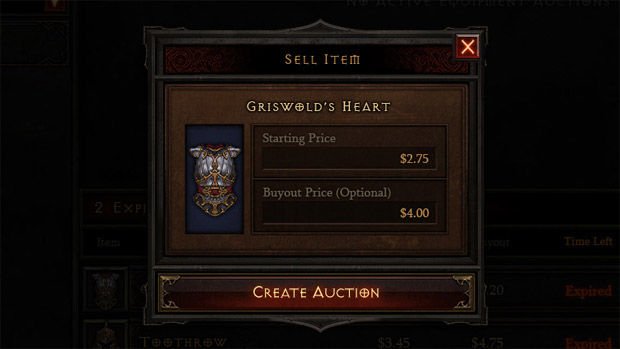 This is Not Second Life

You know, maybe this is what Blizzard had in mind? It’s quite possible. I am not sure how many of you have ever played or researched Second Life, but it can be a money-making machine if you are good with programming. It gives developers a platform to create just about any 3D item you can think of and you’re able to sell those items in-game for currency which can then be sold for real-life currency. I have seen documentaries on television and many articles online of different people that have literally become millionaires off the game.

Or maybe it is just the fact that Blizzard knows so many people are willing to pay for currency playing World of Warcraft that they want to develop a system allowing them to cash in on the sale of currency also (as if 4 million Americans paying 15 dollars a month isn’t enough money for Activision/Blizzard.) It is truly difficult to understand the thought process Blizzard has in mind for a real-life currency auction.

I am very, very scared to see how this is going to pan out for Diablo III and Blizzard. In theory, this can be a great idea for both the developers and the consumers. The problem is that for it to be successful, you need restrictions and control over valuable items that go for high prices. The average person playing the game for fun will enjoy making a couple of bucks off that epic item earned every time they run a dungeon. The real problem will be seeing how the gold farmers are going to benefit from all this. I just hope Blizzard has some plans in mind.