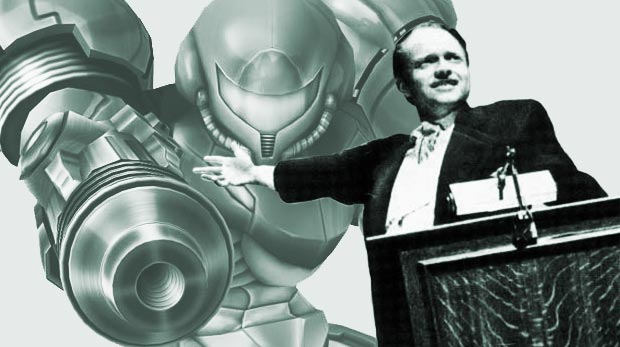 If you’re the kind of person who just looked at the title of this article and said to yourself, “Wait — that sort of thing has to be proven?”, then watch this. Your short-term questions will be answered.

If, like many others, however, you watched or read Michael Thomsen’s treatise on why Metroid Prime is gaming’s Citizen Kane and wanted to hear a rebuttal consisting of more than a few incredulous facial expressions and a profane outburst, then you might want to read further.

I’m tempted to add more background or summary just to get a third paragraph of introductory gibberish in, but that’s pretty much it. Thomsen thinks Metroid Prime is comparable to Citizen Kane, and I think such a stance is borderline idiotic.

Hit the jump for my reasoning, absolutely none of which is a direct assault on the game’s quality.

First off, I’m going to agree with Thomsen on one particular point: it’s not entirely unreasonable to make comparisons between works from different mediums. The whole “Citizen Kane of games” cliche may be tired and silly, but it’s not outright pointless. When someone talks about the “Citizen Kane of games,” they’re (hopefully) not trying to discuss how films and games are similar, or how one genre should be like the other, or how games need to be as respected as Citizen Kane now is in order to be taken seriously.

The comparison simply deals with utilization of a medium’s strengths. Citizen Kane used cinematography and editing (tools specific to the medium of cinema, and cinema alone) to convey particular ideas or emotions that complemented, enhanced, and reflected back on the narrative. Welles didn’t use deep focus or forced perspective because they looked kinda cool — he did the things he did because they evoked specific emotional and intellectual reactions in and of themselves, in a way completely unique to cinema. Under Welles’ direction, the filmmaker’s tools of the trade were no longer a simple means to an end, but rather became provocative rhetorical devices in their own right.

So, no, I don’t think it’s unreasonable to ask or search for a game that utilizes videogame-specific strengths to convey particular ideas or emotions.

I do think it is unreasonable to say that Metroid Prime is that game, and then back such a hefty statement up with a series of completely irrelevant examples.

Thomsen’s argument is that in the same way every aspect of Kane unites to tell the story of the protagonist and convey the film’s themes, every aspect of Metroid Prime‘s design contributes toward…well, I’ll let Thomsen speak for himself:

“In the same way that Citizen Kane harnessed every technical component in film to express its post-mortem reassembly of an irrepressible and heartbroken man, Metroid Prime uses all of its technology to recreate the experience of a woman abandoned on an alien world inhabited by the ghosts of its prelapsarian inhabitants.”

Consider that sentence. Really consider it. Roll it around in your head. Read it a few more times. Speak it aloud. Think about the implications of what is actually being said in that single statement. Really — do it.

Because it is one of the single silliest sentences you will ever read.

It’s not that it’s incorrect — far from it. Much of Metroid Prime‘s cosmetic design, and many of its mechanics, do indeed dramatize the experience of being alone on an alien world (though, as commenter Tubatic pointed out, Thomsen’s description of Samus as being “abandoned” isn’t correct; Samus can leave whenever she wants).

The problem is that this comparison completely disregards the historical and artistic weight of the Citizen Kane comparison by focusing on arbitrary, irrelevant similarities between the two. Thomsen opens his editorial by drawing arbitrary similarities between both projects’ similarities during production (both almost got canceled a lot, both had gifted people working on them), then goes on to say that you care about Samus because, rather than being given info through a noninteractive cut scene, you are reminded of her humanity everytime you see her reflection in a laser blast. Everytime she winces in pain. Everytime drops of water bead on her visor.

Firstly, you could make the same arguments about the irrelevant cosmetic choices in most videogames. In the original Mario Bros, you are never allowed to forget that you are playing as an italian plumber. Never. His avatar is constantly on screen, and when he dies, he turns to the player with an expression of sad resignation and an equally dejected shrug. The player is never informed of Mario’s motivations, mood, or existence through the cinematic tool of cut scenes. But who the fuck cares?

Seeing Charles Foster Kane infinitely reflected in a series of mirrors speaks volumes about the man, the plot, and human nature in general; it conjures up thoughts of seeing a man fade away into the distance, yet also the powerful sense of a being whose power and pride falsely make him feel eternal and larger than life. A single shot from Kane uses cinematography, editing, acting, and all the other film-specific tools to convey incredibly complex and deep ideas without actually using words.

Seeing Samus Aran’s eyes reflected in her goddamn visor doesn’t actually say anything. It says: you’re playing as a human woman. It says: you just fired a particularly powerful blaster shot at something which is very close to you, and this is your visual reward.

Citizen Kane uses its cinematic conventions to express verbally inexpressable concepts of loss and pride and hate and corruption and sanity and the fractured nature of truth and reality. Metroid Prime uses its graphical touches to express the story of Shooting Space Pirates in the Face.

I don’t want to play the snobbish art critic and claim that escapist art is somehow inferior to highbrow fare, but for Christ’s sake — the man is likening a work of incredible thematic depth and emotional complexity to a game which is about nothing more than having fun, solving puzzles, and shooting stuff. That‘s what you’re going to show to Ebert to convince him videogames are a legitimate art form? You’re going to show him the morph bomb and expect him to nod repeatedly, and admit that the story of an extinct bird race and a woman with a bazooka on her arm is just as meaningful as La Dolce Vita? Seriously?

If you want to really stretch and attribute completely ludicrous meaning to this aesthetic choice, I suppose you could argue that Samus is a creature of violence and death just like those she fights, and every blaster bolt attempts to frequently remind you that you, as Samus, are a reflection of that which you destroy. But that would be idiotic, and completely unsupported by the narrative or gameplay. And that’s not what Thomsen was saying.

Thomsen was saying that these game-specific methods of conveying intensely shallow information make Metroid Prime similar to Citizen Kane. Even if the information the player received were not completely irrelevant, however, one single point would still prove Thomsen’s argument entirely untenable: the cosmetic touches he describes are not specific to videogames.

When Samus Aran cries out and water beads on her visor, that’s not gameplay. It’s not even specific to the medium of videogames — you could put those exact same visual touches in a film, or painting, or graphic novel, and nothing would be lost. Nothing about the player’s interaction reflects, or is reflected back by, those cosmetic touches (except in that the visual feedback is initiated by the player’s actions, which in itself isn’t a good enough reason; so are cut scenes, which are just as noninteractive as the water droplets).

You wanna talk about the Citizen Kane of videogames? Then why not talk about games where actual gameplay conveys ideas and emotions rather than pointless cosmetic crap? Why not talk about the mechanical metaphors at work in Braid, or the murder mechanics of Shadow of the Colossus, or a thousand other games that actually attempt to explore the aesthetic power of interactivity? I would never argue that any of these games represent the Citizen Kane of gaming, but they’d be infinitely better examples than a game whose artistic merits don’t extend beyond the surface-level nonsense Thomsen cites.

Yes, sure, you can infer some relatively shallow plot details from the environment, which is a completely game-specific method of conveying story. However, a hundred games accomplish this goal with much more depth and efficiency than Metroid Prime (Portal, BioShock), and, again, I’m not sure I’d even compare those games to Citizen Kane.

Because games are so disrespected by the mainstream (a group which, presumably, the viewers of ABC belong to) that when you compare something to Citizen Kane, you’re not just saying that the two works are similar in a few different ways — you’re saying that the work represents a watershed moment for its given medium. You’re saying that it’s incredibly important to the canon. You’re saying that this work, while it may not be your personal favorite, showcases the strengths of its own medium like no other work. Whether you want to or not.

But Thomsen compares the two works, and what does he come up with? An argument that can be effectively boiled down to:

– You can see water droplets on her visor

– There aren’t any cut scenes

– Both are sort of hard to put into defined genres

Thomsen didn’t call his article, “A few ways in which Metroid Prime is like Citizen Kane in certain respects.” If he had, you wouldn’t be reading this article. No — he argued that Metroid Prime is “our Citizen Kane.” To make a statement with that degree of artistic and historical weight, and then back it up with such intensely shallow examples, is fucking ridiculous. It would be equivalent to me arguing that Peanut Butter Crunch is the Christian Bible of breakfast cereal because both have the letter “B” in the title.

I quote Niero, our site’s founder:

“Here’s an opportunity to showcase how far storytelling in video games has come to the non-gaming general public on prime-time television. As these people are inching towards their television to see what they’ve been missing in the world of video games, they are reassured that they’ve missed nothing — it’s still just a sci-fi nerd hobby where [a hero with] an arm cannon blow[s] away space bugs.”

As games writers, we’re not responsible for changing the way the rest of the world thinks about games. I’m not even sure if it matters that the rest of the world takes games seriously. But I do know one thing: that Citizen Kane is Citizen Kane, and Metroid Prime is Metroid Prime, and comparing the two on the Web site for one of the major news outlets in America in the most shallow and irrelevant way possible kind of makes our most beloved art form look like kid’s stuff, and us like a bunch of idiots.

And so, I ask again: are you fucking kidding me?