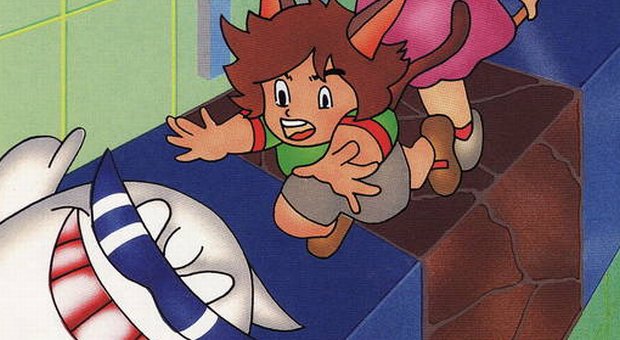 Every Wednesday, we profile a forgotten or underappreciated game for our “Games Time Forgot” series.

Time travel. Not only does it make for an interesting plot device in games, but it’s also been quite popular as a game mechanic as of late. In 2008, Braid was critically acclaimed for its time rewind and fast forwarding functions, among other things. Before that, games such as Blinx the Time Sweeper and Prince of Persia: Sands of Time made good use of similar mechanics. When speaking of time travel in gaming, these are usually the only examples to come to mind.

It’s obvious that the past two console generations have been a breeding ground for time travel-centric games. Some may be under the impression that recent technology has only just made such games possible; I was once under that  impression too. But as it turns out, that is not the case at all. Giving players the ability to bend time to their advantage is nothing new, it’s only just becoming popular. There was a little known Braid-esque gaming experience all the way back in 1990: Catrap for the Game Boy.

I only recently picked up this game purely out of curiosity, with a bunch of other extremely cheap Game Boy games I didn’t recognize the names of. As I tried each one, it was blatantly apparent that someone had traded in the worst, most obscure games in their collection. It was one horrible experience after the other.

Then I put Catrap into my GBA SP, not expecting much in return from it. When it turned out to be not only a great game, but also the granddaddy of the time travel mechanic, I was flabbergasted. Why was this piece of gaming history in a neglected case at my local GameStop?

But first, let’s take a closer look at the game itself and how it plays.

Like most games of its time, Catrap (which is simply a portmanteau of “cat” and “trap”) had a bareboned story. The two playable characters, an unnamed boy and girl, were cursed with cat ears and tails prior to the start of the game. On top of that, they were thrown into a huge labyrinth filled with monsters. The only way that Catboy and Catgirl can change back into humans is to defeat every last monster in the maze. That alone doesn’t sound like such a difficult challenge… except for the fact that your character can not jump. Granted, walking straight into enemies automatically punches them out, but it’s getting to them that’s the problem. There is almost always an obstacle or gap in the way that you cannot pass on your own. Enter Catrap‘s unique (for it’s time, and heck, even today) puzzle system.

Besides enemies, platforms and pits, levels may also have giant boulders, ladders, and breakable blocks. You must climb, push, and break these items in ways that will help you get around. For example, if there is a pit and a boulder in front of you, you can push the boulder into the pit and walk across it. This is a very simple example of Catrap‘s puzzles; they get much more difficult as the ways in which the rooms are laid out change from level to level. New enemies that have different properties, such as ghosts that stay in the air even if you remove the ground from beneath them, also add challenge as you go.

The most interesting aspect of the game play is the aforementioned time travel mechanic. Trial and error plays a big role in the puzzle solving method, so getting stuck in a place where you can’t move is pretty much always an inevitability. This is where time travel comes into play. Whenever you need to undo anything you’ve previously done, holding down the A button will rewind time. The longer you hold it, the further back you can go. You can also redo the moves you’ve made with the B button. Unlike most other games with this mechanic, there is no limit to how many times it can be used. Rewinds can take you all the way back to the start of the room if needed.

All 100 puzzles can be accessed from the main menu at any given point, so you can play them in any order. If you get stuck on what to do in one room, you can go to another and revisit it later. After every one is cleared of enemies, a special room becomes playable. The game has no save function, which is unfortunate for a game of its length. However, there is a password system in place, so it’s not too bad when you have to turn the game off.

As for why such a phenomenally great game was in the bargain bin among a throng of other unknown crappy ones, Asmik Corporation is most likely to blame. They were the company responsible for bringing Catrap to the US. They’ve never been a very well known name in games to begin with, but on top of that, most of their releases have been pretty weird and not very well recieved. It makes sense that the one time they localized something great, it went largely unnoticed. The game had a weird story, bad box art, and probably no marketing whatsoever. It’s not very nice on the eyes or ears either; if you find yourself time traveling a lot, you’re bound to become tired of the dingle-dingle-dingle-ding that accompanies it.

It may also be because Catrap was a game that was too far ahead of its time. Most games of the same genre for the Game Boy, such as the best selling GB version of Tetris, required only simple thinking and quick reflexes. Catrap placed emphasis on deeper thinking. You have to look around each room, figure out where things should be pushed or taken away, and then test your theories. It’s much harder and more time consuming than most other portable puzzle games (its level timer not only counts minutes and seconds, but also hours). Perhaps it was not the best choice for gaming on the go back in 1990.

But today, gaming experiences like portable RPGs are in high demand. Portable gaming no longer necessitates simplistic gameplay. And now that the puzzle/platformer hybrid is so popular, what with Braid and Henry Hatsworth and all, it’s the perfect time to give Catrap a second look.

It’s not often that I can play an old game for the first time as an adult and find it as enjoyable as I do the games I’m more familiar with. I wouldn’t waste your time talking about a 1990 Game Boy game if it were not something special, and Catrap is. Mediocre production values aside, it’s got really solid game play that had me flashing back to my experiences with Braid quite often. It’s got mind bendingly hard puzzles that are so, so satisfying when finally solved. It’s not got the same soul that Braid has, since the story and aesthetics of Catrap are laughably weak, but it’s got the same amount of heart.

It’s also got some great programming for its time. The rewind/fast forward buttons function almost exactly like Braid‘s, albeit a bit slower. It was an amazing discovery to find that such a mechanic existed over 20 years ago, and we’re only just now seeing it being used a lot. The Prince, Blinx, and Tim may have made time travel a mainstream game mechanic, but the cat eared duo from Catrap just happen to be their grandfather and grandmother.