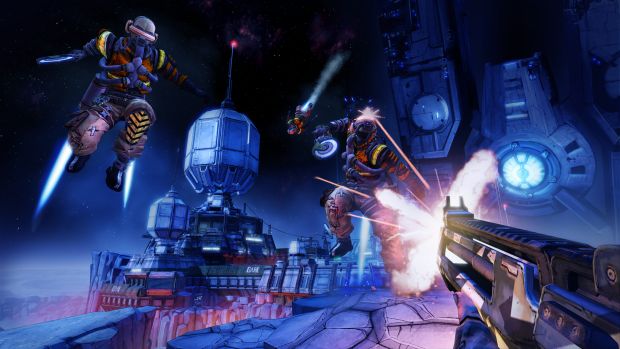 The industry is currently trying to support two generations of consoles at once, which means game publishers have to decide what the safest bet is for their next projects. Some companies are creating the the same content for both last- and current-gen, while others are just focusing on creating experiences against “next-gen” specs.

In the case of Borderlands: The Pre-Sequel, it’s going to be sticking to the PlayStation 3, Xbox 360, and PC. Why? Mostly because developer Gearbox wants to release on platforms they feel their customers already have.

“It’s more about the fact that we know that the biggest customer for [Borderlands: The Pre-Sequel] is a person who loves Borderlands, and 100% of those customers are on the platform that we’re supporting,” president of Gearbox Randy Pitchford told us. Pitchford feels that with Borderlands 2 moving well over eight million copies, “there’s more people that bought Borderlands 2 than there are installed units of Xbox Ones and PlayStation 4s. Meanwhile there’s 150 million installed PlayStation 3s and Xbox 360s.”

“It’s a tricky thing,” Pitchford continued, “cause I’m a crazy hardcore gamer and I’m right on the cutting edge — I have all the new stuff as soon as it comes out … we’re all dying for new content, but we have to remember that our fans, the people that have supported us — they don’t necessarily have the same kind of disposable income that we do and they’re not as quick to adopt the new platforms. The idea of leaving any of those guys behind is just something that we couldn’t feel good about.”

So the question then becomes, why not also do a next-gen version on top of last-gen? “It’s not impossible, but it does take time and people,” Pitchford explained. “We decided to take the entire amount of people that could be dedicated to this game and actually make the game better with those people instead of spending time on technology, and it costs money to be on the new platforms. We’re pretty certain of the people that have already gotten the new platforms, almost all of them have the earlier platforms.”

One can suspect that The Pre-Sequel wouldn’t look nor feel significantly better on the latest generation of hardware in any case as the new game is based on the Borderlands 2 engine. With the engine optimized already for the platforms of choice, this leaves 2K Games Australia to create some new experiences for players, like the jetpack.

Meanwhile, this leaves Gearbox Software themselves to focus more on their upcoming projects. Earlier in the presentation, Pitchford told us that as much as the studio wants to focus on Borderlands, they needed to dedicate their attention towards new things, including “trying to figure out technologies for new platforms.” One can assume another Borderlands is in the works for the new hardware, but until they’re ready to show that off Borderlands fans have The Pre-Sequel to hold their attention.