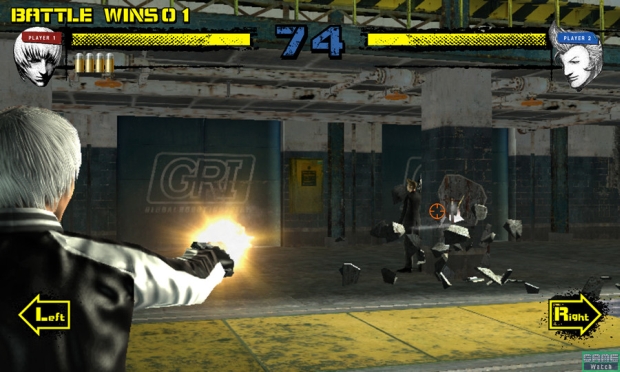 Every Wednesday, we profile a forgotten or underappreciated game for our “Games Time Forgot” series.

The last time I wrote a Games Time Forgot article, I highlighted Rambo, the most beautifully idiotic shooter I’ve ever played. This time around, I want to talk about 2 Spicy — an arcade game equally idiotic in its narrative premise and style, but remarkably more intelligent and nuanced than Sega’s other superviolent light gun game.

It’s a cover-based shooter for people who hate cover-based shooters. It’s a fighting game, except players use guns. It’s a shooter, except you only fight one other person at a time. It’s incredibly fast-paced, but also unusually strategic for a stand-up arcade game.

It’s 2 Spicy, and I’ll try to explain why it’s worth your time after the jump.

I dunno. Something about a dystopian future and an increase in violence and blah blah blah the game is called 2 Spicy for fuck’s sake.

Worth mentioning, however, are the characters. In keeping with 2 Spicy‘s fighting game aesthetic (more on that later), no two characters are even remotely similar to one another. Laurence is a gargantuan fatass wielding a shotgun. Sicks is a skinny emo dude with a revolver, who automatically cloaks if he stops shooting for long enough. All eight characters feel markedly different from one another (don’t attempt too much running around as Laurence, unless you’ve got an addiction to lead), and if the game had become more goddamn popular in the States than it currently is, Charlie and Ming-Hua might be as recognizable as…I dunno. That creepy dude with the knives in SoulCalibur. I don’t play that many fighting games.

Every single battle in 2 Spicy feels like a true duel. Countless games have tried to emulate the whole John Woo, “two dudes firing at one another without ever running out of ammo in a high-caliber version of a Kurosawa samurai fight,” but none have succeeded as remarkably as 2 Spicy. Each player has a sizable health bar, a la every fighting game ever made, and individual bullets don’t really do that much damage. Your goal isn’t so much to just focus on speed and aim (as is the case in Max Payne, Stranglehold, et al), but to hurriedly find new ways of taking out your opponent while frantically moving from cover to cover.

You could, for instance, try to stay still and blast your opponent whenever they peek out of cover. But what if they move to another piece of cover that just happens to give them a perfect view of your exposed side? Suddenly, you’ve got to run to new cover, while shooting, while trying to keep your aim steady on them so your crosshair will zoom in and grant you a damage bonus. You can do a great deal of extra damage by destroying cover while your opponent is behind it, as well; do you attack your opponent directly, or try to whittle away their defenses and leave them nowhere to hide?

The game isn’t so complex that it’d lend itself to endless playthroughs on a home console in a stress-free environment, but it’s still a remarkably deep experience for an arcade atmosphere. After playing Rambo, Crisis Zone, and Time Crisis 3, I went into 2 Spicy fully expecting to lose myself in another mindless shooter that challenged only my ability to shoot fast and aim well. I didn’t expect to engage in a series of pleasingly protracted wars of attrition filled with destructible cover and the style of a fighting game.

Why you’re not playing it:

It’s also a remarkably difficult one to describe, at that (“it’s a fighter-cover-based-light-gun shootemup duel. In many respects, it’s an ideal arcade game in that it provides an experience you basically can’t get on a home console, but that same uniqueness prevents it from ever achieving a huge following amongst console owners (unlike Marvel vs. Capcom 2, Street Fighter 4, etc). Even if Nintendo decided to port the game to the Wii, every single player would still need to own a Wii Balance Board to still experience the full effect.

But, yeah. It’s an arcade game.