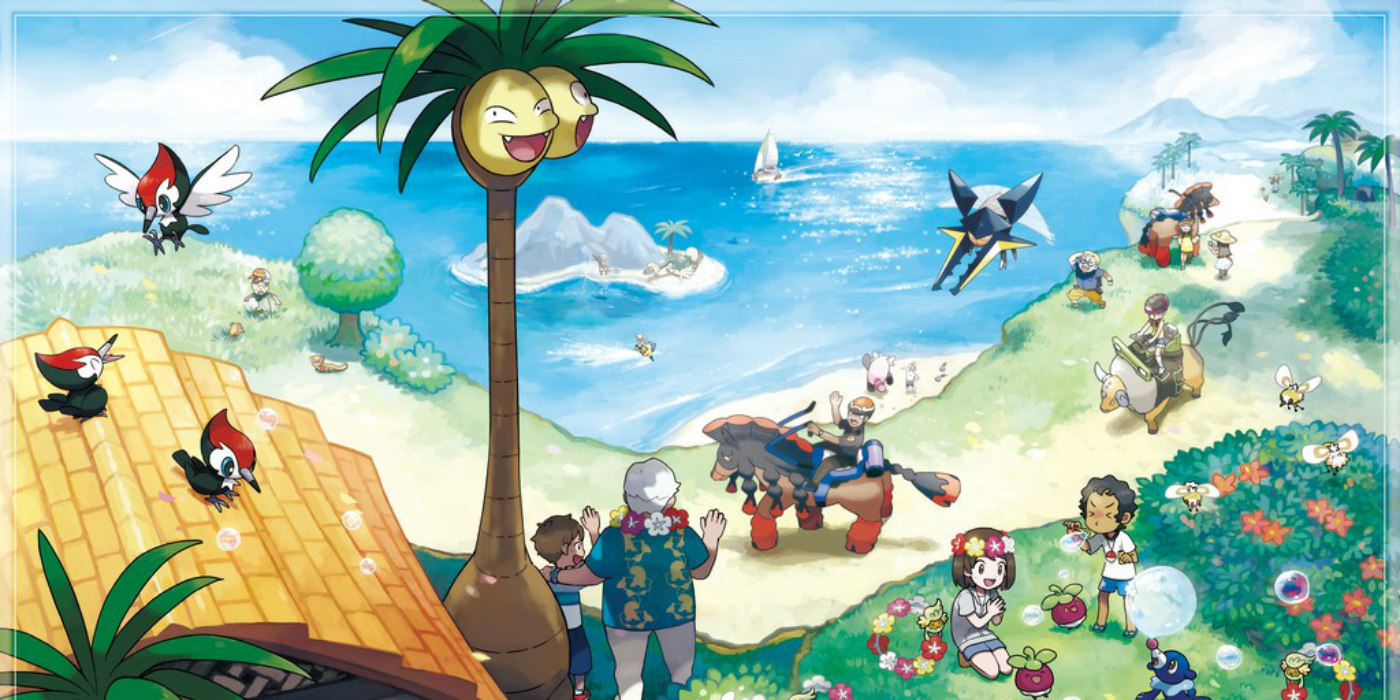 Ready to be the very best?

By the time this goes up, we’ll be less than a week before the release of one of Nintendo’s most anticipated titles for the year, Pokémon Sun and Moon. From what Nintendo has drip fed us over the past year, it has been teasing some major shake-ups to Pokémon’s identity mechanically such as the removal of the HM system, battling Totem Pokémon, and the Island Challenge in the stead of the traditional gym and Pokémon league journey. And inevitably, no talk about Pokémon is complete without bringing up your favorite choices.

One of my favorite aspects of the Pokémon fandom is the trainer card, a quaint image most people make on pokecharms.com to display their ideal Pokémon team or even just their favorite Pokémon. Several months ago, on a whim, I inadvertently started a trend in the quick posts that got everyone sharing their own trainer cards. This past week, I asked them to share their trainer cards again, this time to celebrate the release of Sun and Moon, as well as seeing what some of our community members are looking forward to when they get their grubby mitts on the game on November 18. Most are likely free to enter the game clean to view the game as a blank slate where people like me, who have been following the info dumps like a hawk, have their curiosity tanks to bursting from interesting tidbits like where the battle meta may go.

For example here’s my trainer card…

And the thing I’m most excited about is seeing the influx of brand new fairy Pokémon. This will be the first proper generation since fairy’s introduction in X and Y. Since ORAS simply brought in new megas but no new entries in the national dex (and thus, no new fairy Pokémon), Sun and Moon are obviously bringing out tons of proper, new fairy Pokémon to really flex its place in the type chart.

And here’s what some participating community members are looking forward to in Pokémon Sun and Moon.

KeithTheGeek said:
I gotta say that I’m really looking forward to the single-player content. After how incredibly dull and tired X and Y felt, it feels like Game Freak is coming back reinvigorated and ready to try new things. For better or for worse, this will be one of the most unique and different generations of Pokémon games we’ve had yet.

GameManiac can’t wait to get down and dirty:
Personally as of right now, I’m pretty excited for the new Pokémon. There’s some goodens, and I can’t wait to play Muk and shove him in Bass’s face till tears rain down on the ground. The Alola forms are a great way to redo old Pokémon and make them interesting again. I’m going for the new Marrowak, the new Muk and also that dank Sandcastle ghost Pokémon because it’s some cool shit. Also the changing up of gyms and the changes to HMs and whatnot sound like they could be nice, for sure.

Sailor Zebes knows that trainer customization is important:
The thing I’m most excited for is the return of trainer customization! As for the Pokémon themselves, I’m looking forward to getting Sandslash or Ninetails the most. But if we’re talking about strictly new Pokémon, then I’d have to go with Vikavolt and Palossand.

Blondebass is hard to please but:
I’m going to get Sun/Moon because I get every Pokémon game. While gen 6 felt like a step backwards, it was still a very enjoyable game… And since Sun/Moon is similar to gen 6 except for the game’s objectives, I should have a good time with it too.

Dephoenix is happy for a smoother experience:
I’m fairly excited for S&M. Hopefully I’ll be done with Dragon Quest Builders by then. As for what I’m excited for about S&M, I like that HMs are gone, as they always seemed counter-intuitive to me. Also the setting seems really neat, so I’m looking forward to that. I’m hoping the game manages to get my interest more than Pokémon Y did. I could not get into that game.

LaTerry wants a clean experience:
I tried to pick a favorite from each gen and still keep it somewhat balanced. Also Raikou. My hype for Sun and Moon is reaching dangerous levels, like it does before any new gen. I’ve been trying to stay in the dark about it, but it’s been especially difficult this time with how much info they’ve been pumping out all the time. I’m most excited to see what new Pokémon there are, and other Alolan forms that they haven’t revealed yet.

JPF720 hasn’t been in one for a while:
Having entered a sort of hiatus from the series after Diamond, I came back to it for X and had such a great time that it reinvigorated my love for Pokémon. And S&M seeming to take a slightly different approach with the new setting and whatnot only helps!

Agent9 is curious of the new IV trainer:
I’m really digging most of the new Pokémon now, especially their abilities. I’m also interested in the new IV training which may make for decent post game, provided a method like Blissey bases still exists. Now I can finally train and keep my Pokémon without tossing them for better ones later.

Finally, HMs are gone for Zalno:
I’m glad that HMs are FINALLY being removed from the game. And it only took 7 generations to accomplish! I’m also glad that Hyper Training allows me to get a max IV Pokémon without having to go through the arduous process of breeding. Alolan Forms are an interesting twist to the typical Pokémon additions, too. Alolan Marowak is my favorite so far.

SrChurros picked the perfect trainer for his card:
I thought XY was a huge improvement in game flow already, but I’m amazed to see how much effort went to improve game flow and user interface. The fact that they are abandoning grid-based movement makes the new world of Alola seems more like a world I can be immersed into. Also, this will be the first time that me and my girlfriend will be able to start playing a Pokémon game together since we played Fire Red/Leaf Green four years ago.

And the new Pokémon are cute af.

ScionVyse isn’t super pumped but still liking it:
Honestly, there isn’t really anything that Nintendo’s shown that hasn’t got me excited, but if I had to choose one, I’d say I’m excited to use all the new Pokémon. The designs have all been fantastic and so many of them seem super unique and cool.

No more fluff, says GoofierBrute:
As for what I’m most excited for, I think the fact that the games are removing a bunch of the fluff like needing to use HMs to clear stuff out of the way is pretty cool.

Qalamari agrees:
Ridable Pokémon, the gorgeous Hawaii-inspired setting, and new critters added to the roster. I’m also beyond glad that the vestigial HM move locking is finally going away. So long, Biderp, you can ride out the next thirty years in someone’s PC.

And because I’m really nice, everyone else’s cards despite not telling us what they’re looking forward to.