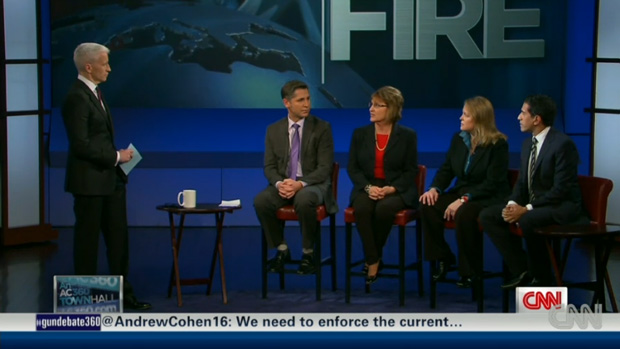 It might be easy to label all major news pundits as being dangerously ignorant of videogames, especially when it concerns sexual or violent content. However, we ought to know better than to paint everyone with the same broad brush strokes. Believe it or not, there are in fact media personalities who don’t immediately jump on the “games are evil” narrative.

Earlier today, Jim discussed CNN’s Erin Burnett and her obvious agenda. But on the very same channel, we have Anderson Cooper, a man far more sensible and open-minded than his peers.

Last night, I tuned in to Cooper’s Town Hall: Guns Under Fire special, where a guest panel discussed possible ways to address gun violence in America in the wake of the Sandy Hook shooting and related events. While videogames weren’t the primary focus of the discussion, the topic undoubtedly came up, and I’m pleased that they were able to address it in a cool, level-headed manner.

You ought to check out the entire thing, but if you just want to watch the videogames segment, it’s this clip labeled “The mental health stigma and violence.”

Cheryl Olson, co-author of the games violence research book Grand Theft Childhood, was on hand to once again point out there is little evidence to support any link between violent games and real-world violence. From her studies, she learned, “[T]he typical 13-year-old boy is playing at least one mature-rated violent game on a regular basis. And when you are looking at something very rare like a school shooting, and something that’s statistically normal like playing violent videogames, it’s kind of hard to make that link.”

The discussion then shifts towards children suffering from mental health issues, and from there the panelists begin talking about the difficulties parents face in getting even so much as a proper diagnosis and treatment for their mentally ill kids.

Audience member Liza Long is invited to stand up and share the story of her 13-year-old son, who exhibits great mental instability and a proclivity towards violence. Long fears that her son has the potential to be a school shooter one day, but her efforts to seek proper treatment are hindered by doctors who would rather throw more medicine at him and authorities who would rather throw the boy in prison.

As it turns out, Long’s son does not play first-person shooters and its ilk, instead preferring Minecraft and Dungeons & Dragons. His issues clearly do not stem from the media he consumes, yet because current laws and medical policies are reactive rather than proactive, there’s very little Long can do to prevent a potential incident down the road.

Granted, videogames are but a small portion of the entire Town Hall, but when it is touched upon, it’s done with serious class. This may not seem like the most mind-blowing discourse to you — these are the kinds of conclusions game bloggers and other pro-game outlets draw on a regular basis — but considering it’s a public forum held in front of possibly millions of viewers, it’s very refreshing to hear.

So yeah, more of that on TV, please.