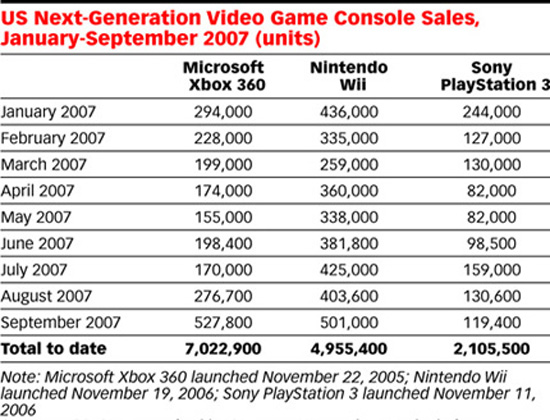 Bah, who needs the NPD anyway? Okay, so the sales data that they’ve recently taken from us will be missed, but that doesn’t mean that they’re the only source for this information.

Next-gen points to data from eMarketer, which shows us the 2007 monthly and total lifetime sales of next generation consoles in the US. Don’t get me wrong, I like my NPD data, but seeing things laid out like this is pretty handy.

If you were to tally up the monthly sales numbers (thanks again NG), you’d see that Nintendo moved 3,439,400 units, followed by 2,222,900 Xbox 360s and 1,172,500 PS3s. It’s clear to see that the Wii is in is own world. The Xbox 360 doesn’t have as much of a lead over the PS3 as some fans would have you believe, even though the yearly total and the lifetime totals are still twice as much as the PS3’s. Perhaps the lifetime totals would be closer if they had launched at the same time.

Hmm, you know what? I still want my NPD data. It feels more official, they’re a nerdy joy to go over, and the trends are easy to track. I guess this eMarketer data is better than nothing.