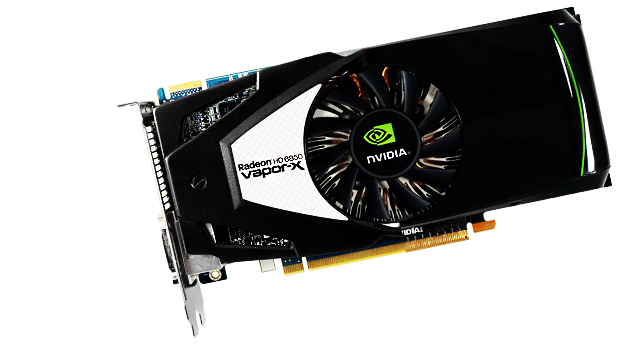 If you have looked into building your own computer, you’ll know that shopping for a video card can be a daunting experience to say the least. With tons of specs to look at, things tend to get a little confusing when comparing different cards, not to mention comparing AMD to NVIDIA.

If you take a look at the differences in specs of AMD and NVIDIA cards, you’ll see a few differences, and it’s not just the price. Today we’ll be talking a little about why these two brands of cards are so different and how AMD can afford the lower prices.

One of the biggest differences between AMD and NVIDIA cards is they way they organize their stream processors. To begin with the basics, a stream processor is just one of hundreds of processing units that work in parallel, and are a major part of modern graphics processors. These stream processors work to continuously render millions of pixels and polygons that create the graphics which appear on your screen.

The big difference between the way NVIDIA and AMD create their GPU architecture is how they implement the stream processors. As you might have seen while looking through GPU specs, NVIDIA cards have significantly fewer amounts of stream processors (SP), where each is identical to the ones near it. Going into more detail, there are eight identical SP and one special unit that more or less oversees the other eight.

For example, if you take a look at the NVIDIA GTX 460, it actually only uses about 88% of the stream processors (every one in nine SP are used as overseers). However, despite this blatant lack of efficiency, it is easier for software developers to create programs for this type of architecture due to its simplicity. Because of this simplicity though, it gives NVIDIA cards the ability to use sheer brute force to power through difficult graphic situations.

AMD takes a slightly more clever way of doing things in that not every SP is the same as the ones around it. AMD organizes the stream processors into blocks of six; four identical processors, one that carries different FP/INT arithmetic functions, and an overseer. While it isn’t as simple as this, you can more or less look at five AMD stream processors as one NVIDIA stream processor. With this more complicated structure comes a potential for increased power over its NVIDIA counterpart due to the extra flexibility this architecture allows.

However, it is easier for developers to create applications for NVIDIA cards due to the simplistic setup, which more or less puts AMD’s ingenuity to waste unless a developer decides to write the application to take full advantage of all the SPs AMD has. The downside to this is that most developers decide not to bother with taking advantage of the extra power AMD (potentially) has, which gives NVIDIA cards a leg up on optimization of their cards.

AMD’s die are significantly smaller than Nvidia’s, which allows for cheaper cards.

With Silicon prices hovering around one to two dollars a pound, that (pretty sizable) difference in die sizes adds up pretty quickly.

The second reason AMD is able to charge less than NVIDIA is because AMD is a part of AMD. This helps because AMD not only receives profits from AMD products, but it also gets the same deals and technological advances AMD gets. It’s just a matter of having some variety in the mix.

There is, of course, the more obvious reason NVIDIA cards are more expensive than AMD’s cards: brand name. It’s the basic idea that NVIDIA prices their cards so high because they can get away with it. Although AMD sells at a lower price to be competitive with rival NVIDIA cards, AMD likely still turns a pretty hefty profit off their cards; just think how much NVIDIA is making off it all.

While NVIDIA graphics cards may have a little more power to them, AMD graphics cards will (most likely) always be a half step behind them for a fraction of the price. Also keep in mind that because AMD are serious competition for NVIDIA, they have been a major factor in driving NVIDIA prices down. So overall, NVIDIA will carry the title in performance for a higher price tag over AMD.

Going into slightly more detail, both brands have their pros and cons, and the one that is best for you is generally going to vary depending on what you intend to use the computer for and what your budget looks like. Typically, if you are going for a performance or gaming rig with a budget of around $700 or more, I would suggest getting an NVIDIA card.

Anything below that and I would look into the cheaper alternative, AMD. However, all cases vary from card to card so take the time to look at both brands in that price range and decide if you’d like a slightly lower price or slightly higher performance.

EDIT: Swapped ATI for AMD. I apologize, it was a careless mistake on my part.