Put it all on black

A little over a decade ago, Midway – a company spiraling towards bankruptcy – dropped a trailer for what could have been, should have been its saving grace. This Is Vegas would be an open-world title set in Sin City where gaming’s most generic-ass looking mother fucker could do all the things fans of open-world games love to do: fight, gamble, race, and dance like nobody is watching. I think about the game whenever I am in Las Vegas which is where I am as of the time of publication.

I’m not big on gambling and I fucking hate cigarette smoke, but I love me some casinos. Maybe it’s my ADHD or my simple mind that is easily overcome with joy whenever I see bright, flashing lights and hear the buzzes and whirls of the slot machines, but there’s something pleasing about making my way through the sea of hover rounds and cocktail girls as I wander a sea of penny slots. This Is Vegas would probably have been the most authentic recreation of the Vegas casino floor, but thanks to Midway going kaput and Warner Bros. killing the rumored $50 million project, we’ll never know. Instead, we have to settle for the other casinos video games have brought us, and as I thought of this week’s Destructoid Discusses question, I realized there are some pretty amazing takes on the setting in gaming.

From those old school Casino Kid and Vegas Stakes games that were just straight-up gambling simulators to Capital Cashino in 2017’s Yooka-Laylee, this medium has a long history with readying us for a life of lost wages. And in going through every example I could find, the one video game I keep going back to is Elite Beat Agents.

It’s a crime the West never got a sequel to this game. Only a few pieces of media have made me legitimately cry: the Doctor Who episode “The Girl Who Waited,” the end of A.I. because I’m a pussy, and the “You’re the Inspiration” sequence in Elite Beat Agents. But that’s a topic for another time. For this piece, I want to focus on the “Rock This Town” sequence. Set to the Stray Cats classic — but covered by Mark Latham — this stage features a Vegas magician facing off against the Fullhouse Bandits after they take over the casino. How rude!

What follows is an absurd three and a half minutes of cheerleaders rooting on the magician as he uses his tricks to confound the bandits and save the casino. He throws his cards like Gambit, uses his wand to transform their weapons into pathetic flowers, and unleashes a steady stream of doves right out of his cape. What I love about it compared to other games that include the casino aesthetic is it doesn’t resign itself to focusing on the most obvious aspects of the setting. There are tons of games that have casino features with slot machines, but how many focus on those bad magician shows? It’s a different side of Vegas, one that’s ridiculous, hilarious, and more family-friendly than seeing people with obvious addictions losing their life savings before tricking themselves out on the streets to make ends meet.

Like I said above, it’s a crime we never got a sequel to Elite Beat Agents because I’d love to see a follow-up where the magician is a highflying act in Vegas, performing some David Copperfield nonsense as the cheerleaders hypnotize the audience into thinking he’s actually flying. 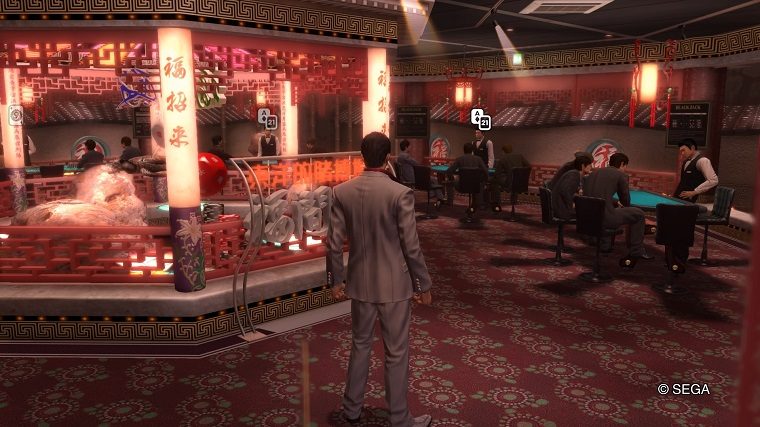 I’m not sure why anyone would think I’d put something different, but the various gambling halls found in Kamuorocho from the Yakuza series are some of my favorite. Not only are they home to familiar games (Blackjack, Poker), but they also house a ton of Japanese specific games (Koi-Koi, Cho-Han, Cee-Lo) and have taught me quite a bit about Asian gambling.

When a casino in my state opened an Asian parlor, I actually knew what was going on behind all those crazy lights! That I gained all of that real-world knowledge from Yakuza makes it extra special, to me.

I lost my Dojo, but the Dojo remains in my mind.

It even has a casino.

Dojo, casino, it’s all in the mind.

You have nothing to lose. 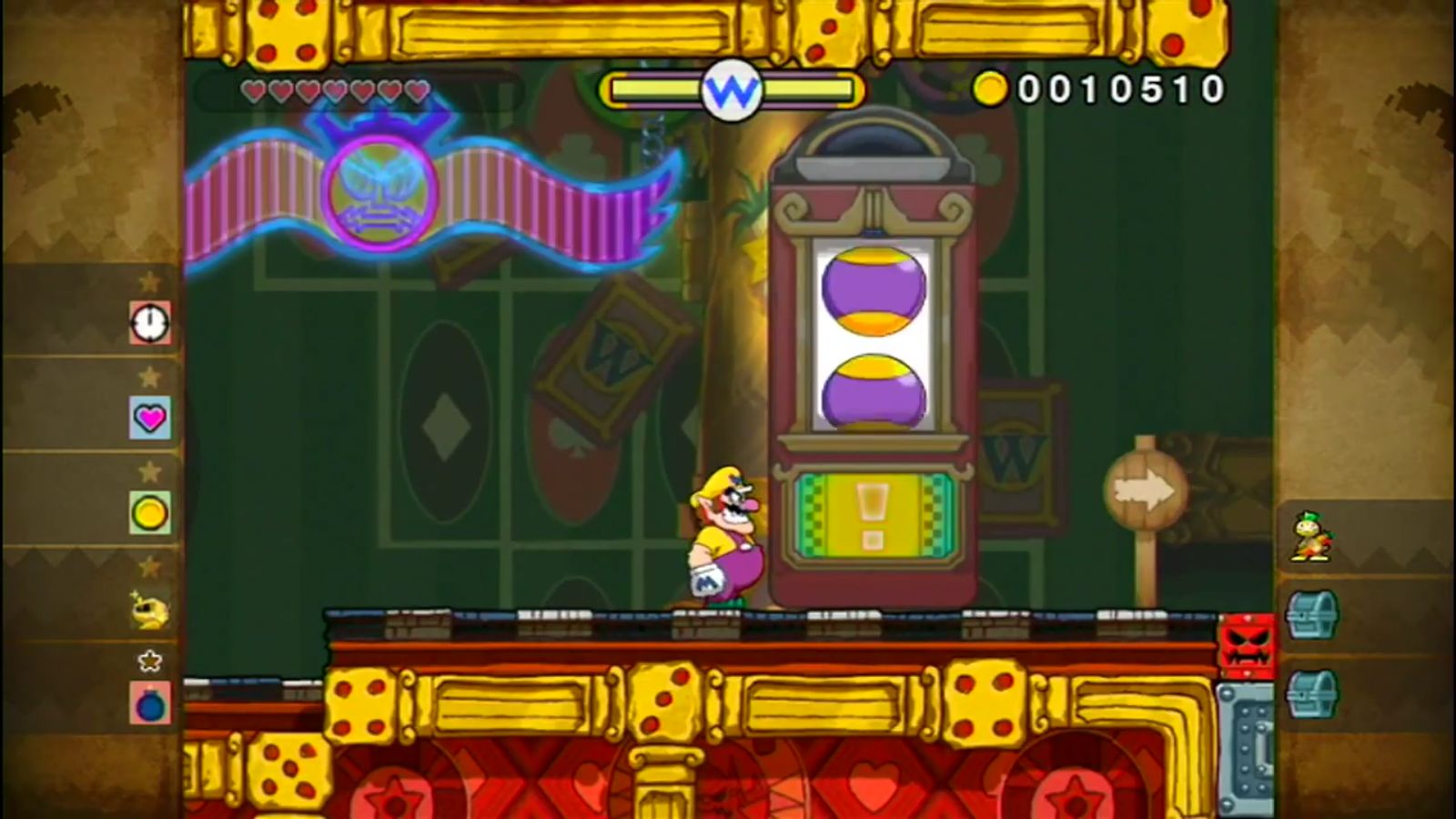 In my entire life, I’ve been inside a casino approximately… zero times. The closest I’ve ever come was in an arcade that had a wing of slot machines and other gambling games. The clerk wouldn’t let me in, so I had to look over the fence while my dad went inside to show me how coin pushers work.

Nevertheless, there is something about casino levels in videogames that is difficult to resist. The visuals, the music, it all comes together to create an atmosphere of fun.

If there’s one game out there that combines all of those things with a bit of its own special sauce, it’s the criminally underrated Wario Land: Shake It!. Its casino levels Glittertown and Neon City are some of the best in a game that doesn’t have any bad levels. As soon as you take your first steps and the music kicks in, you already know what you’re in for.

One interesting thing about these levels is that they are the only two in the entire game that don’t have enough coins in them to fulfill the optional “Collect X coins” mission. Instead, they require you to find a hidden slot machine and score a jackpot a few times in order to meet your quota. Fortunately, Wario Land: Shake It!‘s slot machines are all completely timing-based, so once you get good at it you can hit that juicy coin bonus every single time.

And let’s be real here, what’s better than a slot machine that always pays out? 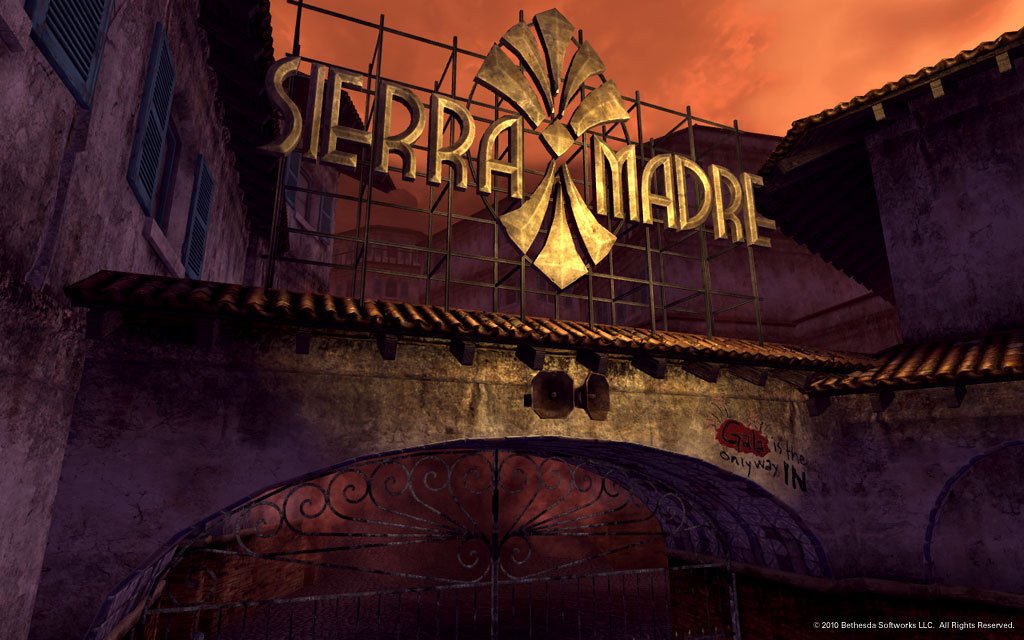 I’ve never been a big gambler. As a New Yorker, I did the obligatory trip to Atlantic City when I turned 21, but beyond that, I’ve never really had the urge to return.

If I could head to any video game casino I’d make my way to Fallout New Vegas’ Sierra Madre Casino. The Madre has everything. Slot Machines, bipolar Supermutants, even weird ghost people with spears. The big loot is stored in the casino’s vault. As with any good wartime casino, it’s loaded to the brim with guns and armor.

Sure, I would stand a good shot of dying at the Sierra Madre, but I might as well get a few hands of blackjack in before the mutants take me out. 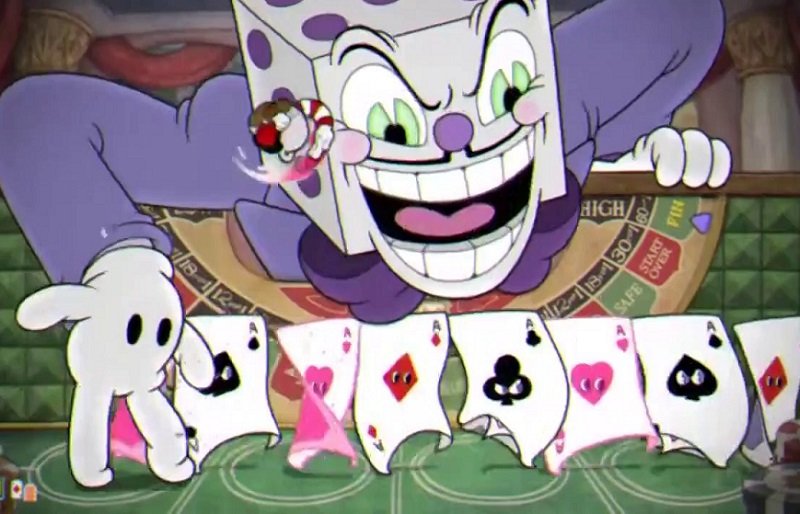 Hmm… I’m not entirely sure if I’d like to visit Mr. King Dice’s Casino from Studio MDHR’s excellent platformer Cuphead, but it’s probably my favourite money-sink in gaming. I love the gorgeous backdrop of its pitiless customers, every one a Roaring Twenties skeleton, as well as its amazing string of unique boss fights, all based on various games designed to trick you out of your hard-earned bucks.

Not only must this selection of games be overcome, including death-march playing cards, a ballerina roulette wheel and an angry set of dominoes, but even the vices of the smoky establishment itself are out to get you, in the form of killer cocktails, air-choking cigars butts, and Stetson-wearing chips. This array of sub-bosses are a gauntlet of gambling that must be run in a single life-bar, with the player’s fate decided by the roll of a die.

And presiding over it all is smiling scumbag King Dice himself, literally in cahoots with the underworld and more than willing to let his hapless patrons wage away their money, lives, even their very souls. The King Dice palace may be a memorable, stylish and inventive gambling den, but like my mama told me a long time ago, you don’t deal with The Devil. 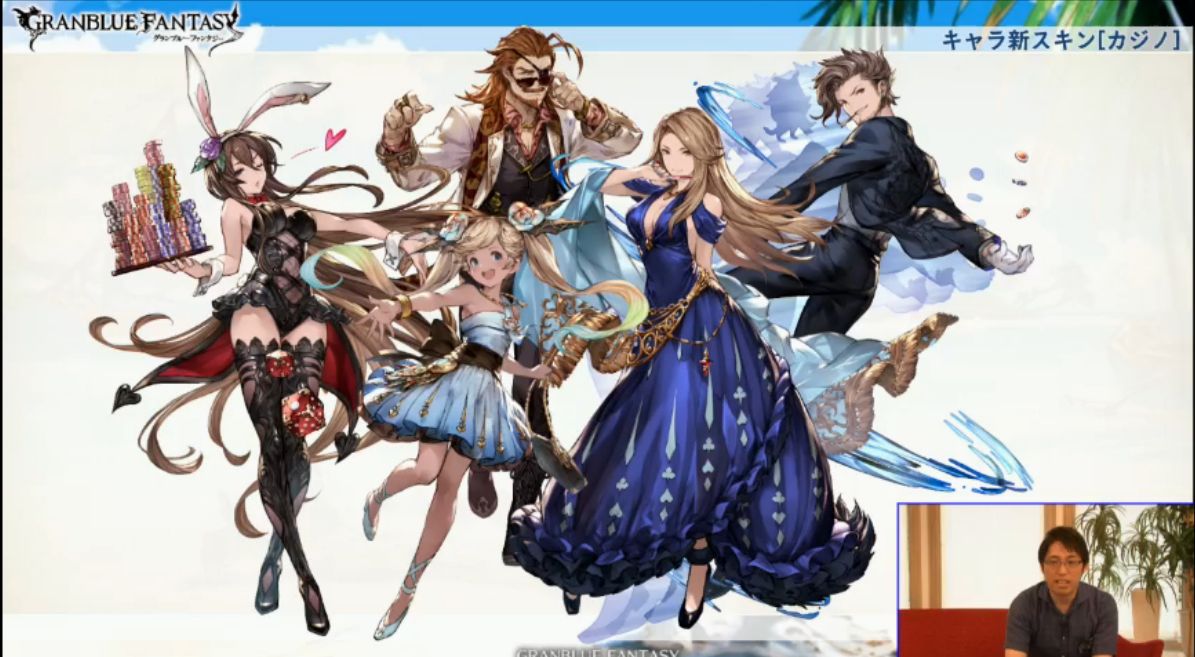 If we’re talking about casinos as environments, the places where gambling happens, I have little to do with them in real life. I once visited one in Illinois with my aunt. I spent about 10 minutes at the slots, came out $20 ahead, and then cashed out and spent the rest of my time in the lounge with the free food.

That said, I’ve spent quite a bit of time and money on game casinos, particularly what one Twitter user called “wife casinos”. Naturally, I am referring to mobile gacha games like Fate/Grand Order and Granblue Fantasy. Of these, Granblue has its own actual in-game casino, the Jewel Resort Casino airship. Despite being little more than a glorified menu screen for a couple of simplistic minigames, it’s still dreadfully important to many Granblue players, as farming literally millions of casino chips from “the chip mines” (a nickname for its poker minigame) enables one to buy up large amounts of useful items. Wind-element players in particular will spend a lot of time there, as many of the game’s most coveted early-game wind summons are tucked away in the casino store.

The existence of the Jewel Resort also gives Granblue Fantasy‘s art team an excuse to offer skins of various characters dolled up in their evening wear. That’s about the only good thing about the Jewel Resort, all things considered. 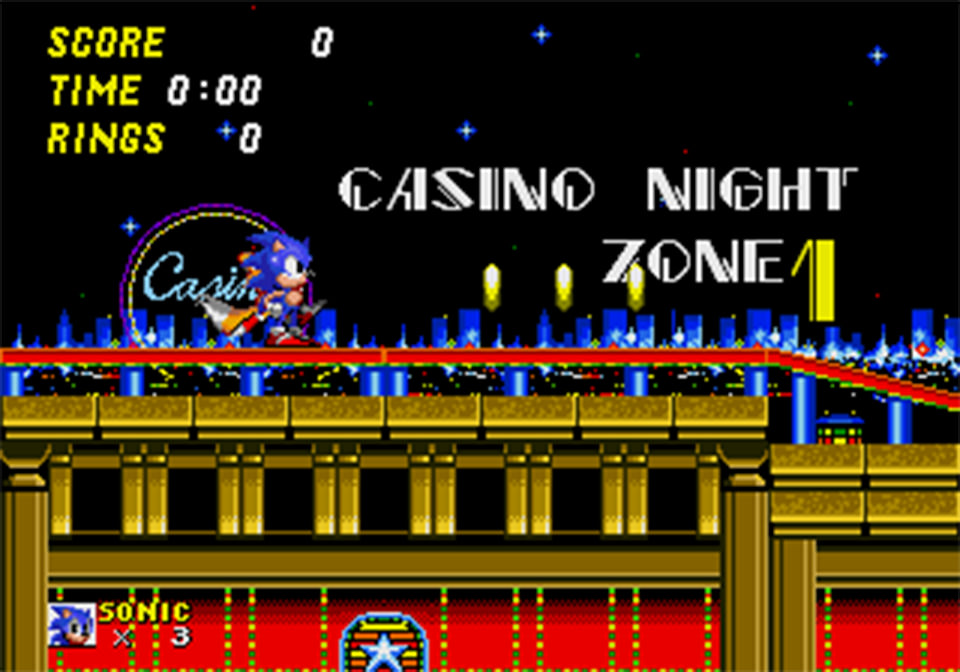 I’ve only been to a casino once in my life. My aunt dragged me and my dad along to go watch an Elvis impersonator. As you would expect, it was terrible. Thank god the place had a fully stocked bar. That said, despite probably not the best first impression within an actual casino, I’ve always enjoyed the casino level aesthetic in a lot of games. But, if I had to narrow it down to my favorite, it would have to be Casino Night Zone in Sonic the Hedgehog 2.

The Sonic franchise has had a host of casino-themed stages to choose from, but, Casino Night Zone is absolutely the best of the bunch. It features everything you could want in a good Sonic level. Everything from that gorgeous backdrop and iconic tune, to hitting all the various bumpers and slot mini-games. It’s also one of the few levels in the game where it’s generally a smarter idea to take things slow, due to said bumpers that send you flying in all directions and so you can keep building that ring count in the various slot mini-games to earn tons of extra lives.

Which you’d absolutely need for the hellscape that is Metropolis Zone. 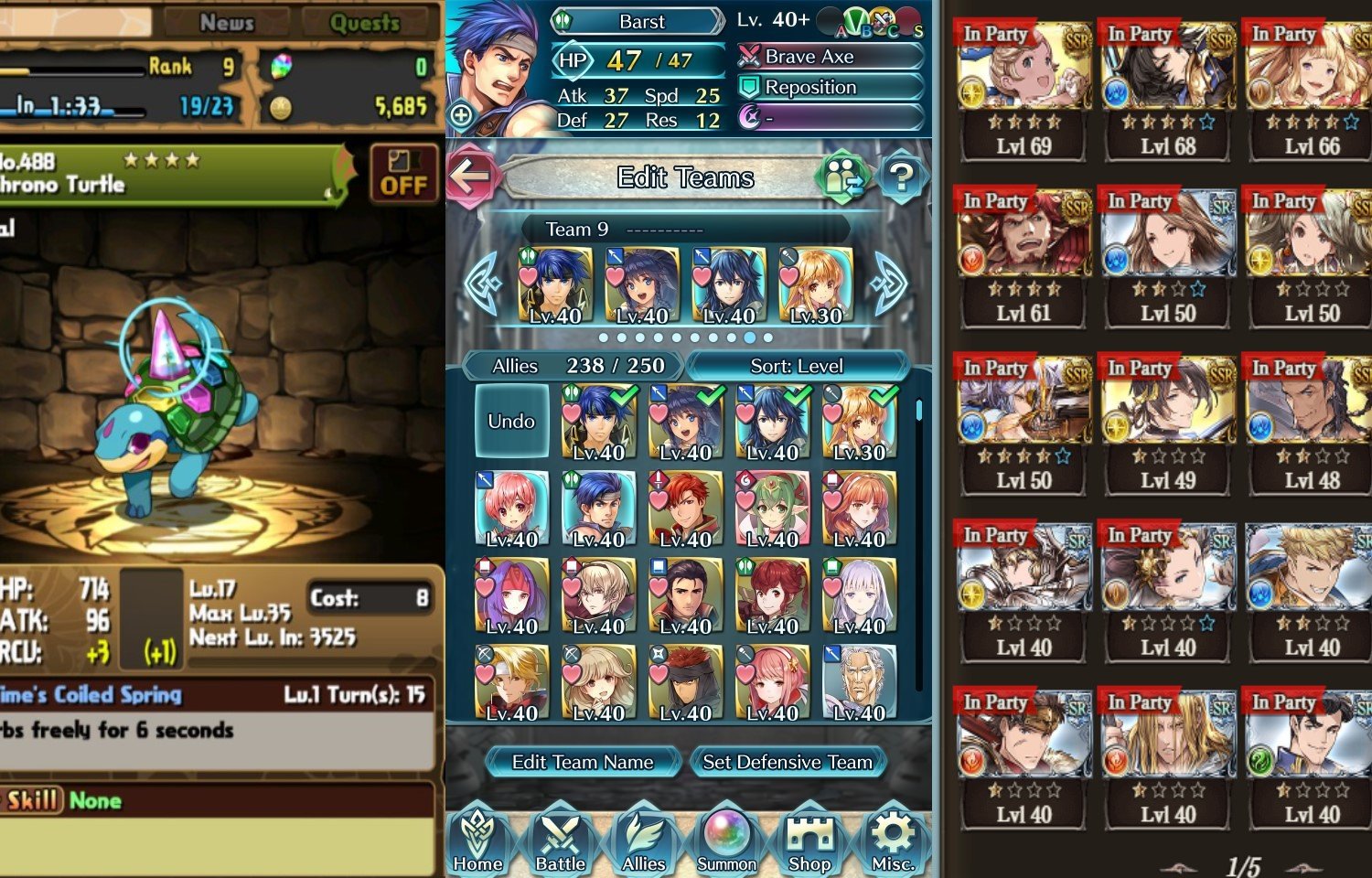 I’ve said before that I have a complicated relationship with gacha games, and that holds true to this day. I’m aware of their casino-esque schemes to get players to pay loads of cash to get a chance at that jackpot they truly want, and I advise against playing them as such. But whenever I distance myself from that hook and commit to a budget of “nothing, except for 20 bucks if I really, REALLY like the game”, they’re my favorite little mobile time-waster. I like the unpredictability of not knowing exactly which party members I’ll build my teams with, even if it’s not the best team or if I don’t get the characters I want the most. Kinda like the appeal of a Nuzlocke run, except with less permadeath.

Just… please, don’t drop hundreds of dollars for a jpeg of your waifu. Google can find it for free.