Both are awful in their not-so-unique way

The lead-up to the launch of Futurama: Worlds of Tomorrow has been entertaining. Since the show’s second cancellation, I’ve been trying to get any heaping helping of Fry, Bender, and Leela available. Last year that meant suffering through A Game of Drones, a serviceable match-3 puzzle game that lacked the defining characteristics of the show. I made my way through roughly 70 levels of that game before growing bored of it and moving on.

Worlds of Tomorrow, out now on iOS and Android, is actually a worse app than A Game of Drones could ever be. It’s a city builder, ala The Simpsons Tapped Out, Family Guy: The Quest for Stuff, Peanuts: Snoopy’s Town Tale, some fucking Garfield game and literally 100 other apps; all free-to-play, all built around the premise people will pay if they don’t have to wait. That’s what city builders are: waiting games. Right now in Worlds of Tomorrow, I’m waiting for Fry to finish doing the robot while also waiting for the Professor to stop admiring various lengths of wire, Amy to stop embracing her robosexuality, and Bender to stop shoplifting for fun. I need them to finish up so I can assign new tasks, or even the same ones once more, as I slowly gain enough money, pizza slices, and Hypnotons to continue.

If this were any other title, any other IP, I would have deleted it long ago. I don’t think I’d even give Animal Crossing this time of day if it ends up being a city builder app. But Worlds of Tomorrow will stay on my phone because of that Futurama charm. I said the lead-up to the game was entertaining. The short commercials featuring original animation were wonderful. I argued these trailers would be better than the game. Spoiler Alert: I was right. The opening animation for the app, featuring two Hypnotoads locking eyes and ripping the universe apart, is genuinely funny and as far as I can tell, completely inaccessible after I’ve watched it that first time. 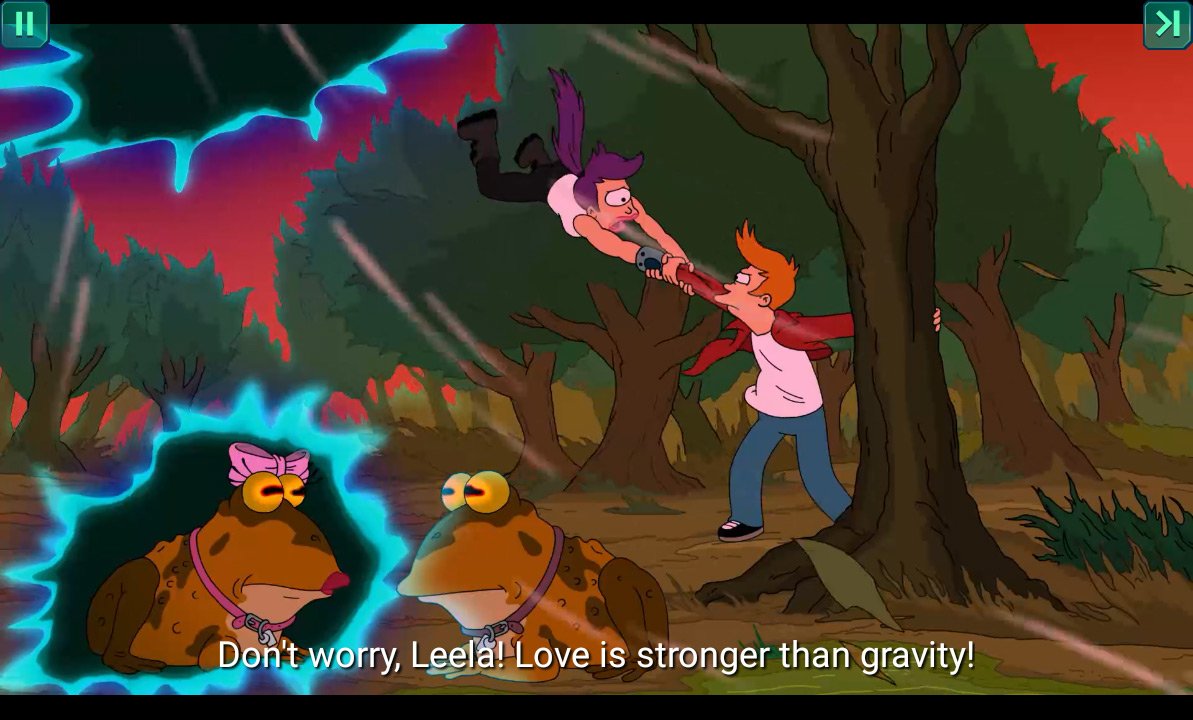 As Jules Winnfield once said, “Personality goes a long way.” Futurama: Worlds of Tomorrow is a filthy animal of a game, one that uses cheap soundbites from the series to woo me into its Freemium fingers, nudging me ever closer to the point where I might actually spend cash to build a robot strip club. It should not be on my phone, but the nostalgic memories of a series I hold dear to my heart keep from sending it to the trash can. Personality goes a long way, and without it, Worlds of Tomorrow might be as staid as Final Fantasy XV: A New Empire.

A New Empire launched at roughly the same time as the new Futurama app. From Epic War LLC, a subsidiary of Machine Zone, it is Mobile Strike but with Final Fantasy characters. Now I have not played Final Fantasy XV, so I cannot attest to how well this app carries over the atmosphere of the Square Enix game. What I can say is it has all the magnetism of a hospital ward.

I never played Mobile Strike or Game of War and I had Clash of Clans on my phone for all of 20 minutes. They never looked like actual games to me and it didn’t help the ads for the apps are fucking terrible. But in the spirit of covering more mobile titles for Destructoid, I stuck it out with A New Empire and found it is nothing more than a needy-ass Tamagotchi. I close the app and it alerts me when it needs to be fed or when I need to do a quest or upgrade a building. That’s it. I’m simply opening it up and picking whatever task it recommends I do, completing as many as I can before I run out of materials, closing the app, and waiting for it to come crying to me again.

My youth is littered with dead Tamagotchis, either from starvation or buried alive under their own shit. I ain’t got the time or patience for that. A New Empire should be just as dead to me, but as I play I realize it’s even less of a commitment than that stupid Japanese pet. I had to engage with a Tamagotchi and this is just the opposite. It’s an unengaging activity, one I simply need only bother looking at my phone for a moment to participate in. I’m not having fun with it, not by a long shot, but it’s hooked me on a “gameplay” loop of upgrading and waiting. I send my troops out to battle and wait. I upgrade my farm and I wait. I scout an enemy territory and I wait. Every time I open this app, close the ad that always appears when I do so, and stare at the leather-clad protagonists of Final Fantasy XV, looking like the twinkiest Colt models alive on the loading screen, I prepare to wait.

A New Empire has more waiting than Worlds of Tomorrow and that’s actually a good thing. There is simply more to do in it and while progress in Futurama is as slow as the day is long, I’m advancing through A New Empire at a comparatively brisk pace. With guild quests, hero quests, locations to ransack, opponents to scout, research to conduct, and an empire to build, the app keeps me coming back every 10 minutes or so. In the process of writing this article, I opened it roughly eight times. I didn’t open Worlds of Tomorrow once. 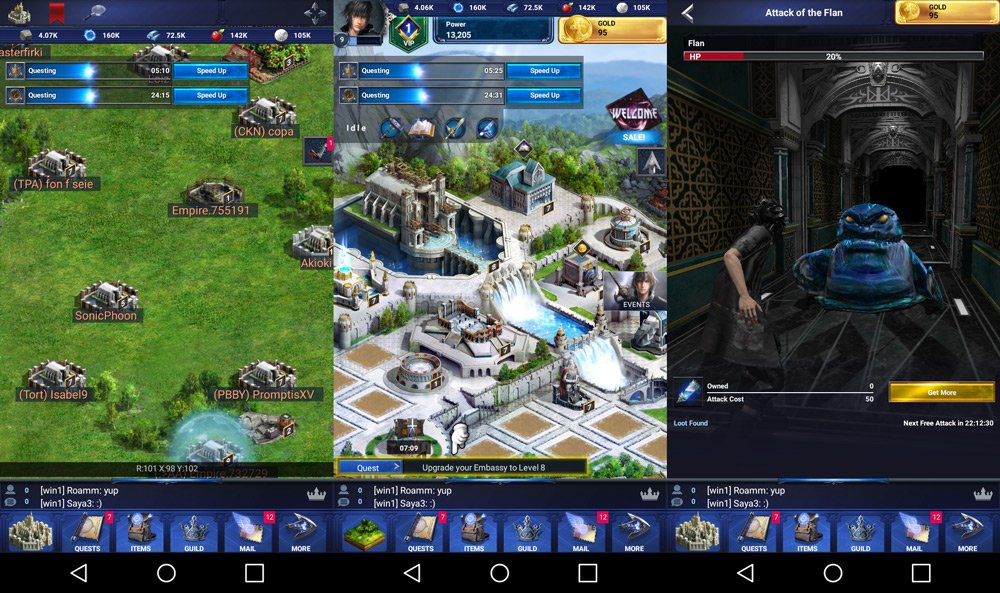 Despite the differences in appearance, both of these games are very much the same. Like most of the mobile marketplace, they don’t test your skills but rather your patience. They’re the boyfriend or girlfriend we know we should dump, yet we keep around to see just how much bullshit we’ll put up with. Because they’re free, we’ll give them a go. Even in cases where we know we probably won’t enjoy them, we give them a shot because there’s no real loss if they suck.

These are the exact types of experiences older gamers use to dismiss the mobile marketplace, and after spending the last six months diving into these apps trying to find the worthwhile games I could recommend, I don’t blame them. I don’t blame people who refuse to give mobile a shot. It’s a real dumpster fire of clones, rehashes, and stolen ideas all produced from the few original ideas that debuted years ago. When you’re not battling questionable control schemes, you’re trying not to accidentally click on one of the several dozen ads that pop up. There is little innovation outside of the many different new and exciting ways these free-to-play games try to restrict your progress.

I don’t like either of these games, but I don’t think I’m supposed to. While Worlds of Tomorrow is aimed at Futurama fans like me, I know A New Empire isn’t intended for this writer or probably any of you reading this article. If you don’t like mobile games it’s not the one to change your mind. No, A New Empire is for China, which holds 25% of the gaming market. It’s for Japan, a country that spends roughly $10 per capita each month on free-to-play games. It’s for the younger generation of American and European gamers, those growing up in a world where games are supposed to be free and you only pay when you want to.

If I had to speak objectively, A New Empire is the superior app. It has done a much better job of keeping me pressing those buttons throughout the day. Worlds of Tomorrow is more set-it-and-forget-it. I can see now how these types of games make hundreds of millions of dollars every year from dumb, impatient people who don’t mind spending their way to fruitless success.

But it’s also a game I have no connection to. I have played it for roughly 10 hours and if I were to delete Final Fantasy XV: A New Empire from my phone right now, I wouldn’t give it a second thought. It simply lacks that Final Fantasy personality that has drawn me to the series over the past two decades, and personality goes a long way.