Mortal Kombat X‘s review embargo is up, but we’re not quite ready to pull the trigger just yet. Many aspects of the game aren’t fully operational including some online modes, and select facets of the Faction War feature (all hail Lin Kuei). We’ve also had very limited access to the Living Tower mode, which hosts special online events on a timed basis, and we don’t have Goro yet.

Despite that, I have some initial thoughts on the game, and they’re definitely positive. 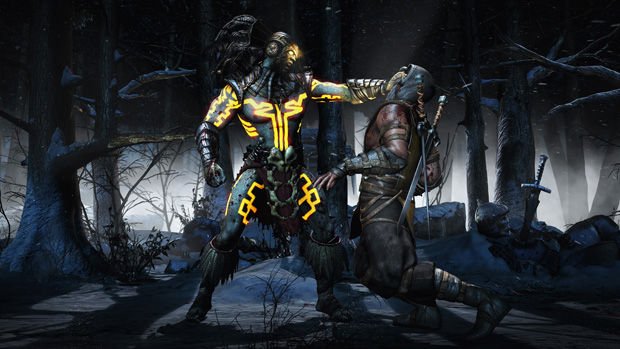 The most impressive part of Mortal Kombat X so far has to be the engine. It’s incredibly sleek and will hold up for years to come, which will come in handy since people will be playing it for quite a while. I went back to the 2011 reboot and it’s already dated both in terms of the general visual style and the actual animations, but there’s a lot more attention to detail with X. This new improvements also castsFatalities in an all-new light with even more grotesque goodness — with this generation, Fatalities have officially shifted over to a less cartoony state.

Mechanically, it’s roughly the same as 2011, which in my mind is a great thing as it would be silly to break what works. Four buttons grant you access to two kicks and two punches, with a block button added in for good measure. Any command moves are relatively easy to pull off (especially with the optional assist function that eliminates diagonal requirements), and the general mechanics aren’t difficult to pick up. When learning new characters, I really like the ability to pause and have the command list instantly pop-up in an easy-to-read format, or even better, tag moves on-screen.

In terms of the roster (which weighs in at 29 characters, five of which are DLC if you include the Goro pre-order bonus), there’s a good mix of rushdown and zoning characters, as well as everything in between. I really like the variety of the cast despite the fact that some of my favorites aren’t playable anymore, but a few of the newcomers bring something interesting to the table. A standout for me is Kotal Kahn, who is described as a master of Blood Magik in the lore. He accentuates his title perfectly in-game, with constant blood sacrifices between rounds and a moveset that reflect his power (with two variant styles in tow).

I need to run through the story mode again but my initial assessment is that it’s not quite as good as the reboot. It’s a tough act to follow since rebooting the universe allowed the developers an unlimited amount of freedom, and now there has to be some sort of continuity. The other modes are fun so far though, including the Tower challenges and the new Krypt feature.

While I don’t think Mortal Kombat X will have that same sweeping “wow factor” as its predecessor, it’s undoubtedly a worthy follow-up and I can easily recommend it to anyone who enjoyed the last game. Expect a full assessment in the near future of the PS4 version once the game is out, as well as a PC Port Report once we have a copy.

The time has finally come. You can stop watching the near-daily trailers and actually play the game tomorrow.