It was one of two games not to win an award at the competition but, given the fact that it’s only been in development for two months, its selection as one of six finalists is impressive nevertheless.

It is a side-scrolling platformer with a subdued art style, aboslutely no violence, and very few power-ups.

I played six games at this year’s Dream.Build.Play competition, but there was only one that prompted me to show it to my girlfriend. That game was Morsel‘s Kaleidoscope.

Like Dust: An Elysian Tail, Kaleidoscope‘s initial appeal is its visual style. However, where Dust is bright and flashy, Kaleidoscope is subdued and elegant, and I think that its aesthetic ties into the rest of the game. Kaleidoscope is never over-the-top or extreme, but it is a solid and charming puzzle-platformer geared more toward making gamers happy instead of frustrated or even excited.

Kaleidoscope‘s story is equally tame: you control Tint, one of the few inhabitants left on the planet of Kaleidoscope after a desaturation outbreak drives them all away. Tint isn’t a superhero or a prophesied messiah: he’s just a little guy who likes his home and his grandparents and wants to help in any way possible.

To offset the desaturation plague, Tint simply has to platform his away across several nicely-designed levels, collecting little blobs of color and bopping enemies (who become immediately friendly) on the head. Kaleidoscope joins games like de Blob and The Saboteur that have made bringing color back to a black-and-white world their central narrative conceit. However, in Kaleidoscope, tight platforming takes the stage, and re-coloring the world never feels obtrusive or gimmicky — it’s more like a reward for completing the game’s various physics-based puzzles. 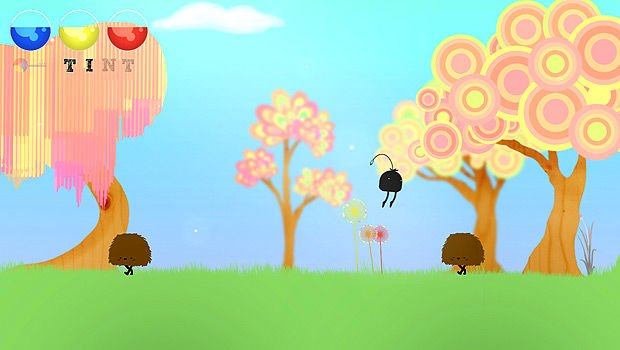 Kaleidoscope suffers from a few problems with collision detection, but, by and large, the game’s platforming is intuitive and fun. There are puzzles scattered throughout designed to help you advance safely that can be, at times, more difficult than the charming art style suggests. In fact, I didn’t manage to beat the first level of the game until I came back to the Dream.Build.Play booth the second time, girlfriend in tow.

In order to solve these puzzles, Tint will have to collect little blobs of color, each tied to a certain power-up. Yellow blobs of paint let Tint float, red blobs give him a shield, and blue blobs allow him to sprint, useful for clearing jumps, outrunning enemies, and pushing apples or leaves around. Of course, these powers are limited, so it’s always in Tint’s best interest to explore every piece of the level in order to collect as much paint as possible.

While designer and creator Matthew Stenback is a business student at Memorial University of Newfoundland, it’s clear that he’s also got a firm grasp on pacing and difficulty when it comes to 2D platformers. Stenbeck says that he wanted a “lighthearted feel” and that he wanted “to make a game that … didn’t rely on violence to drive a satisfying experience.” Instead, Kaleidoscope derives player satisfaction from an almost perfect mix of difficulty and accessibility, tied together with simple, elegant, and charming design. Even when Tint dies (exploding with a little “pop”), Kaleidoscope is never interrupted, thanks to a generous, invisible checkpoint system. 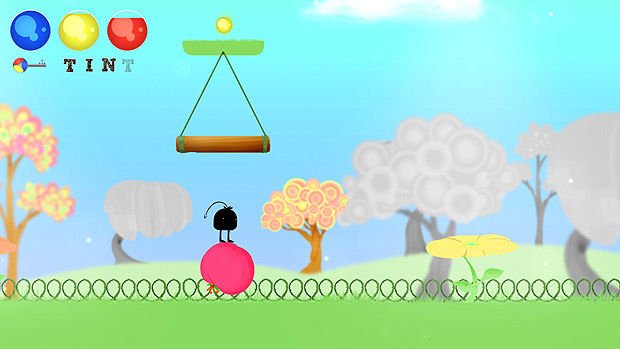 Kaleidoscope may not be wildly inventive, or even very flashy or eye-catching, but it is a finely tuned and enjoyable experience that prefers subtlety over violence and smart level design over bump-mapping and bloom lighting. Even though Stenback and his team left Dream.Build.Play empty-handed, I can comfortably say that it was my favorite game of the competition. No platform has been announced for Kaleidoscope yet, but whether it comes to Xbox Live Arcade or the Indie Games channel, Morsel has a claim to my attention and my Microsoft Points.