There are no wrong answers

The PlayStation 4 version of Shadow of the Colossus will release tomorrow, and we’ve already told you it’s a fantastic remake of an incredible game. For some people, it will represent their third opportunity to happily play through this all-time classic. For others (like me for example), it’s their first chance to see what all the fuss is about.

This article is not for that latter group. We’re going to revisit our personal favorite colossi. If you’ve never played this game, do yourself a favor and close this tab. Come back after you’ve experienced them all first-hand.

There are 16 colossi in Shadow of the Colossus and they’re all capable of burning special memories into the minds of everyone who encounters them. For creatures that are all lumped under the nondescript banner of “colossus,” there’s a staggering degree of variance. Big and small; water, sea, and land; aggressive and docile — no two of these are alike and that’s why there’s no clear best colossus. 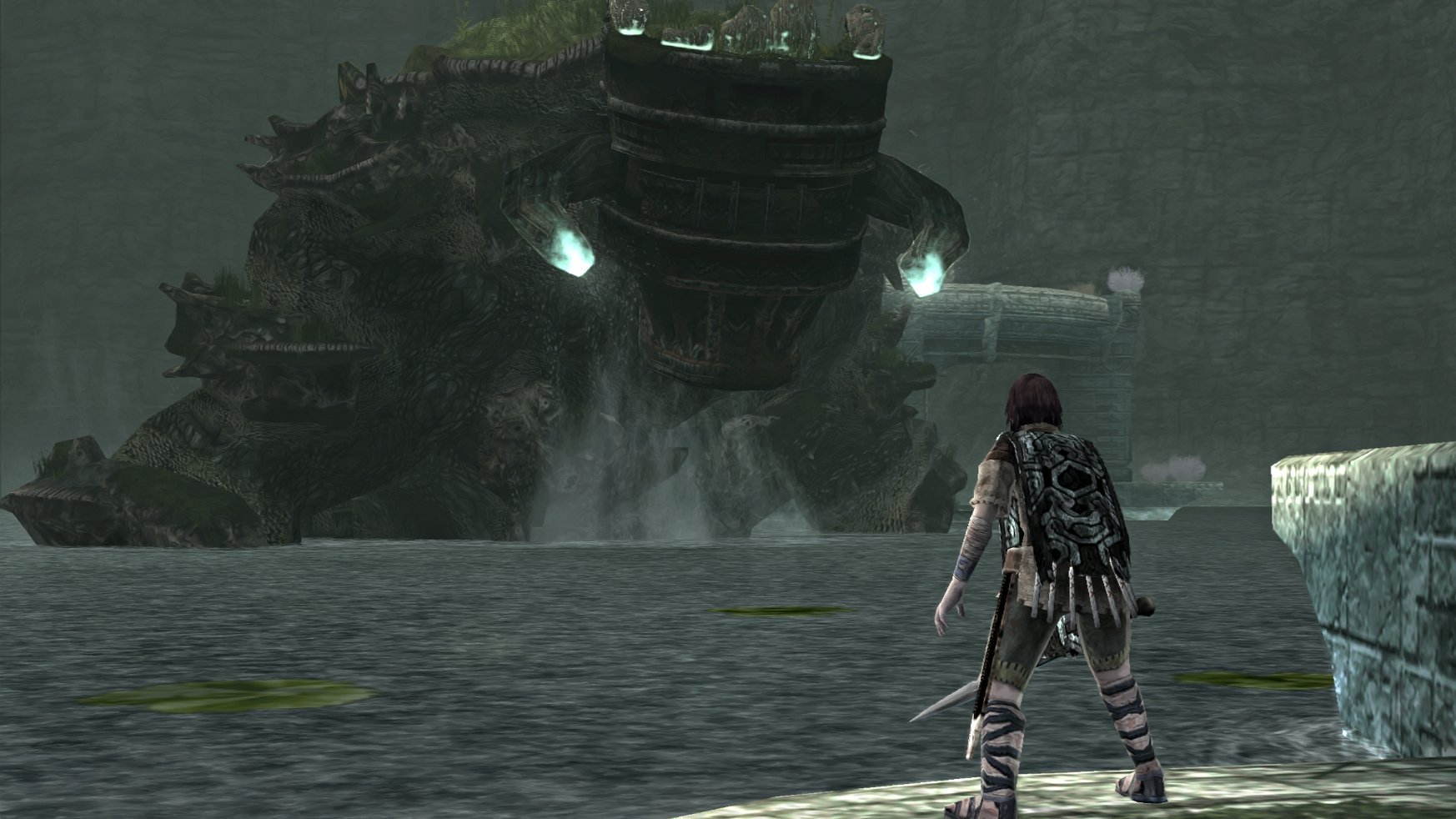 One of these monstrosities bothered me more than the other 15, and that’s why it stuck as my favorite. It’s the 12th colossus, dubbed “Pelagia” by fans. Pelagia is a lake creature that doesn’t seem to have any traits that are definitively animal or human by conventional standards.

Unlike literally every other colossus, Pelagia doesn’t have eyes. Eyes are surprisingly striking in Shadow of the Colossus. They feel like a window to the soul. Eyes are the single feature that most makes every colossus feel like a living entity.

Pelagia’s oddities don’t stop at its eyes. Its head is more half-colusseum than skull. Teeth grow out the top of its head. Its back feels like it’s covered in moss rather than fur. Whatever this is, its closest analog is probably one of those hellish prehistoric abominations that live a million miles under the sea. For the first time, I felt no remorse as I plunged my sword deep into this thing’s chest cavity. 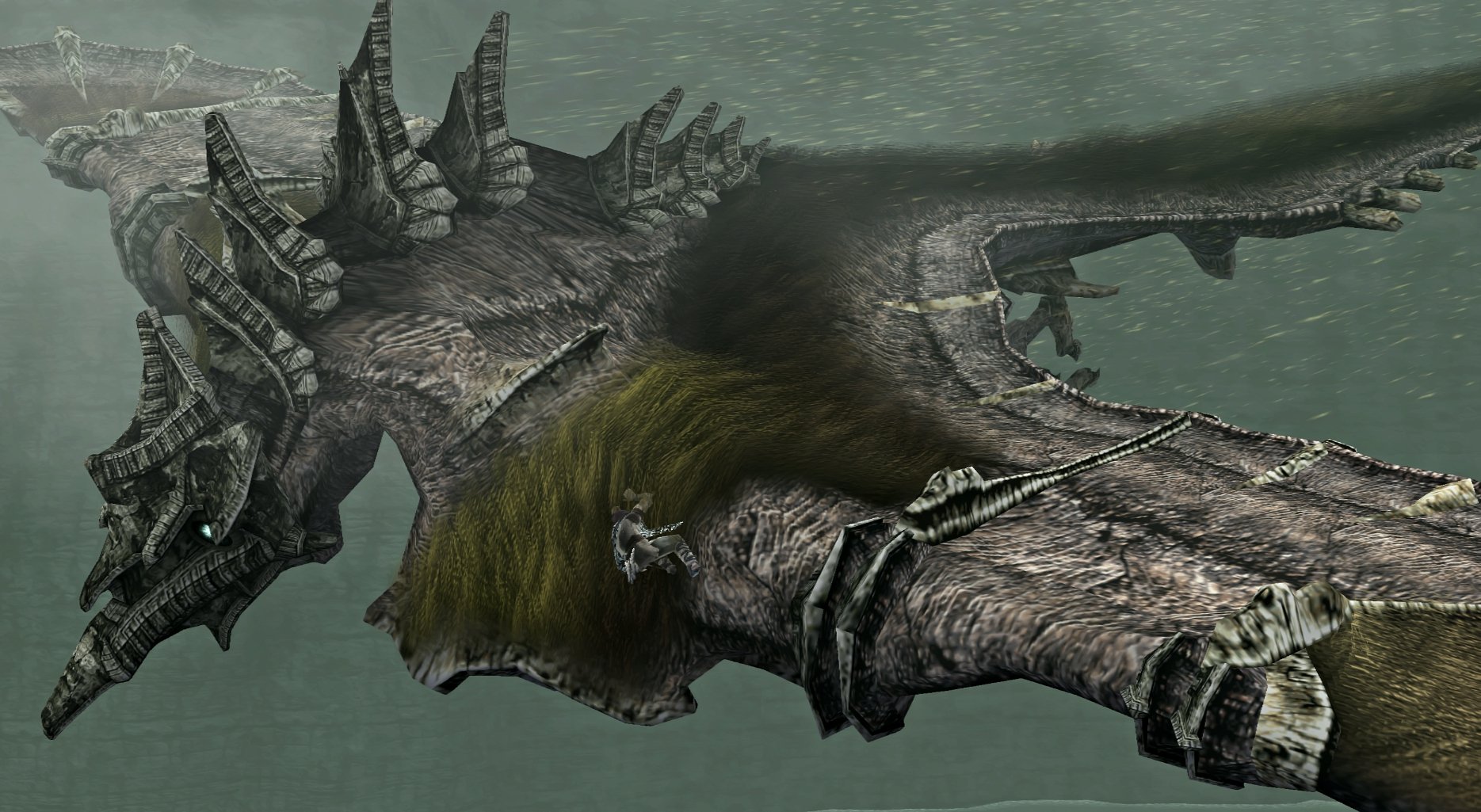 For a boss rush experience with minimal downtime, Shadow of the Colossus has an incredible way of ramping up its difficulty ever so slightly so it doesn’t become overwhelming. But by that same token, it can also completely subvert your expectations.

It stands to reason that they’d want to save a flying colossus for one of the last encounters, but nope! Avion, aka Avis praeda, enters the fray fairly early. While the “grab” mechanic is typically stressful, the idea of floating up in the air moves it to panic levels. It’s not a difficult fight (especially if you stick the landing on its fur right away), but it’s one that’s become burned into my brain for all eternity.

Very few games have captured the feeling of fighting an aerial foe without it feeling hokey and scripted in some way. 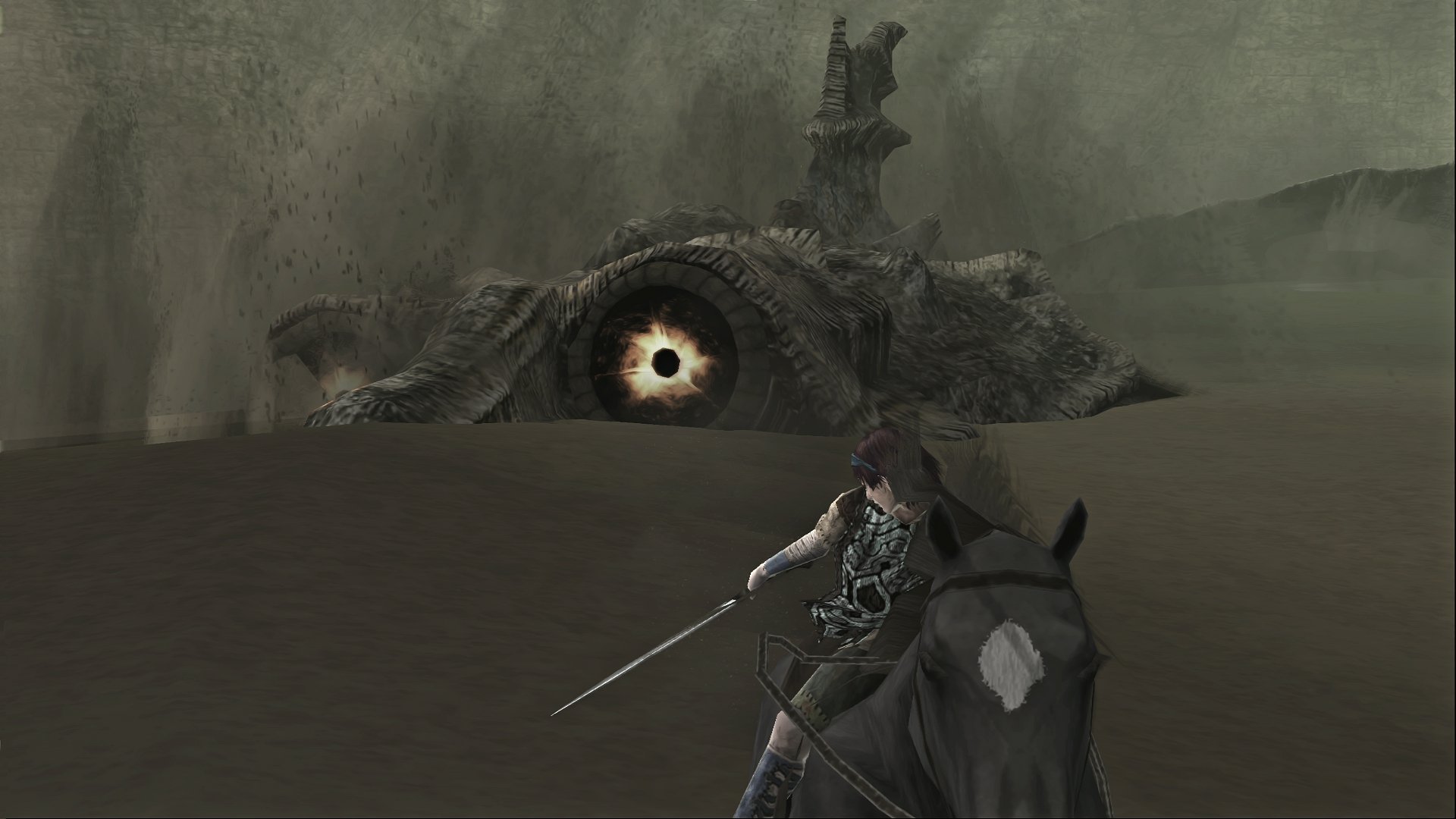 While pretty much every boss in Shadow of the Colossus is great and feels important, my favorite would have to be the 10th colossus, “Dirge.” At this point in the game, you’re starting to understand the implications of Wander’s journey and begin to question your own morality in hunting down these creatures. So what does Dirge do? He gets pissed and hunts your ass.

This is the first Colossus to actually attack Wander without being provoked. He slithers around under the sand and pops out in an attempt to swallow Wander whole. It is frightening and a real change of pace from the previous nine, relatively docile beasts.

This is also the battle that requires Agro the most. While Agro comes in handy for a couple of the battles throughout Wander’s adventure, Dirge would be impossible without her. I also love how you need to get Agro into a gallop and then spin yourself around and snipe Dirge, which is something you haven’t done before this battle.

Even if some of the other colossi provide a bigger spectacle, Dirge is my favorite simply for being so unique. He also gets his own specific theme song, and that is awesome. 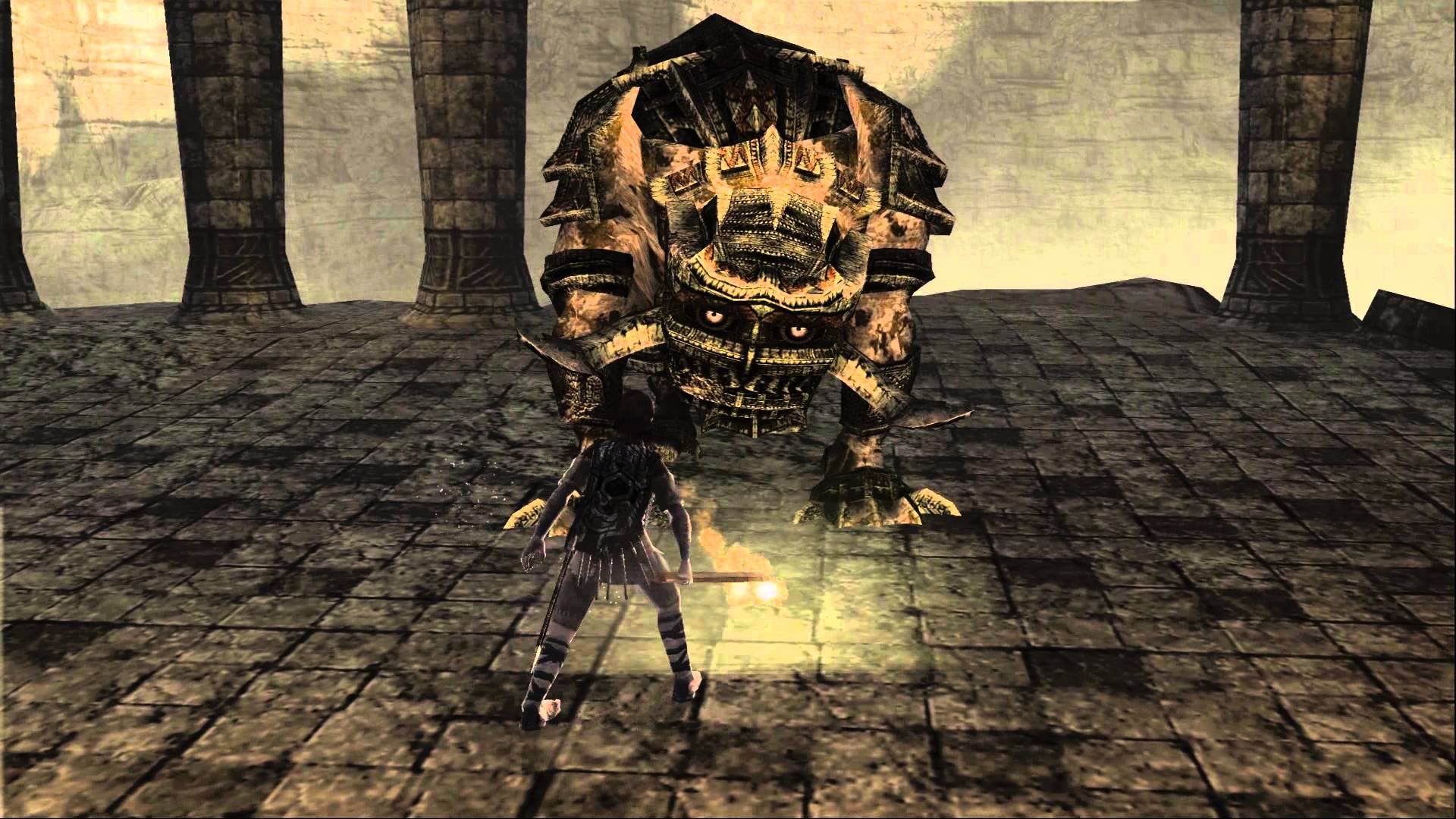 Shadow of the Colossus is full of surprises. Just when you think you know what to expect, the next colossus gives you something different. When it seems like colossi are all terrestrial, it throws in flying or aquatic creatures. By the time you get to Celosia (the 11th colossus), there’s a prototype for what a colossus is, and Celosia breaks it.

Instead of a skyscraping beast, Celosia is only about the size of an elephant. Rather than being slow and lumbering, it’s quick. Most importantly, where you’ve come to expect a colossus to have hair to grab onto, Celosia has only hardened armor.

Up until this fight, each colossus is a platforming puzzle with a relatively obvious starting point. The fight with Celosia turns the game on its head once again by being more of an environmental puzzle. Instead of figuring out the correct path to climb the boss, it’s a matter of figuring out how to even expose its soft body for climbing and stabbing.

Every colossus brings something new to learn, but it wasn’t until Celosia that I felt like a colossus could truly be anything. 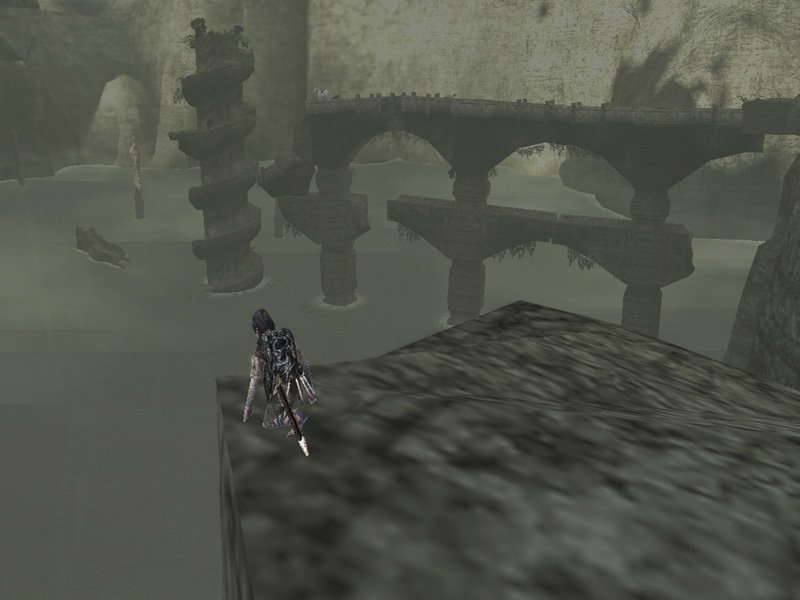 I’ve always feared the ocean. I saw Jaws at a young age, as many of us do and that was when it started. This expanse of dark void, teeming with all manner of life that ranged from breathtaking to nightmarish. I had a very vivid imagination growing up. Jaws opened the door to a lot of weird shit for me in terms of learning about the ocean, especially the abyssal plain. That’s why when information about Shadow of the Colossus started coming out, I knew that the water boss would be the moment for me.

The colossi never felt malignant. It felt like the world you existed in was just as much theirs as it was yours. So jumping into the water with Hydrus didn’t scare me. It gave me a sense of awe akin to what I’d imagine seeing a blue whale cresting. What did scare me though, was the feeling of oppression the water itself gave you. Even clinging to the back of Hydrus, when you’d take in the whole scene, it all felt very small compared to the murky darkness surrounding you. There was no other marine life to be seen. Maybe Hydrus was all alone. And the first time it encounters another living creature, you kill it. Damn this game.

I wish Hydrus had a friend. I wish I could have seen the bottom of that water. Even now, I feel anxious about having to play that part again. I feel like the darkness is going to reach up and swallow us both. That it’s this thing that is bigger than we can comprehend. Sometimes a game is just as much about what you don’t see than what is right in front of you. 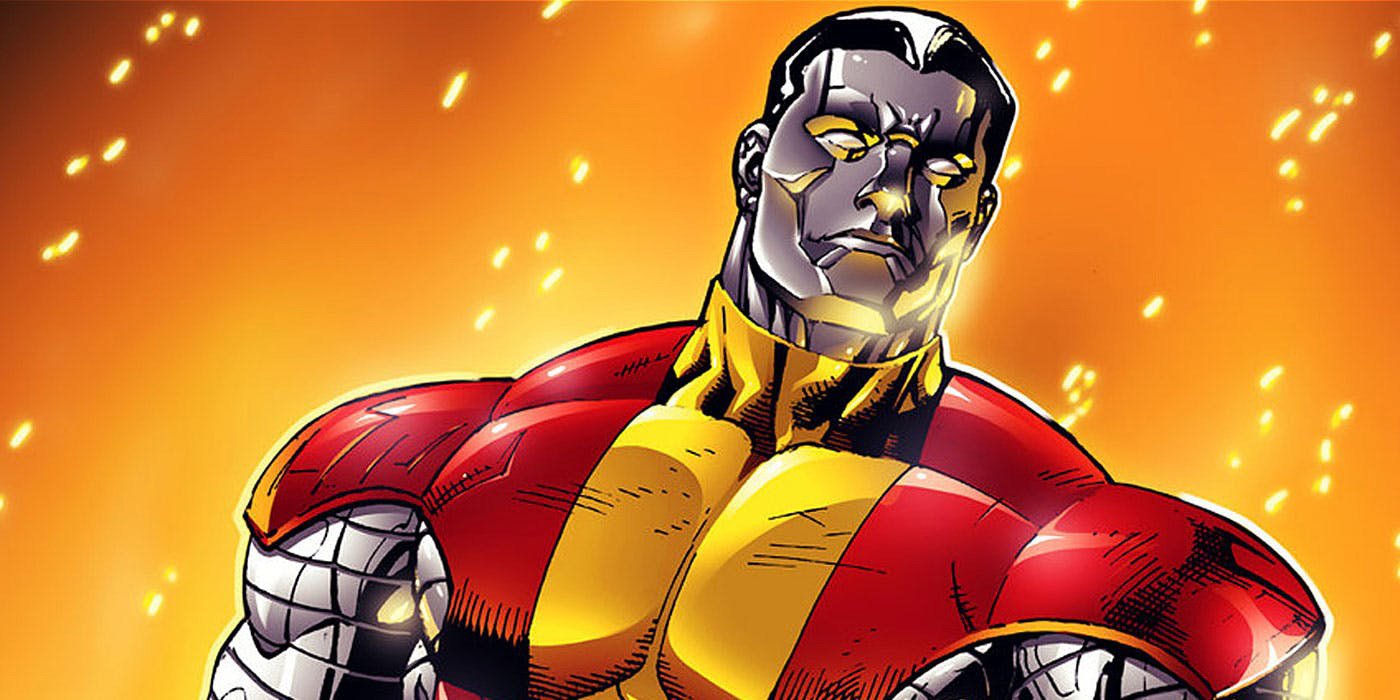 Oh shit, you meant those colossuses. 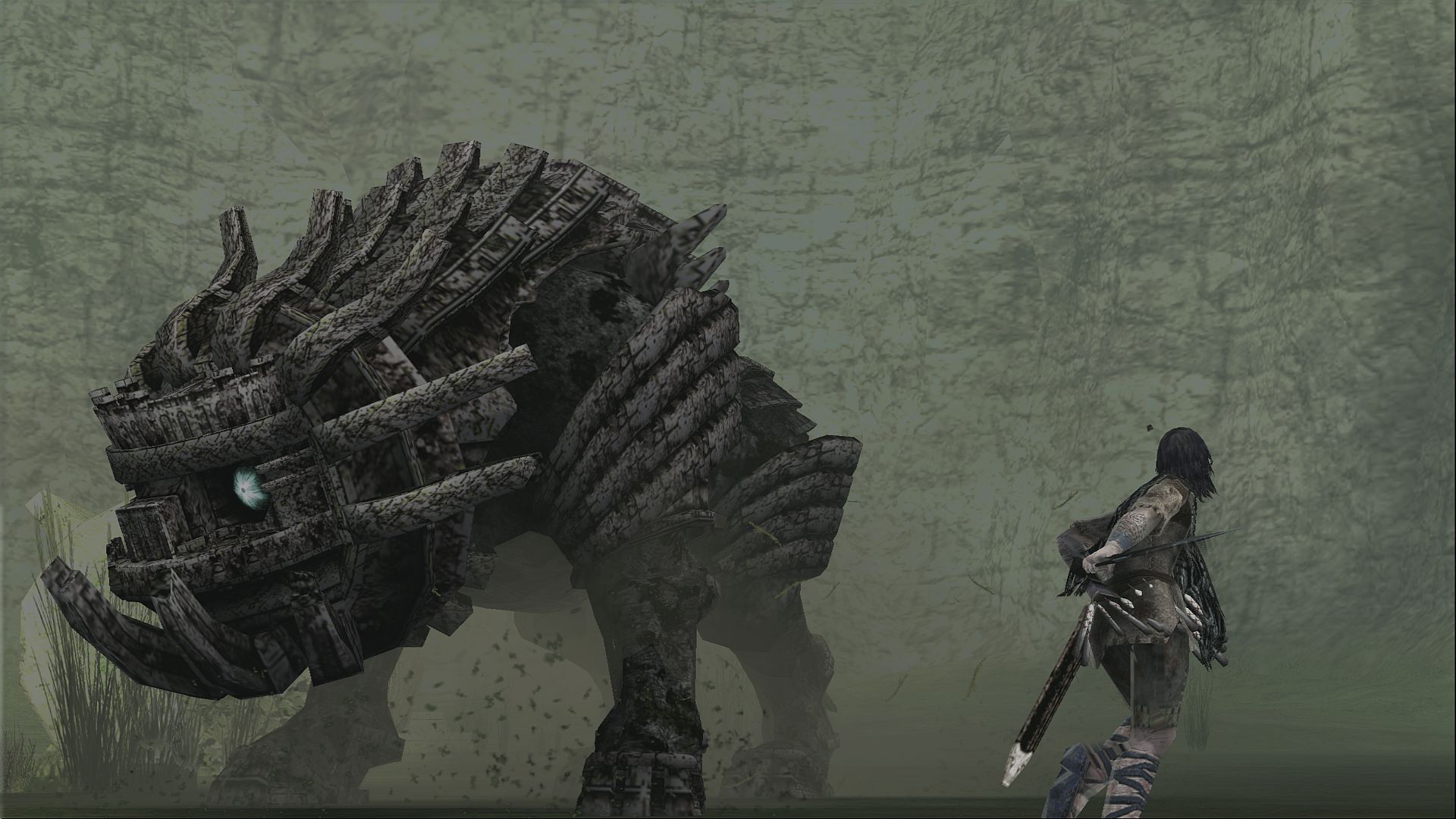 Chris is a meanie poopie head who stole my absolute favorite colossus but that’s okay, Shadow of the Colossus is not defined by a single boss battle but instead by the entire experience. It is hard to boil my love of this game down to a single battle, the entire package still ranks as one of my favorite games of all-time. It was beautiful when it released, and it remains to be one of the few games I try to replay every couple years.

Shadow of the Colossus plays a sneaky mental trick on you by telling you that there are only 16 colossi in the game so that by the time you reach the double digits you are growing weary of your task. It’s the knowledge that there are only a few left that helps push you forward. By the time I had reached the 14th colossus in my original playthrough I was wondering if I could beat the game. Each subsequent battle had ramped up the difficulty where the puzzle elements became tougher and tougher to the point where some battles would take the better part of an hour. Then came Cenobia. A dog like colossus that sat atop a massive set of stairs. Upon seeing me as an intruder, Cenobia immediately went to defend its keep. Cenobia had no weaknesses, so the only thing I could do is run for my life.

Through the course of trying to survive, I was climbing over and through the ruins of a once noble city, all while my colossus hunter tried desperately to knock me down. While I scampered across ancient pillars and bridges there were two thoughts in my mind: “How the hell am I going to kill this thing?” and “My god, this must have been a beautiful city; what happened to it?”

Ultimately, I did defeat Cenobia but not after quite a few deaths. As I was transported back to the Shrine of Worship, the questions from the battle still hung in my mind. The battle is like a microcosm of the entire game, subtle storytelling shining through the more prominent action. It’s not the hardest battle in the game but it forces you to change your mentality which is a bold design choice but almost always makes for a memorable experience. 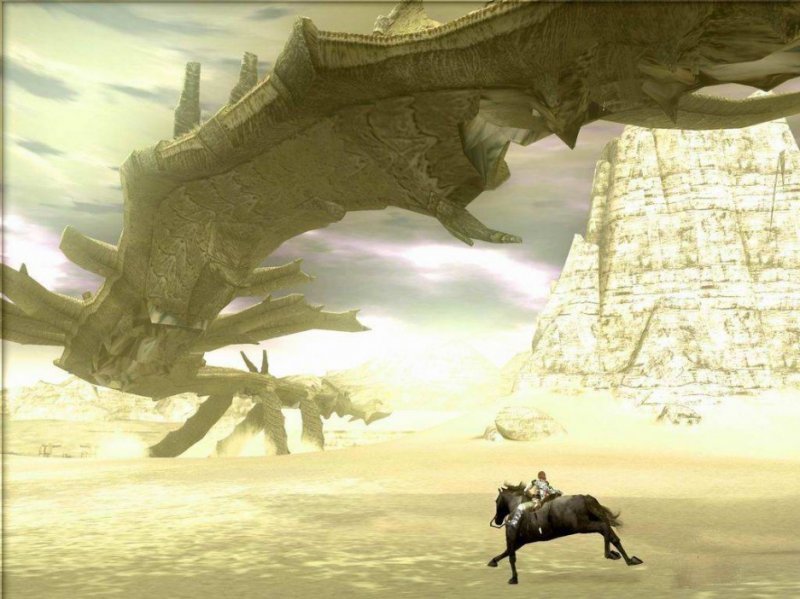 I recall one time I was listening to a podcast, and the question of your favorite colossus came up. Two of the hosts chimed in together, “The flying one!” and it seemed like the two disparate hosts finally had something in common.

And they were right back at square one. They say your favorite colossus can bring a bit of insight to your taste before learning anything else, but despite Chris’ Avion being a flier like my Phalanx, they couldn’t be anymore different. Avion instills a sense of panic as he dips and yaws at high speed, moisture visibly falling away at the depiction of speed.

Phalanx is peaceful and awe-inspiring. It’s probably not even interested in fighting back. To me, fighting Phalanx is like becoming a western bandit robbing a train — except this train flies, so getting on it is half the fun. Even after getting on top, he continues soaring through the air on its strange air sacs. You get to take in the world around you as you run atop this airborne locomotive, unlike the active sense of struggle and combat with Avion. I loved the chance to view the world from up top while riding this majestic dragon.

You don’t need the prompt, but I’m going to leave it here anyway: Which colossus do you hold most near and dear?