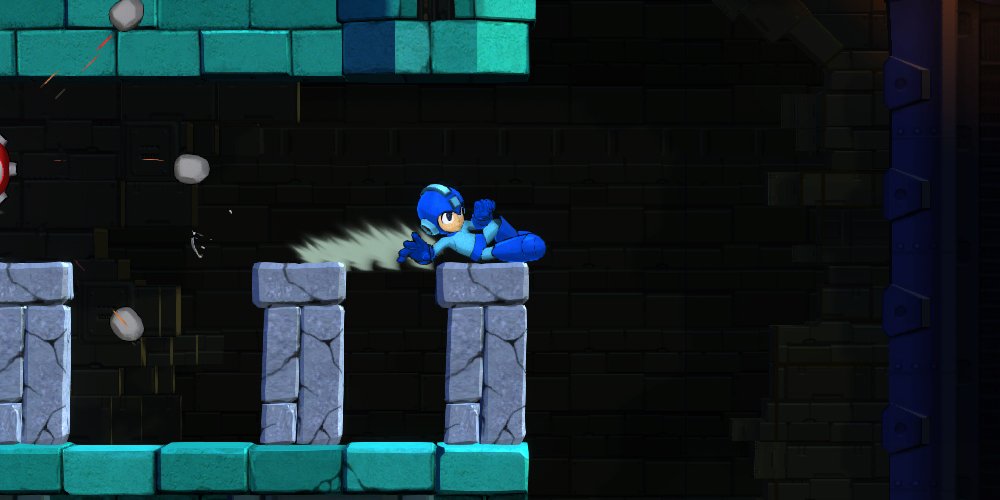 And could it be fixed with a few tweaks?

Running walking animations are easy to take for granted. When they do their job right, they look too natural to ever grab your attention while still adding energy and personality to the character. While it may look primitive now, the original NES Mega Man had some of the best running animations of its day. Back then, Mario, Link, and Simon Belmont all sort of hobbled their way to adventure. Mega Man, on the other hand, had a stride that looked confident and effortless.

That was achieved in part by the game’s artists who turned turn his body slightly “towards the camera” while he ran. This does a lot to keep Mega Man from looking flat and bland, but it’s also a cheat. Technically, if he ran at that angle in a real physical space, he’d end up running straight into the camera and through your TV screen, but subconsciously, we know 2D sprites don’t exist in a real physical space. With simple, low detail sprites, you could get away with cheats like that and not lose suspension of disbelief, as they work within their own visual logic.

As for the run animation in Mega Man 11, it might be a little too logical as of right now, like in the way that Dr. Spock’s adherence to an objective analysis of the facts can suck the life out of a party. Here’s a few idea as to why that is, and what Capcom can do to fix it.

Here’s a quick, hacked-together comparison between animation in Megaman 11, 8, and Smash WIi U pic.twitter.com/l1HRnGvWQh

Above is a comparison of the run animations from Mega Man 11, Mega Man 8, and Mega Man’s appearance in Smash Bros. As you can see, in Mega Man 11, the run animation has the character turned almost 100% to his side as he runs, while in Mega Man 8 and Smash Bros he’s turned slightly towards the camera, just as he did in the original Mega Man. Again, this adds depth and allows for motions that appear more enthusiastic and powerful. Watching someone run from a perfect side view is like watching someone walk a tightrope. It feel flat and cautious.

Some of the problems with Mega Man 11’s run animation stem from those pesky polygons. You can’t cheat with them in the same way that you can cheat with sprites. Maybe this goes without saying, but Polygon-based graphics work to replicate three dimensional objects, so our brains can’t help but expect characters made from polygons to follow the rules of real world as well. If they angled a character made from polygons toward the camera while having him run horizontally across the screen on a flat X Axis, they’d end up looking like they were skating sideways, which can actually be a problem with Mega Man’s run animation in Smash if you stare at it on a loop for too long.

That said, just because you’re made of polygons and are running from a perfect profile perspective doesn’t mean you have to look flat. Check out the run animation from Mega Man: Powered Up.

It’s definitely less dramatic than the run from Mega Man 8, but it’s still got a lot more pizzazz than the run from Mega Man 11. That’s because subtle twist, squash and stretch animations were applied to the character model itself as it runs. They add life to what might otherwise look like a rote and uninspired animation. Since the game is generally divorced from any attempts to replicate reality, with giant headed characters, flat colors, and world filled with fantasy technology, they can get away with bending their models in impossible ways. The end result is a cast of robots who look less like precise, metal machines and more like adorable, floppy little babies.

Mega Man 11 goes for a less cartoonish and silly vibe than Powered Up, so squash and stretch effects may not be a good fit for the game’s overall aesthetic. So does that mean that there is no way to give a less exaggerated, polygon-based version of Mega Man a lively run animation? The answer to that question lies in one of the worst selling Mega Man games ever; Mega Man Maverick Hunter X for PSP.

As you can see, the overall look of Maverick Hunter X is pretty close to what Capcom seems to be going for with Mega Man 11. The proportions of the characters and relative adherence to realistic body physics are roughly the same. No floppy baby feet here, just serious-faced robot boys on a mission. It’s no surprise then that Maverick Hunter X also has a perfect profile run animation, with no squash and stretch and a generally less energetic feel than the most other Mega Man games. Yet, it still has more oomph to it than the run animation seen in Mega Man 11.

The reasons for that are a combination of X’s overall posture and the duration of time he spends with his limbs at full extension. X’s whole body is bent forward, head tilted down, and his arms and legs extended at the peak of each of their movement at a greater distance from the body for a slightly longer period of time. Each of his steps is like a full-force kick off of the ground, with his center of gravity always positioned slightly in front of him. These little touches do just enough to keep his run from looking totally rigid.

So what does that mean for Mega Man 11? In short, the animators should play it less safe. If done just right, they could get away with adding a touch of the dramatic style of Maverick Hunter X, a little of the cutesy squash and stretch from Powered Up, and a pinch of the slightly angled run of the 2D Mega Man games. Then again, that’s sort of what Comcept went for with Mighty Number 9, and the results were a bit much.

Remember the Carlton dance? That’s how I feel about the run animation in Mighty Number 9. It’s definite energized, but less in a cool way, and more in a unnatural, desperate way. I chalk that up to Beck being a little too three dimensional for his own good, with more excessively bulbous extremities than even Mega Man, requiring broad arcing motions from his limbs to avoid the appearance of clipping into the rest of his body. With its more conservatively proportioned lead character and semi-cel shaded look, Mega Man 11 shouldn’t have to struggle against the same challenges, but it’s hard to say for sure from where I stand as an armchair developer.

Either way, I’m sure I’m going to love the game. I’ll just love it a little more if they can get the spring back into the blue bomber’s step.