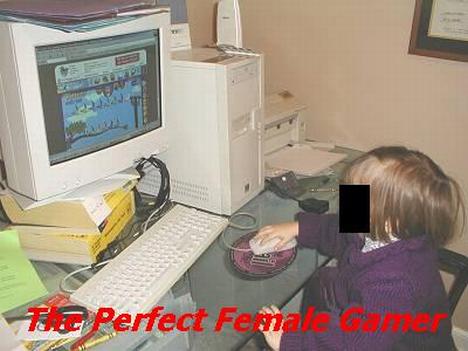 Okay, I’m a gamer and a woman; we all know that. I’ve been gaming since I was 6 when my Dad introduced me to computer games on his Commodore 64 and from there on I loved gaming. During that time, the video game industry did not market to women or girls and yet I still chose to play video games. I didn’t care if they marketed the games to me, because I wanted to play just the same. I didn’t care if they were made for women or not. Even now I don’t care if the industry markets to women gamers, because I don’t choose my games based on whether they are female or male type games. I play something because it’s got good graphics, good game play and a story line that interests me. Nowadays with so many female gamers playing and demanding to be recognized by the industry, the gaming companies are trying to include women in their marketing. Funny thing is that when the companies fail to market the right way to us, the female community is suddenly up in arms like the gaming companies don’t get us, but truthfully the problem is that they can’t market to us, because they don’t know what we want, because we don’t know what we want.

Female gamers demand equality in the industry, and yet we are the ones destroying any chance of being taken seriously by flip flopping on how we want to be treated. As a female in the gaming community, I’ve realized through trial and error that we as a group make things worse for ourselves sometimes without even realizing it, because we as group can’t decide how we want to be treated as a group. If you look at all the women gamers out there, you will see there are generally three types of gaming females, and two of those types are the ones killing gaming for the other group.

First you have the pretty girl gamer that post pictures of her on websites and always refers to herself as a girl gamer. I admit I started out as one of these because I didn’t realize how much I was hurting myself and my image in the long run. When it comes to gaming, guy gamers don’t care what you look or what sex you are, because they just want you to play games. The moment you post a picture of yourself or start with the whole I’m a girl gamer thing, you lose all creditability as a gamer and will have to start down the road of proving to the whole world that you actually game. Now I’m not blaming these types of girls saying it their fault for posting the pictures, but I’m just warning those female gamers out there that there are consequences to outing yourself, especially if you aren’t bad to look at. Ladies, by posting these pictures no one takes us seriously and in the end we just make ourselves look like attention whores they keep labeling us as. Plus consider this for one second, there are three women that frequent Destructoid.com that I know of and I know what each of these women look like, yet I couldn’t tell you what half of the writers look like on Destructoid. Also out of these three female gamers, two of them posed half naked for our site or another gaming site and out of the hundreds of male gamers I know; only three of them posed half naked for Destructoid and all of them were doing it as a joke. I know what I’m saying sounds wrong, like I’m saying that we are responsible for the evil remarks people make about us, but I’m not trying to say that. I trying to show that unless someone decides to post a forum topic that asks for the readers to post pictures, male gamers are less likely to post avatars or pictures of themselves on gaming sites, and yet female gamers feel the need to include pictures and then whine about the consequences of doing so. What can’t we just use a Gears of War logo as an avatar like everyone else? I hate to say it, but I know why we post the pictures, because we do want the attention and we have no one but ourselves to blame when the gaming community treats us badly for it or fails to take us seriously. We especially can’t whine about how people treat us when we pose in our underwear. If someone wants to see your pictures or it related to a story or something, then it’s okay to post your pictures, but otherwise a picture will just be the start of something bad.

Pretty gamers are usually the types to come on a site and scream, “I’m a girl gamer and I’m a hot too” as if to say they are special, but this really only kills our image for the female gamers that just play and don’t need to the world to know they occasionally wear a skirt. All these websites for female gamers, female gaming clans and everything else specifically for women gamers just shows the gaming community that we are special and that we want to be treated different from them, but guess what… we aren’t special any more. The ESA site says that 38% of game players are women and that we spend only 6 minutes less a day than men who play video games. Those numbers continue to grow everyday which shows that female gamers are just as normal as male gamers now. We don’t need to have special sites to cater to our needs as females because we’re not mythical beasts only spoke of in legend anymore. We can hold our heads up high and log into a normal gaming site like Destructoid.com and not feel out of place. We don’t have to hide anymore, but still we choose to make these specialty sites for ourselves so we can continue being singled out. We “girl gamers”, whine about how the male gaming community tends to question our gaming abilities and mock us at every turn, but how are they suppose to treat us when you show up with pictures of yourself half naked, declaring “I’m a hot girl gamer and a member of the Girlie Vixens Clan”. You set yourself up to be singled out because you are singling yourself by declaring these things. Being a “grrl gamer” isn’t a thing to be shouting to the world about anymore because we’re not alone in the gaming world anymore. It would be like wearing a badge that says “Women can vote” about 50 years after women got the right to vote. Everybody knows women play games, and if they do treat you like a unicorn for being a female gamer, then that’s they’re fault for elevating you to a higher level, but if you do it, then you only have yourself to blame for what happens after that.

The second type of female gamer that is ruining it for the rest of the community is the uber woman gamer; the woman that spends every waking moment complaining about how the gaming industry doesn’t cater to them and will take offence to every little thing that is said about female gamers that doesn’t feel politically correct. If you want a good example of these types of gamers, then check out Official Shrub.com and read just one of their articles on gaming. Gamers like these hate gamers like me. I represent everything that is wrong with girl gamers. Heck, the very fact that I’m using terms like girl gamers or female gamer is probably annoying the heck out of them right now.

These types of feminism gamers take the role of hardcore female too far by constantly declaring the multiple reasons of why the gaming industry is sexist to women. From the clothes video game female characters wear to the term fanboy, anything and everything could be looked at as sexist and/or non-exclusive for women. Now I agree that sometimes the industry can insult the female gaming community with their poor attempts to market to us, but if you pick on every little thing that you consider sexist, then you’re going to end up with female characters that look like real women, and truthfully I don’t want to play as an Oprah look a like or as any other normal looking woman. Video games are about fantasy and about playing as something you want to be, which why game designers create male characters with big muscles, or a James Bond look and female characters with big boobs and a tiny waist. I can be fat in real life, but I can’t have a 28 inch waist and a DD bra size. Game designers don’t create characters to be sexist, they create them because they understand that gamers want fantasy characters to play with, so they can be for a few hours something they may not be in real life.

In the long run, the more you complain about the little things, the less the industry will want to cater to you or worst try to cater to you, but fail miserably and tick you off even more. If you stopped complaining for one second and realized that gaming has never been about gender from the beginning, then you wouldn’t care if Halo 2 was marketed towards you. You would just play it because you liked to play it. Be happy that at least game design companies are trying to please gamers from all walks of life with gender choices and sexual choices and stop complaining when they refer to you as a lady instead of woman. They’re just trying to be polite.

The type of female gamer all we should all strive to be is the type of woman that just plays games. They don’t complain about every little thing wrong with video games that they think is sexist, they don’t pose all pretty in their favorite Mario tank top and then post the picture on their favorite gaming site, and they don’t spend all their time on women gaming sites or join all women clans. They just play games. This is the type of gamer I should be and am trying to be because this was the type of gamer I started out as. I didn’t make a big deal about my gamer status because I didn’t care. I just played games. These are the types of female gamers the market should be focusing on, because they are marketed to the same way that men are marketed to; show us the game and how great it is and don’t try to relate it to our sex. So to sum up all my ranting, the truth is this: We female gamers tend to make things worse on ourselves either by flaunting our girl gamer status, or by demanding the industry cater to us and in the long run, all we need to do as my one of my fellow writers would say, is shut the froag up and just play games.

Filed under... #Industry Bull#Things gamers do