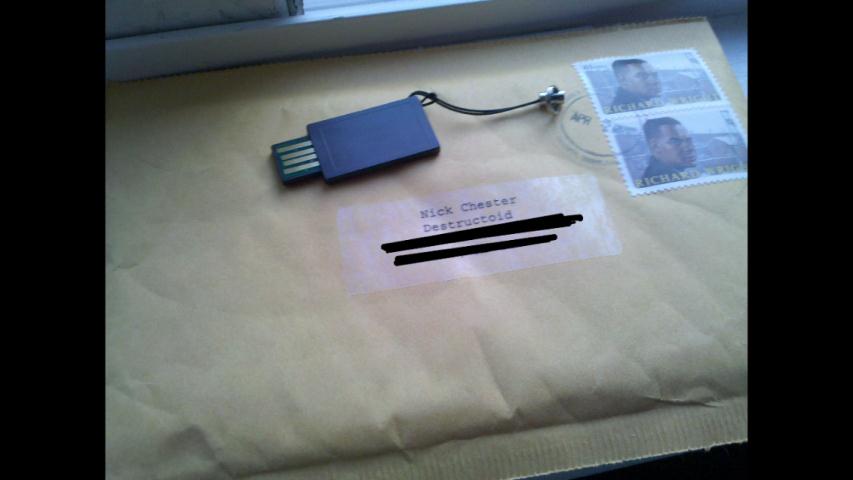 A small, unmarked package arrived at the offices of Destructoid East today. Inside was a small USB stick, which contained a text document and an audio file. The text document contained this text:

The audio file can be heard in the above video. It’s some crazy stuff. Can you crack the code? Well, before I had even had the package delivered, Joystiq already had it figure it out. You can check their findings, or allow me to spoil it for you: the code, once cracked, reveals the message “APRIL WEEK TWO.”

More confusion after the jump.

[Update: Forget the ARG, piecing together other clues points to this actually being a teaser for the upcoming reveal of the next game in the Call of Duty franchise.

Reports are coming in that non-press within the Call of Duty community have received the same package. Additional information that links the package to Activision would be the Google Analystics information, which can be found here. Note that all of the Web sites, including the one referenced when you unravel the clues, are registered to existing Activision properties.

If you’d like to see earlier (and likely wrong) speculation — including us thinking it was for Fallout: New Vegas or an upcoming title called The Outsider, hit the jump.]

What we don’t know is whether or not “APRIL WEEK TWO” (that’s next week) will bring with it yet another set of riddles, or a full-blown, easy to understand game-related announcement.

What we do know is that the package was post-marked as being sent from Maryland. Bethesda Softworks is located in Rockville, Maryland. We’ll be attending a Bethesda event in “APRIL WEEK FOUR,” so perhaps these things are related. Perhaps not.

It’s also been pointed out to me that the stamp on the letter is also a clue. It’s of author Richard Wright, whose second novel, The Outsider, was published in 1953. Developer Frontier Developments is currently working on an action-adventure title of the same name. As far as we know, the game has no publisher; perhaps the Maryland connection was only another clue — the game is set in present-day Washington DC. Or perhaps Bethesda is the publisher. Perhaps not.

Or how’s this for a direct link to an already announced project. According to the Fallout Wiki, Richard Wright is a character referenced in the series, yet never appears. With Fallout: New Vegas already in the cards, perhaps this can just be a countdown to a Fallout: New Vegas reveal. Perhaps not.