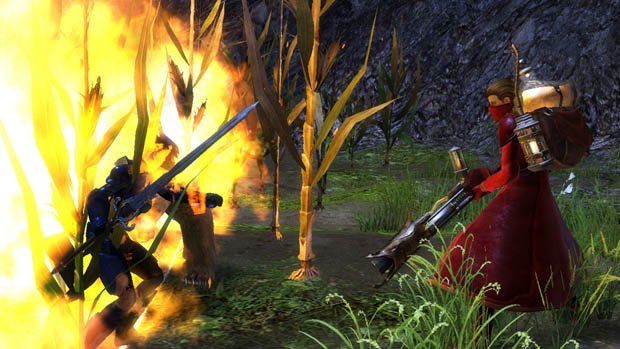 At PAX, I got the opportunity to spend some time with the developers of Guild Wars 2, a game I’ve been looking forward to for quite a while. The build I saw last weekend was a bit different from what was shown last year — the core game is the same, but the skills and some of the combat systems have seen changes. I also got a chance to see one of the maps for the Competitive PvP mode, and got more information on exactly how that mode is going to work.

Guild Wars 2 has made our “Most Wanted” list two years in a row. Based on what I saw at PAX, it’s still sitting up there.

The first part of the presentation I saw dealt with character creation, which expanded on the information we were given last year. This PAX, we actually were able to see the Charr character creation screen, and got a better sense of how the choices you make are reflected in your character.

The creation screen has all the features you’ve come to expect from modern RPGs — namely, the ability to finely tweak your character’s appearance, down to details like eye angle and forehead height. You also get the chance to set a primary armor color scheme for your character, composed of three different dye colors for different parts of your armor. Once you’ve set your primary dyes, any armor that drops for your character will automatically have your dye scheme applied to it, ensuring not only that your equipment matches, but that, with about 200 dye colors in all, your character will look relatively unique.

Once your character is actually created, you are asked a series of questions about his or her background that seriously impact the story. The answers to these questions set you on a storyline unique to your selection — a Charr who is a member of the Blood Legion will have a completely different starting experience from one who is part of the Ash Legion. As you progress, you’ll answer more questions and have more story paths unlocked, allowing you to create multiple characters of the same race and even class that experience completely different content as they move through the game.

The same basic PvE experience appears to be the same as it was last year, in that you walk around while quests and events dynamically spawn around you. Multiple players can jump in and out of events at any time, and they are large in scope and unique. We saw a low-level event in which players fought a giant possessed statue, and a huge battle against a massive dragon that required participants to man catapults, revive fallen technicians, guard the back lines against assailants, destroy what were essentially shambling undead bombs trying to break through barricades, and, of course, attack the actual dragon itself.

We were also shown a staged event sequence that began with a large ship launching an assault on a beach. The success or failure of your defense against the attack can trigger a series of events that ultimately leads to the invading force pushing deep inland and taking out a number of critical fortifications. Particularly noteworthy about the ship battle I saw was the underwater combat that occurred when our demoer swam out to attack the ship directly. The devs told us that approximately 20% of the Guild Wars 2 content is underwater. If you had a brief panic attack and flashed back to horrible memories of the Water Temple like I did, it may not be too bad. There’s no breath meter in the game at all, and the water sections are really being used for a 3D combat experience, rather than some air-hunting resource-managing nightmare.

Other, smaller changes from last year’s demo include the way skills work. Your skill set is still tied to the current weapon you’re using, but rather than gaining new skills through leveling, you gain them simply through use of that particular weapon. The more you fight with a weapon, the more skills you unlock on it, up to a total of five. Every character also has a healing skill, plus three non-weapon-related skills that can be swapped in and out.

Also of note is the fact that energy/mana are completely gone from the game — the only thing that limits your use of a skill is its cooldown. Dodging, which lets you completely avoid damage from basic melee and ranged attacks and can allow you to quickly evade an AoE attack before being harmed, has been given a meter that slowly refills over time, preventing you from becoming completely invincible by mastering the timing of your dodges.

The second half of the presentation specifically concerned one of the two types of PvP, Structured PvP. World PvP, which pits three different servers against each other in a two-week battle, was mentioned, but not expanded upon.

The Guild Wars 2 devs wanted the Competitive PvP experience to be something you can easily jump in and out of. Unlike in World PvP, the skills and experience you’ve earned in the main game don’t carry over — every character in Competitive PvP is at max level, and all members of a class have access to the same skills and equipment. This mode will be unlocked from the moment you purchase the game, so you don’t have to spend time playing through the PvE portion of the game if you don’t want to. Alternatively, if you don’t care about PvE but the big world battles are more your style, you’ll be able to take a main-game character from starting level to the level cap solely through World PvP rewards.

Competitive PvP is essentially a 5v5 or 10v10 capture-point-style game. Each map has three capture points that provide points to the team currently holding them, and the goal is to get to 500 points before the other team. Kills also provide points, but the primary method of point gathering will be through point control.

Each individual map also has secondary objectives and obstacles unique to that particular map. In the example map we were shown, each team had a large trebuchet that could be mounted and used. The trebuchet not only dealt huge damage to opposing players, but could also actually be fired at various buildings around the map to cause structural damage. One of the capture points, a clock tower, had its roof ripped open by the trebuchet, allowing teammates to enter from the top; in addition, the falling debris formed a ramp that gave less mobile classes an easier way to get up there without entering the building. While we didn’t see any other maps, we were told of one that didn’t have any trebuchets, but instead had a dragon flying over the map causing problems for members of both teams.

Because of the “pickup” style of play the devs were looking for, this PvP mode actually has a server browser, similar to those in Team Fortress or Modern Warfare. In addition to the servers ArenaNet will provide, players will be able to create and host their own servers, and server owners will have the ability to tweak modes and options.

Tragically, there is still no information about the beta, but work on Guild Wars 2 is clearly progressing. The game looked great on the show floor, and it seems like all the final systems are falling into place. I’m keeping an eye out for when the beta finally does launch, because GW2 is a game I definitely want to try out.