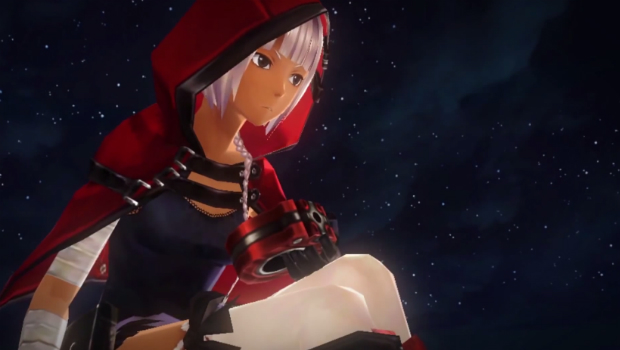 I put a sizable chunk of time into the original God Eater 2 on the Vita late last year. It was a solid entry in the long line of recent hunting action games, but certainly not without its fair share of issues. It suffered from a lack of content, and its AI was dreadful. The plentiful content updates helped a lot; online coop, new story missions, extra equipment. At the end of the day though, it still felt incomplete. The underlying mechanics were strong, so I was hopeful that we’d see an upgraded version ala Monster Hunter and the Ultimate/G releases sometime in the near future.

Featuring a new storyline, new characters, new weapons, and all sorts of other additions, Rage Burst‘s developers are pushing it as the definitive version of the game. I had a chance to go hands on with the Vita build and clear the two demo quests at Tokyo Game Show, and I came away feeling good about the changes.

The first quest available in the demo introduces the core new feature of the game, the Blood Rage mode. In the vanilla version of God Eater 2, every character had what was called Blood Arts. These special moves could be leveled up through constant use in combat, and were essentially flashy special attacks that did heavy damage at the cost of stamina. Much of GE2 was based around this new mechanic, and Rage Burst looks to flesh it out even further.

On the left side of the game screen is a lock of sorts. As you fight on through a mission, the lock starts to flash. Swiping the lock on the Vita’s touch screen will open up a few options. On the top right of the UI there will be a list of Aragami monsters currently on the field. By swiping the monster of your choosing, it takes you to the next selection screen. This bit is where you make what the game is calling a contract. Each contract will grant you a temporary buff of your choosing, but at the cost of fulfilling certain requirements on the battlefield. In the first quest, the requirement was that I deal some 5,000 hit points of damage to the boss monster in 30 seconds or less. Failure to do so reset the lock, forcing me to do the whole process over again. The better the buff, the more difficult the contract. Because the initial quest was designed to teach players about Blood Rage, I was able to repeat the process over and over again whether I failed or succeeded. The actual system is limited however, and doesn’t allow for spamming.

When you succeed at activating Blood Rage mode, your character grows what look like tiny wings of light, your movement gets snappier, and the whole thing just looks really cool. I’m not sure how it’s going to work balance-wise in the long run, but for now it seems like an interesting addition. I am however concerned with how tedious the process is. On more than one occasion I was unable to select the monster or contract I wanted because no matter how hard I swiped, it wasn’t registering on the Vita. Considering all of this happens while in battle, I’m hoping the tweak how it works before the final version of the game. That being said, it’s a Vita-unique problem and I doubt it’ll be an issue in the PS4 release. Though I suppose it could very well be that I just suck at swiping; the kind woman explaining the mechanics to me couldn’t help but giggle at me.

Also fresh to God Eater: Rage Burst is the Valiant Scythe, a new weapon type wielded by one of the brand new story characters. I played around with it during both missions and was impressed by its wide swinging range, though noticed that its starting animation was quite slow. Unfortunately it didn’t seem like the ideal weapon of choice against the new Aragami boss in the second quest. I’ll be damned if it didn’t look awesome though.

With the combat getting some substantial tweaks, here’s to hoping they add more fields and monsters to Rage Burst. With online coop a now-standard feature for the series, the only way to go is up. As for its chances of releasing out west? Your guess is as good as mine, though I suspect Bandai Namco might have been waiting for an upgraded version of God Eater 2 to be released before considering it for NA/EU like Capcom has been doing with its hunting franchise.

Or at least that’s what I tell myself before I go to bed.