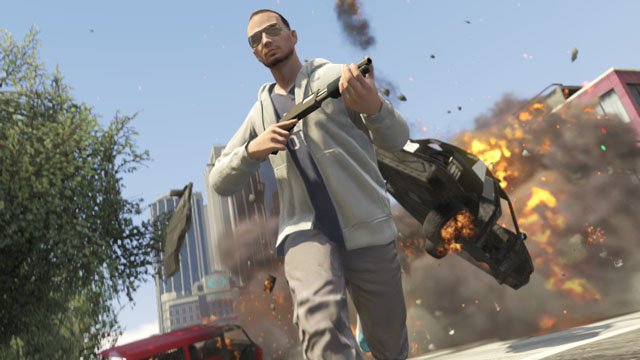 A quick guide on the beginning of your online adventure

Rockstar’s ambitious Grand Theft Auto Online launches tomorrow for those that have Grand Theft Auto V. How will you access it? First you’ll need to download a Title Update that will be released on the PlayStation Network and Xbox Live tomorrow around 7AM Eastern time if things run smoothly. Once the update is installed, you’ll boot up the game as you normally would and then pull up the character select wheel to select the newly unlocked fourth character slot. This will take you straight into GTA Online.

There’s a big narrative in GTA Online with an initial offering of 700 missions on top of racing, deathmatches and the like. As far as the narrative is concerned though, it takes place a few months prior to the events in GTA V.

Players will all have pads, and these will be save zones as to prevent any sort of griefing. So you can’t be a dick by shooting up someone’s home or stealing their cars. Plus, other players have to be invited in first before they can enter your pad.

Rockstar’s official site also details how the microtransaction stuff works, but to sum it up it will all be fair. “To allay some concerns we’ve heard on this subject, we can assure you that the game is designed such that the option of purchasable GTA$ should not disrupt the playing field.” No one can start up GTA Online and just start spending real money to rack up their own skills as everyone will have to rank up to their Reputation Points first.

Note that the Content Creator toll won’t be available right away. It’ll be released later this fall, so you won’t be able to create your own custom races or deathmatch jobs just yet.

Oh! And join the Destructoid Crew!