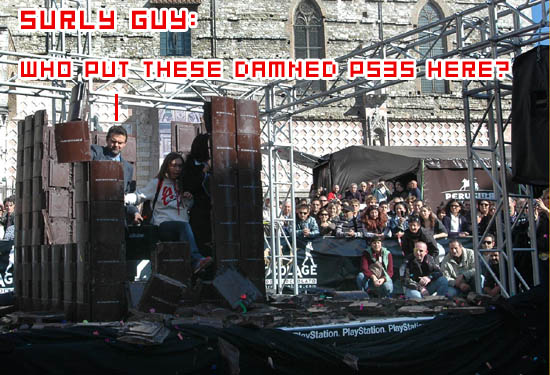 Hah! How’s that for a headline? The sad thing is that the headline will make less sense as you read on. This has to be the most messed up and messy marketing event ever.

PS3fanboy brings us pictures from a nine day chocolate lovers’ event called Eurochocolate, held in Perugia, Italy. Sony was there to join in the festivities, bringing 150 chocolate PS3s and a giant chocolate SIXAXIS controller to the party. Wait… what?

From what we could gather from the pictures, it looks like the cubical chocolate PS3 fort was kicked down and distributed to the crowd soon after its unveiling, and many chocolate-smeared faces rejoiced.

I don’t get it. Hit the jump to see more pictures.