The Capital Wastelands is no picnic. Dry and dead, the nuclear ravaged plains of Fallout 3 are as dangerous as they are uninviting. Killers and thieves, mutants and ghouls rove the radiation soaked Earth, while the civilized folk hide in shelters and cities composed of shrapnel and scraps. No. The Capital Wasteland is no picnic. It demands a special person and the right equipment to thrive in it.

It doesn’t take long to meet a member of The Brotherhood of Steel. The first thing you’ll notice is his armored face and metal bulk. His mask tells a story about survival. Two aged tubes connect to an elongated breathing device. They coil around the helmet’s egg-shaped frame, meeting at a point behind the neck. Bolts and bits attach a thick dark metal plate eyepiece to the helmet. It narrows in the middle like a furrowed brow. Gauntlets hang freely above a Brotherhood members shoulders. His chest, arms, legs and feet are encased in thick plating, much of it bolted together like everything else in the Wastelands.

The Brotherhood armor (and by extension, the Rebel armor) is unlike anything else seen in the game. I want to know why. You see, I’m on a journey of sorts. I want to know why studios include the armor that they do — big, space-like, anything. I asked four developers the same two questions about the armor in their game worlds. Bethesda, like Epic Games, answered them.

“You know, I think in a post-apocalyptic game like Fallout 3, when you put on a suit of Power Armor, you’re saying to the Wasteland, saying to the world, ‘I’m a badass. Bring it.’ These are the guys who have gone beyond survival. They’re no longer on the defensive, and are bringing the fight to the enemy. Because, when you think about it, so much of the equipment used by the guys in Fallout 3 is pure crap. The guns have decades-old tape on the stocks, everything is near broken, lots of stuff is cobbled together from spare parts. Everyone is barely surviving. But the Power Armor is constructed, and maintained. It’s a step above what any average Wasteland dweller has. And having access to equipment like means you’re probably part of an organized group, like the Brotherhood of Steel or Enclave — those are the guys with the resources and determination to strap themselves into Power Armor and go on the offensive.”

The Power Armor presented a few problems for Bethesda in the early design stages. The human character models aren’t hulking monstrosities. The armor needed to be large, but not large enough to interfere with animations or the mix-and match nature of the accessory system. It also needed to look cool. Bethesda took great care in creating the iconic armor of the game. 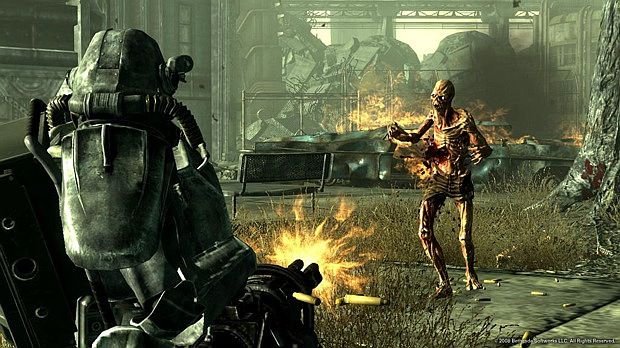 “Actually putting the Power Armor in Fallout 3 really did pose quite a few unique challenges for us. We started, of course, with the aesthetics. We had to nail the look of each suit of Power Armor in the game. This, of course, meant tons and tons of concept art. For the Brotherhood of Steel set, for example, we knew we wanted to keep the same general vibe as the Power Armor in the previous games, but update it a little. Make it feel more real: account for every nut, bolt and valve. But once we knew what we wanted it to look like, we still had to make a version of it that would work in the game. That’s actually easier said than done, because in Fallout 3, you wear the Power Armor like any set of clothes, so it had to have a small enough profile to work with the existing player animation system… while still looking bigger and bulkier than other armors,” Pagliarulo says.

“Something else I’m sure people aren’t aware of is how much of a challenge it was for us to offer the Power Armor and Power Armor Helmet as separate objects. They’re designed to look great together – but we also knew players would want to mix and match. You know, wear Power Armor with a Raider Helmet, or wear an Oasis robe with a Power Armor helmet. And when you allow that level of customization, you have to contend with a lot of mismatching, and object clipping, and whatnot. But in the end, we loved what we came up with, and the Brotherhood of Steel solider in Power Armor sort of became the iconic image for Fallout 3.”

The word iconic pops up again. Like Epic with the bulbous creation in Gears of War, Bethesda nailed a look that defined a game. And, of course, was rather useful when roving the Capital Wastelands.

Tomorrow, I’ll bring you thoughts from the creators of the Nano Muscle Suit.