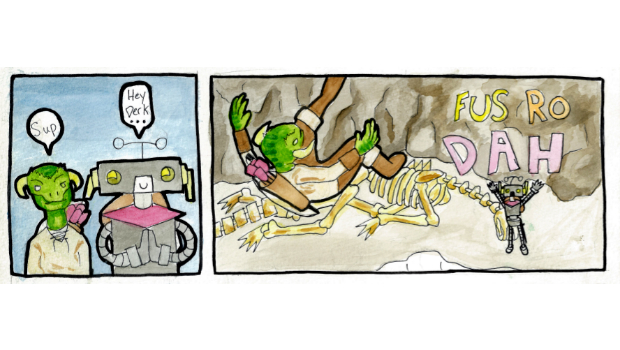 [Dtoid community blogger and artist MeanderBot shares this wonderful story and comic from his time with Skyrim. (Check below for the full comic.) Want to see your own work appear on the front page? Go write something! –Mr Andy Dixon]

I’ve always been a single player kind of guy. I dabble occasionally in online multiplayer or local co-op when I can convince some poor soul to play with me, but typically it’s just me sitting in front of a screen, lost and forgotten to the rest of the world. And that’s how I like it. It’s easy for me to vicariously live out the adventure and to treat a play through as such. I don’t mind the loneliness. I relish it. Usually.

When I played through Skyrim, I was hungry for the epic, solitary adventure it promised, and aside from a brief flirtation with Morrowind, this was my first Elder Scrolls game. I eagerly rolled up an Argonian (because f*ck yeah, lizards) named Onnith. The novelty of not playing as a human appealed to me, and soon I was searching for other Argonians to be part of my adventure. But hours had past, and I was yet to see one. I came to a cave where I excitedly joined an Argonian and his companion to clear it out, only to find out that he would later betray us, and I would be forced to kill him. I found out that Argonians were kept as slaves and treated with racism (which I was disappointed to find out never affected how NPCs treated me). The pair of Argonians in Solitude hated me after a quest with the Thieves Guild, though I suppose that’s understandable. This left me with a want that I did not anticipate, and my relished solitude was starting to corrode into loneliness.

After wondering into Darkwater Crossing, I found a worried Argonian locked up in a cage, pleading for help. I happily obliged, and soon I had a friend for life. I started referring to him as Derk. I made up stories in my head that told of a pair of Argonian warriors roaming the lands in dragon scale armor, sneaking through the shadows, slaying many dragons and felling giants with a single dagger slash. I valued his companionship more than I ever have for a virtual character. On at least two occasions I loaded a previous save an hour back because I had told Derk to wait somewhere, completely forgot about him and then noticed he was missing much later. I wanted to run with him for the rest of my adventuring days.

I guess then that it was convenient that there was a bug that made him invincible. I didn’t realize this at first, but I noticed that he never went down and I never had to worry about healing him. I thought this was true for all companions but, again, I found out later that this is not true. And when you think your best friend is invincible, you don’t feel bad about occasionally sending him flying off of cliffs. Which only strengthened my relationship with him, I think.

Whenever you can push somebody off of a mountain, laugh uncontrollably as they fall and bounce off of the unyielding rock, only to have them run faithfully back to your side and follow you unquestioningly through grave danger, that’s a friendship you want to keep.