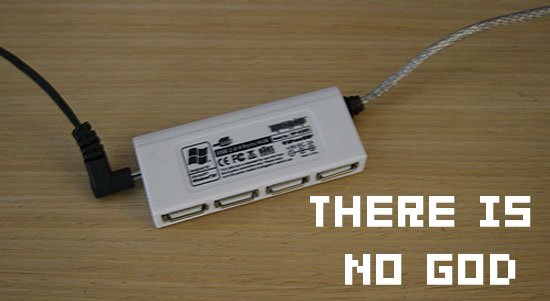 While I’m sure the folks over at the 1UP offices have been enjoying Rock Band, not all is well. You see, the Xbox 360 hardware only has three USB ports, and Rock Band utilizes four USB instruments at once. Harmonix and Electronic Arts have solved the problem by including a USB hub with the bundle that ships this November.

Unfortunately, 1UP is quick to point out that the USB hub will require external power. That’s right, it might be time to free up some room on that overflowing power strip or surge protector you’ve already been abusing. PlayStation 3 owners shouldn’t have an issue — there are already four USB ports right in the front of most PS3 consoles (the 40GB model only has two).

While I’m not going to say that this is going to turn me off from picking up the game as soon as humanly possible, (I played some of it again this weekend, and I haven’t washed my hands since), it’s a frustrating little detail. Maybe some of our tech savvy readers can clue us in as to why one might need a power adapter for a USB hub, but even with a logical explanation, there’s still plenty of room to whine.

Filed under... #Electronic Arts#Not what I had in mind#Rock Band