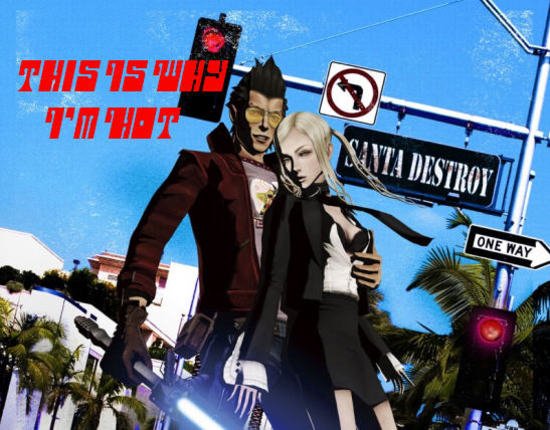 [Editor’s note: Whoa, a promoted story that isn’t related to the Monthly Musing theme?! That’s right boys and girls, we still recognize brilliant pieces of work that deserve to be promoted. Such as this case where Cowzilla3 writes an eye-opening piece on what No More Heroes really represents. — CTZ]

Videogames stories hardly ever confront the gamer, causing some sort of introspective look on the decisions they’ve made throughout the game and prompting them to not only take a look at what they are doing in the game but who they are as a person. Films, books and television all have a myriad of means of confronting their audience forcing them to think about their actions and the world around them. However, videogames more often then not supplant us in the role of hero and push us forward unquestioningly and linearly to a victorious end goal. Sure there have been the rare gems like BioShock or even Call of Duty 4, but even these games only confront the gamer’s ideals and not the gamer themselves. This is why I am so chagrinned that Suda51’s No More Heroes is not getting as much attention for its story and characters as the aforementioned games do.

Maybe it is the fact that it’s on a “less serious” console. Maybe it’s because the story is just that strange. Maybe it’s because of the different artistic style. Or maybe it’s the fact that the game wasn’t quite as big as others. Whatever the reason, it doesn’t seem like No More Heroes is getting the attention it deserves for its incredibly smart, confrontational and interesting ideas. So I’m going to do that here. There will be spoilers, but that isn’t really that important because as we will see, in the end it is not the story that makes the point but the game itself. Hit the jump to read on.

So what is the point of No More Heroes, you ask? The point, as I see it, is to challenge the perception of how games and gamers work. The point is to question our motivations for playing and beating games, prompting us to look at both ourselves as gamers and the ideas and ideals behind both games’ moralities and designs. Quite a hefty chunk for a game that looks like it’s a generation old, can be summed up in its gameplay as a “hack n’ slash” and whose primary character seems to have as much depth as the 2D-pixel-style graphics that surround him.

Maybe Travis Touchdown, the game’s protagonist, is the best place to start then because without realizing that he is one of the most complicated characters to ever grace a gaming console it is hard to accept that the rest of the game is really doing anything smart. Travis is shallow, but it is this shallowness that gives him his depth. When we’re introduced to Travis, his sole goal is to become the number 1 assassin in all of Santa Destroy and he’ll kill anyone who gets in his way. The opening of the game does nothing more then set us up to start killing, even excusing further details on the story because of the player’s short attention span. The point is made that he doesn’t care about the “why” of killing these people but simply that it would be cool to be the best and the gamer, despite not being told anything, agrees with him. In fact the only thing that really knocks him back when we are first introduced to the character is the cost of killing all these people.

It seems pretty straight forward and leads one to imagine a very traditional videogame character. Travis though is not just a traditional game hero, and here is where the crux of the game’s ideas are. Travis is a representation of gamers. Suda51 has created a character whose world functions like that of a gamer’s. As gamer’s, we start playing a game and killing easily. Much like Travis, our quest is often simply to be number one and we go through not really questioning the deaths of literally hundreds of people at our hands. The point of games is to win and even in games that challenge our morals like BioShock, in the end we are being propelled to destroy the ‘big bad’ and basically become number one. Thus Travis is us and we are Travis and as the game unfolds this becomes further confirmed and all the more troubling.

A look at the games world will help us to understand the connection between Travis and the gamer even more. Santa Destroy is comprised of a bunch of low resolution gray scale buildings whose main purpose are to house fights or distractions for Travis. The entire world is based around what Travis has interest in, there is literally nothing else. What is Travis interested in? What most young male gamers are: obsessively collecting objects (in this case clothes and models), killing bad guys, movies, the gym, sports and gorgeous women. If it doesn’t have to do with these things then it isn’t important to Travis and it doesn’t deserve anything more then an ugly gray building. Santa Destroy is a literal recreation of the self-centered world of a 20-something male and a comment on how this gaming generation views what is important in life. The inanity of the side quests throughout the game only emphasize this by creating a world that is both boring and uninteresting outside of Travis’ dream life. Whether or not poor game design can be excused for the sake of an artistic message is a subject for another blog but the point is that the entire game world is Travis’ world and thus, much like Travis represents us, his world represents ours’, as depressing as that may be.

So there we have the set-up. Travis is us, his world is ours and as it turns out when we’re gaming we have some pretty base instincts. This is all well and good but it hardly confronts us as gamers. In fact in the beginning of the game the commentary is far more satirical then it is confrontational. As Travis starts to rack up the bodies in cooler and cooler styles, the idea of simply killing everyone becomes more and more disturbing to Travis, especially when he realizes that being number one seems to have less and less meaning. Even more disturbing though is how this reflects upon the gamer himself/herself (though it’s debatable if a woman can see themselves reflected in Travis. If any women care to enlighten me I’d much appreciate it). If Travis is questioning all that he is doing in order to become number one, shouldn’t we then be questioning it too and not simply in this game but in gaming in general? As stated before, we are flung into battles to kill and win and become number one. But Travis suddenly asks why we desperately want to do this. What is the fucking point and why should we even care?

It becomes even more upsetting once Travis realizes that there really is no point. His wonton killing is leading him to the same inevitable conclusion of all games: winning. But being number one has kind of lost it’s shine after becoming bathed in the rivers of blood the game has spilled out. By the time Travis reaches the final boss, he is clearly continuing on not because he is interested in becoming number one but because it is simply the thing to do. This is then what we too do as gamers, pushing forward to the end of a game simply to end it because that is the path we have been put on. Thus when Travis’ true motivations are revealed they are glazed over in fast forward because his motivations didn’t matter, you got to number one. The outlandish story behind why Travis even started in the first place doesn’t truly matter, you’re at the boss and it’s over now. Despite not getting the big payoff of an explanation at the end of the game, what do we all do? We push on because, just like Travis, we’ve been set on this path and we want to win, despite how pointless even that now seems.

Does No More Heroes fall into its own trap then? Is the game cleverly pointing out that a gamer is usually simply killing his way towards being number one and then playing and ending in the exact same way? The answer to this is a very simple “no.” This is for two reasons really. The first reason being that we’d have to ignore the fact that the entire game itself is ironic, simultaneously critiquing games that are nothing but killing through levels and being that exact game itself, thus critiquing games via this irony too (again whether this is excusable in videogames is debatable but not discussed here). Secondly, if you’ve beaten the game on normal (mild) you know that this is not truly the end. The final battle takes place against yet another character with yet another absurd plot twist that doesn’t really matter. It is how this battle ends which truly defines the entire game.

Travis and his opponent, after a truly epic sword battle in which neither comes out on top, resign themselves to fighting forever as neither will ever win. Travis, despite the fact that he has fully realized that his fight to the top was both fake and pointless, is still fighting but having reached this point it is with a new realization that fighting was really the only point all along. Gamers would do the same thing, and do often do the same thing. Despite the killing having become pointless in terms of story and development, if the game went on we would go on with it in order to win. Travis has come to terms with this and realizes the only way out is to get a game over. As gamers we’re usually lead to a nice clean ending with the game designers holding our hands till the end of the story. When Travis realizes this isn’t going to happen in his game, that even now loose ends are popping up, finding “that exit they call paradise” becomes the only option to end the game. No more hero, no more game, no true winner, no true end.

Why did any of us start playing the game? Was it to unravel the mystery or be confronted in our ideals? I doubt it. We just wanted to chop people up with a light saber and Suda51 totally called us on it, and not just people who played No More Heroes but all gamers. It’s incredibly refreshing to play through a game that moves beyond surface value and becomes art not just through looking gorgeous or controls, but by challenging our perceptions. Because in the end, great art is something that not only moves us, makes us think and challenges who we are but also expands its medium and No More Heroes does all these things wonderfully.