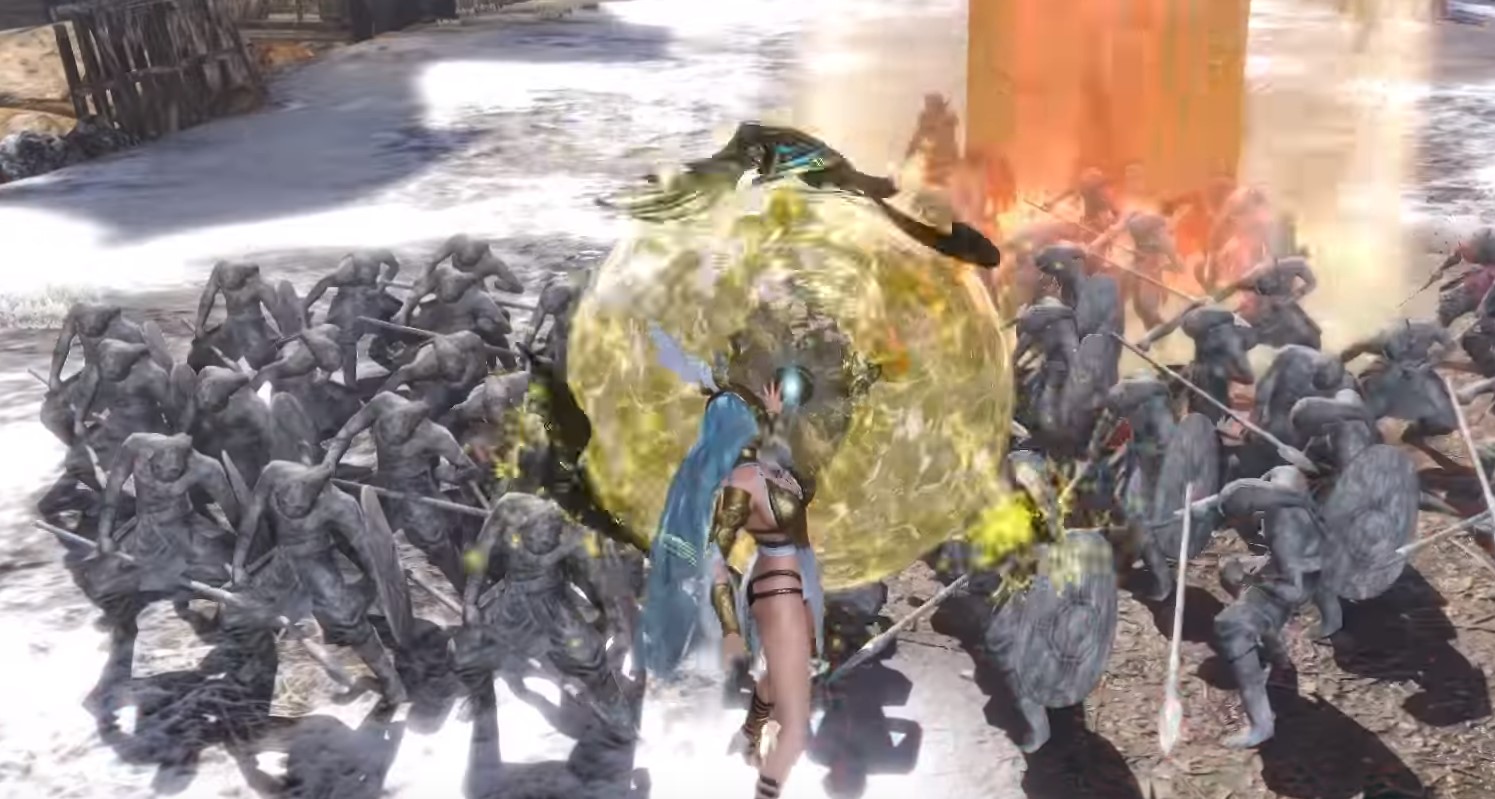 Koei Tecmo’s love-it-or-hate-it Musou series has enjoyed and suffered both extremes of its reputation lately. Hyrule Warriors and Warriors Orochi 3 are some of the most celebrated games in the series, so it’s little wonder I’m excited about Warriors Orochi 4’s impending October release. But Warriors All-Stars and Dynasty Warriors 9 disappointed many fans, while Fire Emblem Warriors split its fans between more compelling mechanics and questionable roster decisions. It’s left Warriors fans divided as to whether WO4 will fare as well as its predecessor.

All of these games use the same combo system. They have similar tactical elements of territory control and objective management. They’re all extremely repetitive hack-and-slash action games. All of their basic gameplay structures share the same aspects that appeal to their fans and annoy their detractors. And yet despite this similarity, their overlying structures are different enough for a lot of players to express doubt that the series’s future will keep them entertained. I see a reason to remain optimistic about Warriors Orochi 4 specifically, but to explain why I want to pick apart where these games (or rather, the ones I’ve played) succeed and fail in keeping their repetitive gameplay fresh.

Warriors All-Stars‘s story is a repeatable, branching campaign where the story only lasts a dozen or so plot battles, then you replay with all of your previous levels and gear á la New Game+. It sounds like an intriguing new structure for a Warriors game until you realize it forces replaying battles often. Fighting through the exact same stages with different objectives and characters feels far less repetitive than fighting through the exact same stages with the exact same objectives and characters. This New Game+ also re-locks your access to previously available characters.

Even All-Stars’ generic grinding battles contain next to no randomness or variance compared against each other. While grinding Monster Dens for EXP, I noticed that my objectives were always in the exact same locations for any given map. This got old very quickly, especially given the wider recommended level gap between many story battles. The constant resetting of story progress to start over made me less enthusiastic to cycle again.

This wouldn’t be so much of a problem if I could just hop into another mode for a quick bout or five, but therein lies the elephant in All-Stars’ room. There is no other mode. Not even Free Play. There is no way to progress beyond story endings without repeatedly blocking off access to other characters and fighting the same battles. It’s a forced limitation that can wear one’s patience very quickly in a gameplay style already loaded with repetition.

Hyrule Warriors felt much less samey, even though it was still very much so. While it boasted a more typical campaign, it has an Adventure Mode to thank for its acclaim. Adventure Mode has you take a nostalgia trip through a repurposed classic Zelda world map, battling a new fight at each “screen.” Even though these fights borrowed from common templates like “defuse the Bombchus by stabbing them” or “defeat X enemies,” they are constantly rearranged into new combinations with more stipulations. Despite how similar everything technically was, every new battle felt like a new challenge or at least a meaningful remix of an older one. And it was so much more fun to plow through for hours and hours on end because of that variance.

My only complaints with Adventure Mode are the steep late game grind walls. Some battles will require revisiting older stages to restock on key items. A-rank prizes instantly fall out of reach if you take a single hit on later stages. Thankfully, Definitive Edition smooths these walls out by adding a new shop for key items and replacing flat damage ranking thresholds with percentage-based ones. It’s also much easier to accept these walls given that they don’t rear until dozens of hours of play.

Warriors Orochi 3, on the other hand, has a much larger story mode. Its singular campaign was built around giving every character in its ridiculously massive roster a chance to shine (usually multiple). Thus, the story mode alone is stuffed with over a hundred encounters to progress through and constantly try out new characters. And Warriors story battles stick out more than individual battles in other modes, thanks to their narratives and objectives.

Even the later stages are balanced around the expectation of frequently switching to newer characters — on easy and normal at least. So when I hit a wall, I could easily surmount it by switching to a character I’ve used more previously, though I also found it fun to constantly switch up my team with new allies. When the difficulty ramped up and I faced a slew of game overs, I never had to grind to overcome the challenge. I just adjust my strategies or maybe break my piggy bank of bonus EXP.

Even after the story mode is exhausted, Warriors Orochi 3 Ultimate’s Gauntlet Mode plays out much like a second but distinct campaign. Converting Warriors‘ semi-tactical army warfare into a dungeon crawler is an odd but pleasant choice, putting a twist on the series’s elements of area control and hack-and-slashing. It’s a similarly overwhelming torrent of repetitive content, and the pseudo-roguelike elements add enough spice for battles to feel varied and keep me guessing what will happen next.

Hyrule Warriors, Warriors Orochi 3, and Warriors All-Stars all have different overarching goals to grind toward, and they all require a lion’s share of grinding. The former two do much more to provide variance between fights than the latter. Another difference is that the former two make it easier to progress in other directions instead of staying stuck at a single grind wall, while the latter forces continual backtracking. A sense of continual, persistent progression is a driving factor of any grind-driven game. All-Stars’ gamble on a repeatable story mode worked against it because it eliminated almost any sense of persistence. Sure, my heroes keep their levels and stats, but I’ll have to go through the exact same motions to re-unlock them.

Most Warriors games have alternate modes to recycle that content and preserve its freshness. That still isn’t enough to stave off boredom for everyone, and that’s okay. Dynasty Warriors will always be niche by its nature. But there is a threshold where even a niche’s most avid supporters get tired what they enjoy. The modes a game is built around are just as important as the core gameplay itself.

I have confidence that Warriors Orochi 4 won’t have this problem because it is a sequel to Orochi 3. According to the precedent it has set in the past, part of the Orochi spinoff series’s major pull is giving every character in its ridiculously massive roster enough room to shine. Some will naturally shine much more than others, but in order to simply fit them all into the same space, the story will be written around dozens of story battles with ample content. And according to footage that Koei Tecmo has streamed itself, these will be the traditional Orochi battles that fans are already familiar with. It’s simply natural to assume a sequel will borrow more cues from what it’s a sequel to than from its less popular cousins.

At the same time, the chickens haven’t hatched yet (there’s no reason to assume the story will be as massive as Orochi 3 Ultimate‘s) and there’s still much we don’t know. It’s safe to assume there will be no upheaval of the series’s status quo, unlike how Dynasty Warriors 9 was announced to be open world right from the start (and Koei also revealed that WO4 wouldn’t be an open world just as quickly). That still leaves the question of whether it will have enough quality content with enough variation to stay interesting.

The story mode may be a worthy ride itself, especially by introducing a new cast of main characters in its Greek pantheon rather than sticking squarely to Orochi’s goons. If it isn’t, many Warriors games are defined by their alternate modes/campaigns anyway. Koei Tecmo has remained hush-hush about other modes in WO4 for the time being, but I think they could restore a lot of faith from their fanbase if they share anything within the coming months. Another arcadey adventure like Gauntlet Mode that encourages leveraging familiar skills with new tactics would be great if that’s in its pipeline. Something that offers multiple paths of progression, like HW‘s Adventure Mode or WO3‘s plethora of side battles, also smooths out the grind.

Critiquing repetition of something fun has always felt weird to me because it sounds like an oxymoron on paper. If you enjoy doing it, it sounds like it’d be fun to do again and again. And it is for a while, but that eventually builds up boredom. Especially if you have to do it before moving onto something that comes after, like before beating a boss with stats too high for your current level.

I don’t even dislike Warriors All-Stars. It’s enjoyable to me, I just get tired of it extremely quickly. I don’t need Orochi 4 to be that much better either, I already have a half-dozen Warriors games. I’m also always excited to discover new characters, worlds, and features, so I’m interested in sequels all the same. But having faith is no guarantee when Zeus himself is determined to smack you in the face, so we’ll have to see for ourselves when Yukimura and friends out-smack him this Fall.