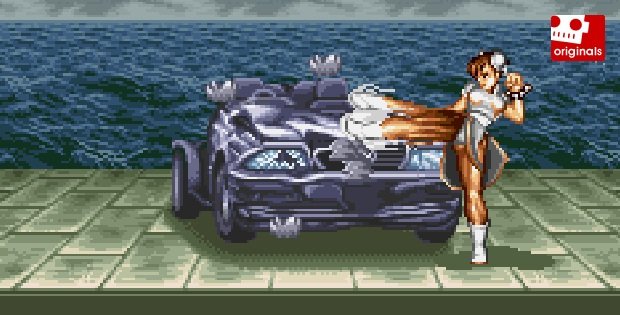 When I found out 2012 was a Leap Year, I got really excited. Not because anything really special happens on February 29th (outside of the magical unicorn that shows up at my door and grants me three wishes), but I knew it meant I could post a special themed feature. I LOVE POSTING THEMED FEATURES!

Since today is Leap Day — and everyone knows Leap Day is Father Time’s favorite bonus day! — I thought it best to reach out to you and ask: What is your favorite videogame bonus stage?

Do you like the simple collect-a-thons like the down-the-pipe/up-the-vine levels in the original Super Mario Bros. or the revolving bumper-filled rooms of Sonic the Hedgehog? Or are you a fan of the skill-based challenges like Abu’s bonus stage in Aladdin, the score multipliers in Galaga, or all the amazing barrel/banana extravaganzas from the early Donkey Kong Country games?

Me? My favorite will always be destroying the car in Street Fighter II. Nothing tops the satisfaction of destroying the BMW Mercedes whatever the hell kind of car it is with one of Chun-Li’s lightning kicks. Still makes me happy all these years later.

What is your favorite? Keep in mind that we are talking bonus stages, not those extra, unlockable levels like the Star Road in Super Mario World or Tricky Temple Too in Rayman Origins.

Here is what the rest of the Destructoid staff picked for their favorite videogame bonus stages:

Darren Nakamura
In Earthworm Jim there were bonus stages where you rode on what was essentially a jet engine with handlebars in a race against an anthropomorphic crow in a space suit, avoiding asteroids.  It was pretty rad.

Jonathan Holmes
The “beat the crap out of defenseless magic midgets” bonus stages in Golden Axe.
The “kill the ninjas in first person mode” game in Shinobi.
The “pop the balloons” game in Jumping Flash.

Jesse Cortez
I definitely loved the bonus stages you’d get with Sonic & Knuckles … I loved running on that 3D surface collecting the blue balls while avoiding the red ones.

Patrick Hancock
Does the end bonus stage from Paperboy count? The crazy X-Games themed obstacle course that just happened to be at the end of a street? I always felt that it gave the paperboy a chance to really have fun and use his bicycle skills to finally get the respect he deserves! But if his boss found him goofing around he’d be in trouble and we wouldn’t want that.
It was also a reminder to always have fun, even at work! When work throws angry grandmas and rabid dogs at you, always remember that if you just stick with it you’ll be rewarded with some kick-ass hoops and ramps! Life lessons, yo.

Niero
Collecting 100 keys in Smash TV (and whatever the equivalent was in Total Carnage).
Basically, you get a treasure room full of bikini women, electronics, gift boxes, weapons, extra lives, and mountains cash.  If I remember correctly they still troll you with land mines in those rooms.

Joseph Leray
The little shoot ‘em up at the end of Katamari Damacy.

Casey Baker
Honestly, the bonus stages in Sonic 2 have been my absolute favorite, mostly because they tie in with a strong childhood memory. My brothers (twin and older) and I would compete to get to the stage itself, and then compete to see who could get the most coins and the chaos emeralds.
I loved playing those stages, because they made me imagine how cool 3D would be if games ever went into the 3rd dimension.

Max Scoville
I love that stupid thing in the arcade version of Area 51 where you shoot the first four S.T.A.R. guys and then you get to play as an alien.

Tara Long
Sonic has always had awesome bonus stages, but the one from Sonic & Knuckles is def my favorite.
Also gotta echo Darren’s choice of Earthworm Jim‘s Andy Asteroids levels.

Hamza Aziz
The gambling minigame after you defeat enemies in Super Mario RPG.

Caitlin Cooke
+1 to Sonic bonus levels, although my all time fav was Sonic 2 — those “3D” race levels were the shit, and it was the first two-player bonus level that I remember being truly fantastic. I’m pretty sure I almost murdered a few people over those …

Becca Roberts
The bonus “gem” levels in Crash Bandicoot 3. The ones where the little platform you traveled off on was only visible if you managed to get to that part of the level without losing a life. They were always fun and quite challenging sometimes.

Wesley Ruscher
Loved the shuriken-chucking bonus stages at the end each level in Shinobi.

Brett Zeidler
The bonus stages in the original Crash Bandicoot come to mind the fastest, not only because of how difficult they were, but because the only way you could save in that game was at the end of the bonus stages. So, finding them was extremely important if you ever wanted to step away from the game.
Also, the “Test Your Might!” bonus stages in the Mortal Kombat series just because they’re so awesome.

Alasdair Duncan
Totally agree with Patrick: the obstacle course at the end of Paperboy is my favorite. Just reaching the end of the street was a thrill.

Maurice Tan
Does the extra bonus campaign after the end of Warcraft III count? Shit was awesome, and then it became WoW!

Sterling Lyons
The Star Fox-like flying segments in Skyblazer (the ones that only happen when you move to a new continent, not the side-scrolling ones).

Victoria Medina
The bug-eating minigame in Lion King on the Genesis. I played the hell out of that one when I was a kid.
And seconded for Jim’s mention of the Abu pot-smashing minigame.

Jonathan Ross
I don’t know if this counts as a bonus stage per se, but the five finger filet minigame in Full Throttle is incredibly badass, if only because Ben is stabbing his own hand with a knife.

Happy Leap Day, everyone! Get your moonlight elixir ready for the unicorn visit tonight!