This isn’t clickbait. This isn’t some article cashing in on hypothetical fan art of an Xbox turning into Megatron or a post about those awesome Mega Drive/PlayStation Transformers. This is my life, you fools. I’ve spent time pouring over this existential question. The world needs to know: what if videogame consoles were Transformers? Here are the Transformers they would be, mostly framed through the IDW comics because those are rad. 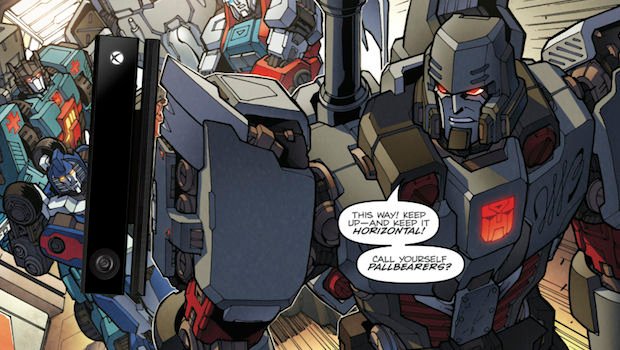 In Dark Cybertron, IDW’s first major Transformers-only crossover event, Decepticon leader Megatron did the impossible: he switched sides and joined the Autobots. Megatron has gone from trying to conquer the universe to exploring it with the wacky spacefaring cast of More than Meets the Eye (currently the best ongoing series in comics). It felt like a real stretch at the time (because it’s a simple change in character that is going to sell a lot of comic books, like Bucky Cap or Lady Thor) but the issues released since then have justified his change of heart. Many Transformers stories have tried to make the audience feel sympathy for Megatron, but none have ever been so successful. More than Meets the Eye successfully reconciles the ‘violent despot’ characterization we all know and love with the new ‘tired old revolutionary’ Megatron used to soften his previous deeds, crafting a new version of the character that feels absolutely definitive — against all odds.

This reminds me of the Xbox One. When the console was first revealed, there was a sizable amount of justified backlash. It was a device for busy rich people: expensive, packed with irrelevant features, saddled with baffling limitations, and bearing a hidden $60 per year cost. Everyone was worried they wouldn’t be able to play their single-player games if their Internet went down, or that the evil camera would watch them have sex in front of their television. Both fears were not totally unfounded, leading to an enormous backlash and low pre-order numbers. In order to save the system, Microsoft had to pull an about-face, reversing almost every controversial decision. Since then, we’ve seen the Xbox One drop the Kinect along with $100 off the MSRP, reach out to indies with the [email protected] program, and chase weird exclusives like Phantom Dust. Ever since Phil Spencer took over the Xbox division, the company has made positive strides towards fixing its reputation. 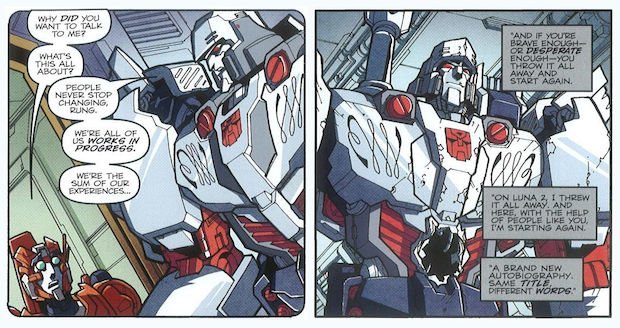 It’s not hard to see the parallels between Megatron (as written by James Roberts), Megatron (the character in More than Meets the Eye), and Phil Spencer’s work on the Xbox brand. When you want to make a change, be it financially motivated, a creative decision, or an emotionally motivated faction change, there has to be some revisionism. You have to convince yourself that the past doesn’t matter, and then you have to perform the Herculean task of convincing everyone else of the same. For the moment, it’s almost impossible to tell whether Megatron or Microsoft were successful. We won’t know how successful the Xbox One will be until well into the life cycle of the Xbox Two, and I honestly don’t know where Megatron’s character development could go from here. Either way, I’m looking forward to both. 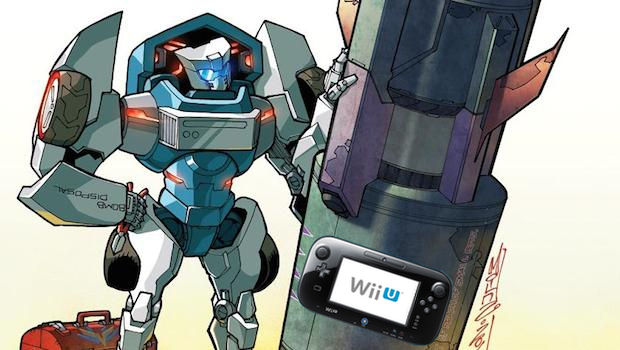 Tailgate is a relic. Not long after coming online, he fell into a sinkhole on Cybertron, only escaping his predicament after a six-million-year-long power nap. Physically, he is older than almost every character in More than Meets the Eye, but he approaches the Lost Light’s various adventures with a childlike enthusiasm. Which makes sense — he’s technically two weeks old when the comic begins. Tailgate used his age to fabricate a series of stories, even claiming he was a bomb disposal expert. He’s gone through some real trials over the course of the comic — including almost dying of old age and saving half of the Cybertronian race in one week — but he’s come into his own, accepting his true role as a waste disposal ‘bot and letting go of his tall tales.

It’s hard to hear the word ‘relic’ and not give the Wii U a little side-eye. When the console launched, it was months away from being outdated, with online decisions that were utterly baffling in the Xbox Live era and a launch library that was primarily a series of efforts at reclaiming old glories and ports nobody asked for. Hell, look at the name of the thing — Wii U. Smarter people than me have been pointing this out since the console was revealed, but I’ll be damned if that isn’t the most transparent attempt to move units I’ve ever seen. The Wii U smacked of an old man trying to convince the kids he was cool, not realizing he was a kid at heart the whole time. All he had to do was embrace his inner child and the people would come running.

There’s something futile about chasing old glories, especially when they’re made up. Nintendo has never been good with third parties. Remember that “historic partnership” between EA and Nintendo? Remember when Call of Duty: Ghosts coming to Wii U was a big deal? Where’s Advanced Warfare? Where’s Battlefield 4? The Wii U was a joke back when it was trying to be just another videogame console; another machine for you to enjoy those big tentpole releases. Today, it’s genuinely beloved, even if the rampant amiibo shortage threatens to overshadow Nintendo’s recent successes. Is the Wii U selling well? Of course not, that door closed when it launched with a crappy Mass Effect port and didn’t have a killer app until a year into the console’s life cycle. And Tailgate lost any chance of becoming an Old Cybertronian legend the second he fell unconscious. But we’ve got Mario Kart 8 now, and Tailgate defeated a genocidal despot by sticking a finger in his robo-brain. (God, I love these comics.) Accept your limitations, and use them to move forward. Can’t wait for whatever NX is! 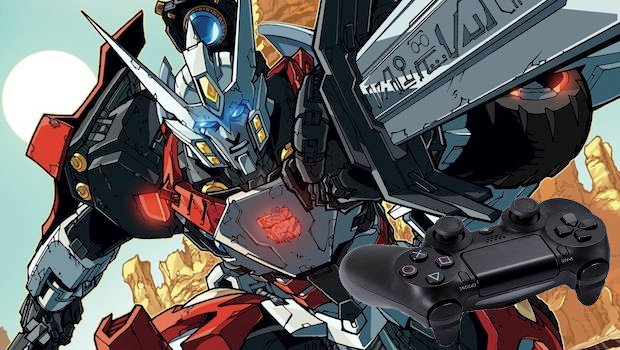 Everybody on the Internet goes through a phase where they make an awesome self-insert character for their favorite thing. You know the type: mysterious, silent, unkillable, tortured past, maybe a bit of a dark streak? We’ve all done it! Be honest with yourself. Maybe post your original character in the comments. Now, imagine a world where you were paid to make that character an official part of your favorite thing. Hell, the character even gets a toy! And the best part? The character will be just as badass as you imagined: no watering down. That’s Drift. And — surprise surprise! — when he premiered in the pages of the mega-event All Hail Megatron, everyone realized he was a cynical attempt at making a new fan-favorite character. Thankfully, he was redeemed in More than Meets the Eye, recast as a lovable hippie. Now, Drift is actually a fan favorite, despite being universally disliked when he first appeared. (Ironically, we’ve actually come full circle with the super racist Drift in the fourth Transformers movie)

And, let’s be real, nobody really liked the PlayStation 3 when it first came out either. It cost too much, the infamous “PS3 HAS NO GAMEZ” meme had a ring of truth to it (even though Resistance and Metal Gear Solid 4 were great) — everything about the console reeked of post-PS2 swagger. But, much like the Wii U, the PS3 stumbled out of the gate. Compare that to the PS4, a console that came out swinging, easily taking and holding the lead. Now, I can’t verify this for myself, but I’ve heard enough talk from enough different people that it makes sense: the PlayStation 4 is a Sony Computer Entertainment of America joint. That’s why you’re seeing people like Adam Boyes and Mark Cerny take the stage during E3 press conferences, and that’s why the company is going after Western nostalgia properties like Grim Fandango. This change in power seems to be working: the PS3 never saw positive press the likes of which we saw when Jack Tretton confirmed the PS4 could play used games.

Sometimes, it’s smart to let go of the wheel and let somebody else take over. I’m not saying Shane McCarthy (the creator of Drift) is a terrible writer, or that Sony Japan doesn’t know how to make a console. The PlayStation 2 is the best console of all time! But every so often, giving control of your creation to someone with a different vision works out best for all involved. It’s just a simple matter of seeing that maybe you aren’t the right person for this job. I mean, the PlayStation 4 has sold twenty million consoles so far, and Drift’s resurgence in popularity got him another mini-series. Leaving your pride at the door works, as it turns out. 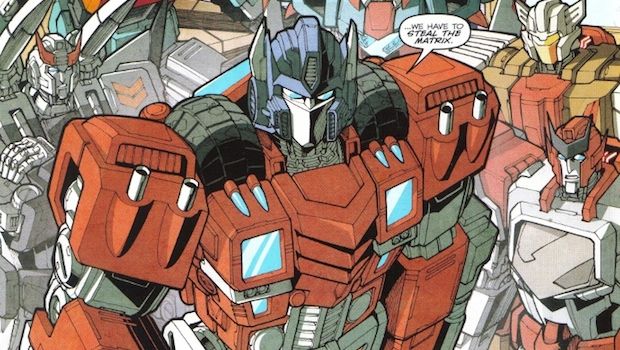 Maybe that’s the crux of all three of these consoles: pride. The Xbox One isn’t trying to shove terrible ideas down our throats, the Wii U is no longer convinced it can be something it’s not, and the PS4 isn’t asking for $600. In many ways, success is about letting go of that pride, learning to accept your limitations and playing to your strengths. And it may have taken a little while, but I feel like each console is currently taking that to heart. I like where these consoles are at right now, and I think we’ve got a fantastic generation ahead of us.

Also, Transformers are great. Thank you.