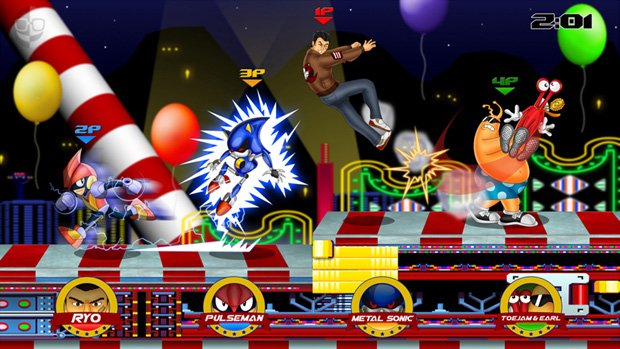 Because if Sony can have a Smash clone, why can’t Sega?

No matter how much good press PlayStation All-Stars Battle Royale receives, it’ll never quite settle with me. The fact that it is a “clone” of Super Smash Bros. isn’t what’s bothersome — I personally had a grand time with the game at E3. I just can’t get over the bland lineup of grim dark hooligans. Where’s the color? Where’s the pizzazz?

Know which company has a ton of color and pizzazz? Sega. It already has an umbrella label, Sega Superstars, for its range of crossover titles. For instance, the upcoming Sonic & All-Stars Racing Transformed pulls characters from Sonic the Hedgehog, Samba de Amigo, Jet Set Radio, Golden Axe, Skies of Arcadia, and more. The next logical step would be to take away their karts and tennis rackets and let them beat the living piss out of one another.

Chilean artist twins Maximiliano and Leonardo, under the joint pseudonym xamoel, have gone to great lengths to create the most balls-awesome Sega crossover imaginable, Sonic & Sega All-Stars Warzone. Only in this dream fighter can Earl pick up ToeJam and use him to wallop Ryo Hazuki, can Bayonetta and the Space Harrier stare each other down like Old West gunslingers, or can Comix Zone‘s Sketch Turner pop Billy Hatcher right in the kisser.

Filed under... #Artsy Fartsy#Clones#Cooler than the other side of the pillow#Gallery#Offbeat#Sega#Sonic#Things gamers do