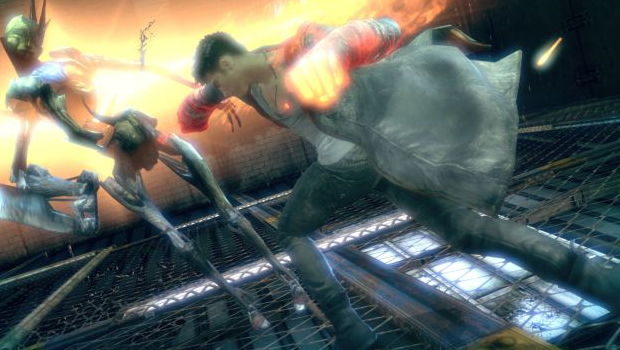 So much tasty rage

DmC: Devil May Cry is easily one of the most controversial releases in a good long time. Although a large section of the fanbase has been slowly won over by Capcom and Ninja Theory’s promotion, there is still a highly dedicated percentage willing to remind everybody how bad the game is.

The latest trailer, released this past week, is no different. As usually, we have done JOURNALISM to get to the root of the matter and pull out the most important reactions. This time around, using the PlayStation-uploaded Youtube version of the trailer, we find a core of enthusiastic fans repeatedly commenting on the video, either to defend or attack it.

As you might expect, wise words and meaningful criticisms are shared.

“I﻿ threw up a little” – killerschemetterling

“This﻿ is an abortion, not a sequel.” – Longcawk

“>Vorgil in a fedora OH GOD, THE FUCK UPS JUST KEEP ON COMING. I’ll never play this game, but I swear,﻿ it’s already provided me with more hours of entertainment then most.” – Canadish

“FYI I played the demo at Comic Con and the gameplay was fucking horrible. Its more than the fact that Donte looks like a douchey punk rocker rapist based on Tameem Antoniades’ look. It’s more than the fact that the story and dialogue are worse than fanfiction. It’s the﻿ fact that the gameplay looks fucking boring, repetitive, and slow. It’s a downgrade from the combat in DMC3 & 4, and panders WAY too much to casual gamers. That’s why it’s shit. Now quit being a deluded fanboy you stupid cunt.” – IEATFOOOOD

“Oh﻿ god. It’s everything bad about Devil May Cry, amplified and drenched in crappy hardcore music and Hot Topic “style.” Forget about updating DMC, this is the most late 90s/ early 00s thing ever in the worst ways. I keep expecting Fred Durst and ICP to pop out and start a ‘dope rap battle'” – Clichedisdain

“I LIKE HOW MUFUCKAS GET ON HERE & TRY TO CONVINCE PEOPLE INTO NOT BUYIN THIS GAME,﻿ IF U THINKVTHIS GAME LOOKS NICE BY ALL MEANS PURCHASE IT.” – neji361style

“‘You’ve never played a good game in your life if you think this looks like anything but generic garbage.” – TheWeegeeToast

“Good gamers can judge games from footage and trailers without playing it. If you think this looks good you’re just﻿ a bad gamer.” – TheWeegeeToast

“No, you are NOT Dante. You﻿ are an angsty teenage poser.” – 8ferrary8

“Why would anyone want to play as this game’s Virgil? He looks like an even bigger tool than the new Dante. On top of making them both look like Amerishit they actually had the nerve to give him a douchy fedora. It’s﻿ absolutely pathetic.” – TheWeegyToast

“Fedora’s are only worn by hipster﻿ faggots.” – IEATFOOOOD

“It’s because this game is being made by Ninja Theory, a group of complete fucking amateur﻿ game developers who haven’t made a single good and memorable game. I played the demo. I KNOW that it will be dogshit. And FYI DMC3 & 4 were directed by Hideaki Itsuno and were great games. Kamiya only directed the first game. And before you try to say that Itsuno is helping to work on the game, he barely had any involvement since he was dedicated to making Dragon’s Dogma. But by all means, enjoy wasting $60” – IEATFOOOOD

“Haters gonna hate, all because he doesn’t﻿ have weeaboo-tastic long white hair you’re gonna miss out on what looks like an awesome game._” – Czarewich