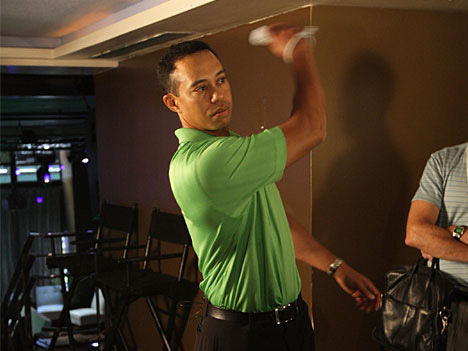 Tiger Woods might have been able to walk on water a while back, but I imagine that that’s pretty difficult when you’ve got a left ACL that’s recovering from being surgically repaired. Right now, he has to walk in a straight line at all times — like the bikes in Tron, I guess. He can’t even jog, let alone play golf; he says he won’t even start hitting practice balls again until the beginning of next year.

But thanks to the magic of video games, Woods’ fierce competitive spirit doesn’t have to be dormant. According to a USA TODAY story from a Tiger Woods PGA Tour 09 promotional event in New York last week — which Destructoid was not invited to, mind you — Woods often has friends over for “gaming night,” during which they throw $5 into a winner-take-all pot. Woods said that they mostly play “[his] game,” i.e., Tiger Woods PGA Tour, as well as Madden. He says he’s playing a lot more videogames now that he can’t really do much else in the way of playing or training for golf.

Sure, virtual golfing may not hold a candle to the real thing — in a video interview at USA TODAY, you can tell just how much Woods misses golfing — but if you’re in a situation like he is and gaming is all you’ve got, it provides a reasonable approximation. And of course, you can certainly be just as competitive with your friends as you can on the fairway. Tiger seems to prefer the Wii version, which he says is a great way to get kids — who may not always have access to play the real sport — into golf.

In addition, you may be interested to know that EA Sports’ Tiger Woods PGA Tour franchise was the second-best-selling sports game (second to Madden, of course) last year, with over 2.1 million copies sold. Peter Moore believes this is because Tiger is a globally recognized athlete, whereas American football really only has a huge following in, well, America. People in India don’t know Eli Manning from his brother Peyton, but they definitely know who Tiger Woods is.