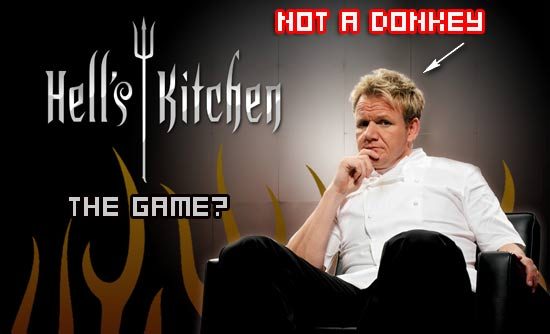 With the popularity of Cooking Mama, it was only a matter of time before somebody came up with the “grand” idea of giving the most entertaining chef on television his own game to punish us with. Announced for sometime in 2008 by none other than “who the heck are we again?” Ludia, the game promises to tap into the trademark intensity that Gordon Ramsay is known for.

On one hand, I find myself terribly excited by this news. On the other, I cringe in fear at what a bastardization of a great show this might turn out to be. I’m as big a fan of Hell’s Kitchen as you can get, and I look forward to seeing Ramsay “come undone” each week in fits of rage over the littlest of things. For the first time in my life, I actually care about a cooking/reality show. That alone speaks volumes.

At this point, the game is said to be for all major platforms, including consoles, PCs, and even cell phones. I’m not sure how well calling people “DONKEY!” will go over with Nintendo’s audience (should the game end up on the Wii), but throwing plates and dumping entrées on hapless people by way of the Wiimote would be the best use of the waggle-stick yet. On further thought, this man could probably make Simon Cowell cry — which is no easy feat. I can’t wait! Would you buy this game?