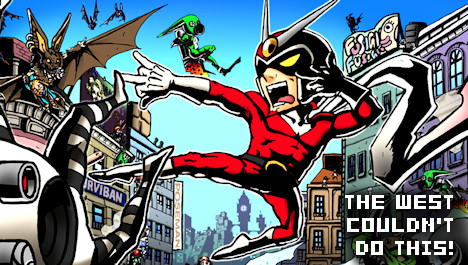 Platinum Games may be something of a hardcore gamer darling right now, with its Okami pedigree and upcoming hot titles such as MadWorld and Bayonetta, but the small developer is humble. Game creator Atsushi Inaba shared his thoughts on international game development, confessing that he feels the West has outclassed the East.

“To be honest, I think that western developers are superior to those in Japan overall,” said Inaba, who is responsible for creating Viewtiful Joe. “So we the Japanese developers should realize that we have to work hard to reach the western level. We’re fast reaching a stage where it’s going to be about individual developers and not about what country they are in, globalization is coming to our industry too.”

Inaba isn’t the first Japanese developer to share these sentiments, and he probably won’t be the last. I don’t want to agree with him, but having been forced to play Onechanbara this past week, I really have no choice.