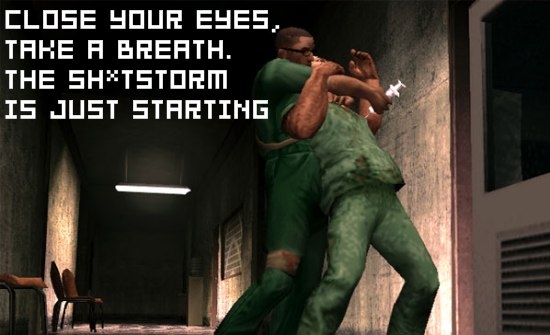 In case you didn’t know, Manhunt 2 is released tomorrow, set for a fitting Halloween release date. As expected, the imbecile parade has been out in full force, with panic and fear setting in for the release of this so-called ‘violent’ videogame (remember, un-sentient plastic is incapable of violence).

We’ve had Rockstar defending its artistic creativity, and everyone who isn’t Rockstar attacking everything else. The parade of over-reaction is far too long and stupid to cram into one frontpage post, so please join me after the jump, won’t you? We’ll have tea, cakes and more violence pornography than you can wave a blood-drenched crowbar at.

Remember, if you buy Manhunt 2 tomorrow, you will murder someone the next day, and if you read the rest of this article, you’ll feel like taking that crowbar to yourself.

Rockstar’s vice president of product development Jeronimo Barrera today defended Rockstar’s decision to make edits to Manhunt 2, edits necessary to receive an M-rating from the ESRB as opposed to a financially devastating AO.

Barrera denied that compromises to the artistic vision of Manhunt 2 were made. He claims that the content and vision are intact and that they “didn’t neuter the game as people say [they] have.”

“You know, a lot of people just believe this is a murder simulator and all you do is kill people,” Barrera added. “But the reality is that there’s a really strong narrative… There are conversations to be had about this game — intelligent conversations. That’s what we want to do: get people interested in those [things], rather than ban this game because of X, Y and Z.”

The product development VP also suggested that the company would consider Manhunt multiplayer in the future. “Who knows where the Manhunt series is going to go? And that’s definitely something that warrants some exploring on our part for sure,” he stated when asked about the idea.

As Rockstar continues to fight the game’s UK ban, I sit impressed that a man called Jeronimo exists.

California’s State Senator and vehement antigamer Leland Yee has issued a press release warning parents about the Halloween release of Manhunt 2. In his scaremongering announcement, Yee called hardworking games developers “purveyors of violence,” before listing a simple videogame as one of the many dangers of the season.

Not surprisingly, this game is being released on Halloween. Halloween already presents many safety concerns for parents.  With the release of Manhunt 2, parents will now face a new challenge from the purveyors of violence.

By the way, as soon as I see these mythical effects, I’ll start to panic. Or rather, I’ll just sensibly keep such games away from kids, like a reasonable person can do without resorting to attacks and scare tactics.

Common Sense Media is no fan of Manhunt 2, having already called for a parental boycott, but it went one step further at its San Francisco press conference, attacking the game as violent pornography and detailing scenes from the game. The group, for the record, admitted that it didn’t know what scenes had and hadn’t made the cut, and detailed at least one scene that was no longer in the retail version. Still, no time to do research when you’re trying to cause hysteria, eh?

“In my opinion, it’s the most senselessly violent and offensive thing I’ve ever watched,” bitched CSM CEO Jim Steyer. “It’s disgusting. It’s so violent, it struck me personally as pornographic violence.”

As with others in the reactionary camp, CSM demanded to know what scenes had been cut in order to achieve the game’s M-rating. What confuses me is why a group so disgusted by Manhunt 2‘s content would want to know what had to be left out. Surely it doesn’t matter if it’s not in the game, and if it’s not important, why would such a moral and upstanding group want to view such horrific violence so badly? A little morbid curiosity, maybe?

Gamers with an interest in this whole debacle would do well to keep an eye on CBS tonight as it will provide a detailed look at Manhunt 2‘s long and bloody story. Hey, at least Fox isn’t doing it.

Make sure you stay tuned to CBS, and have a handy Youtube upload ready for those of us on the other side of the sea. It could prove to be quite an interesting end note before the game finally hits stores tomorrow, after the months and months of controversy.

All in preparation for the months of bullsh*t that’s going to come.