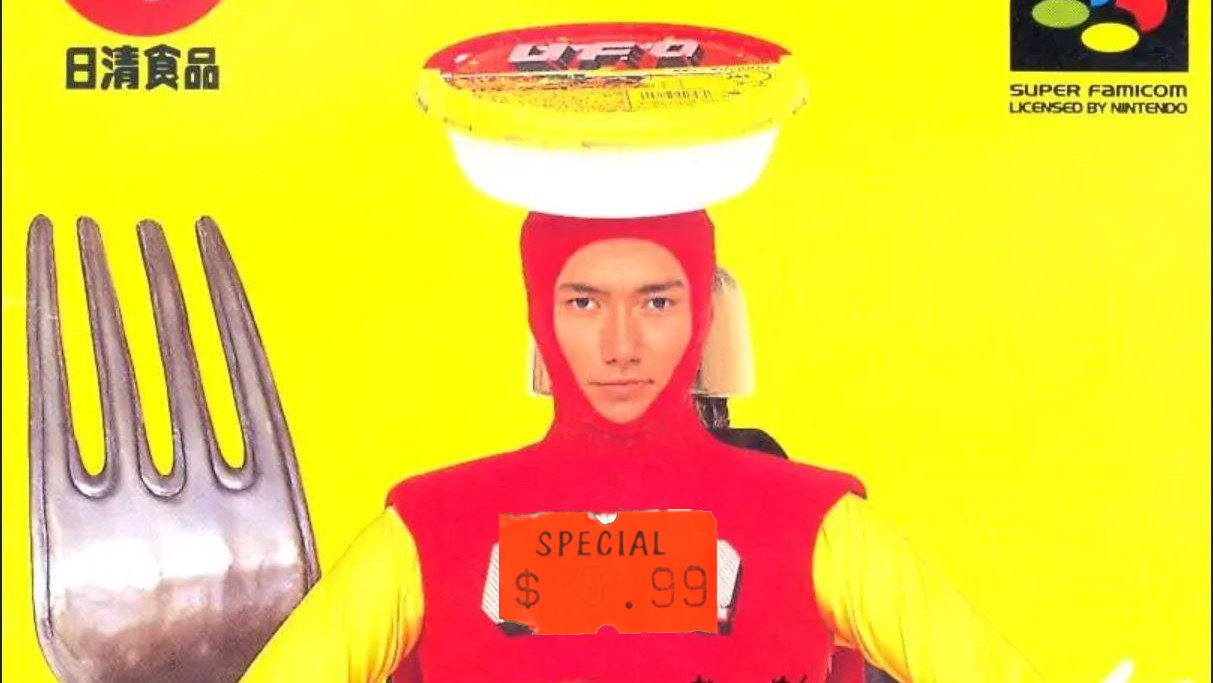 Part of this college breakfast

Popeye was the best thing to ever happen to spinach, and all it had to do was imply that eating a can would let you punch a train. Why did no other vegetable consider this? Children and adults alike would love to be just like their favorite village brawler. Why do processed meat sticks get the Macho Man’s elbow drop of approval but not bok choy?

We should really see more advergames. Let me tell you, I hate advertising. Seeing it in video game form, on the other hand, really lets you appreciate how insipid it is. Cool Spot had nothing to do with 7up, and McDonald’s Treasureland Adventure didn’t have a hamburger in sight. UFO Kamen Yakisoban has it right. It is all about a buckwheat-fueled tokusatsu hero getting all noodly with his prey. Yes! 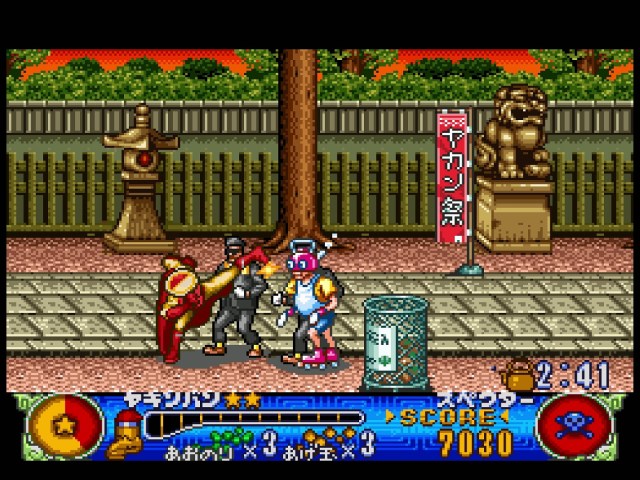 I dream of noodles

The full name is UFO Kamen Yakisoban: Kettler no Kuroi Inbou, which roughly means UFO Mask Yakisoban: Kettler’s Dark Conspiracy. UFO is, of course, a brand of instant noodles made by Nissin. Noodles are something you put in your face, or rather, that I commonly put in my face.

Weird aside: one of the most recurring themes in my dreams is noodles. My brain goes on tangents where I try to find the best noodle places and become fixated on them. Analyze that, Freud.

Anyways, UFO Kamen Yakisoban is a mascot character for the brand. In 1994, he got both this game and a straight-to-video comedy film. Surprisingly – or perhaps unsurprisingly – they are both very dumb in some of the best ways. 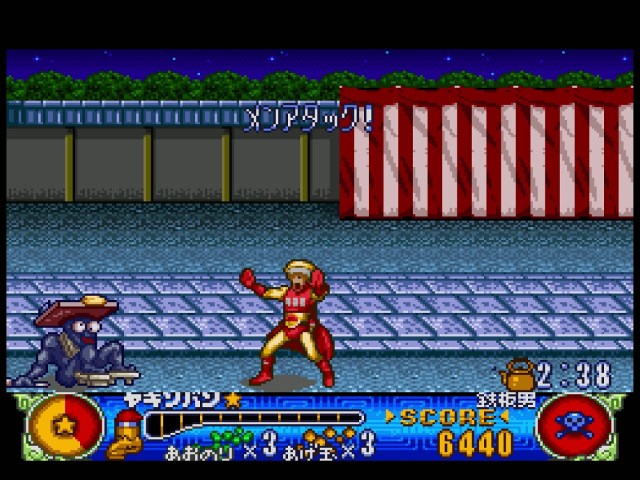 UFO Kamen Yakisoban, perhaps appropriately, plays like what you’d expect from a tokusatsu game. It’s a beat-em-up of the most derivative variety. There’s one attack button, which can be combined with a roll, a jump, or charged for a soy sauce attack. There’s no grab, which I always find disappointing in a brawler. You do have two limited-use special attacks. Just remember to actually use them, because they refill after every death.

The whole game is built around the singular joke of this being an instant-noodle-powered super-hero. At the beginning of each stage, he drives in with his noodle bowl car. The enemies are themed after cuisine. The main plot involves noodle-man trying to stop a princess from marrying the Kettler. I don’t even get that last part, since this particular brand of instant yakisoba has you pour boiling water into the bowl. Shouldn’t UFO Kamen Yakisoban be friends with him?

It at least executes the joke pretty well. It manages to tie in jokes about both tokusatsu and the theme of food. The Kettler brings in a new monster for each stage, and they’re things like a Teppanyaki grill or a bunch of silverware. The special attacks involve using aonori and agedama. I think the whole soy sauce charge attack is the most amusing. You can even grab an upgrade that lets noodle-guy dual-wield soy sauce bottles. A hero for our sodium-addicted youth. 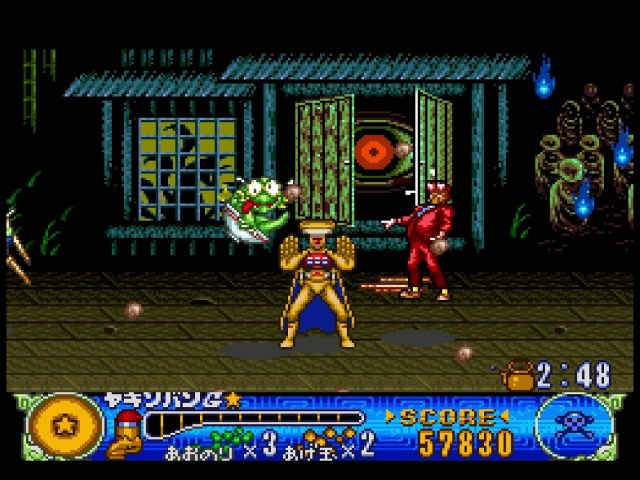 To add to the appeal, the art is really well done. It’s not a graphical showcase or anything, but the bright visuals and detailed animations are really solid. One of my favorite subtle additions is having UFO Kamen Yakisoban power-up after the third level. Rather than just changing the colors of his sprite, some of his actions change as well. The jump kick, for example, is swapped just to have him throw himself bodily at the enemy.

The music also captures the tokusatsu spirit, if nothing else. It sounds like it’s played on a ballpark organ.

It’s a bit short-lived, however. There are five levels in all, and while this builds up to a showdown with the Kettler, it’s a bit of an anti-climax. There’s no giant robot fight, or even the genre-mandated elevator stage. There’s a decent assortment of enemies for its five levels, but it’s not anything mind-blowing. If I can fault UFO Kamen Yakisoban with one thing, it’s that it doesn’t really do much to surprise you. 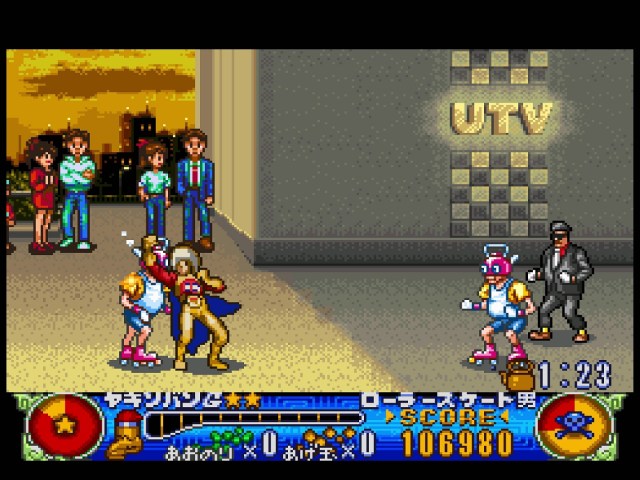 Less nutrition than Streets of Rage

But I can fault UFO Kamen Yakisoban with a bunch of things. Its gameplay is quite shallow to begin with, failing to meet the bar set by games like Streets of Rage. There are only up to three enemies on screen at a time. That might be part of the reason there is no co-op, which is a shame on its own. I would have loved to play as Fried Ramen Girl or something similar.

While you can adjust the difficulty to your liking, there’s a dearth of strategy to the whole affair. It gets decent mileage out of its one attack button, but I am strictly anti-monobutton. Give me a kick, at the very least. Definitely let me grab enemies. Beat-em-ups just aren’t the same when I can’t hug all the enemies before suplexing them into concrete. 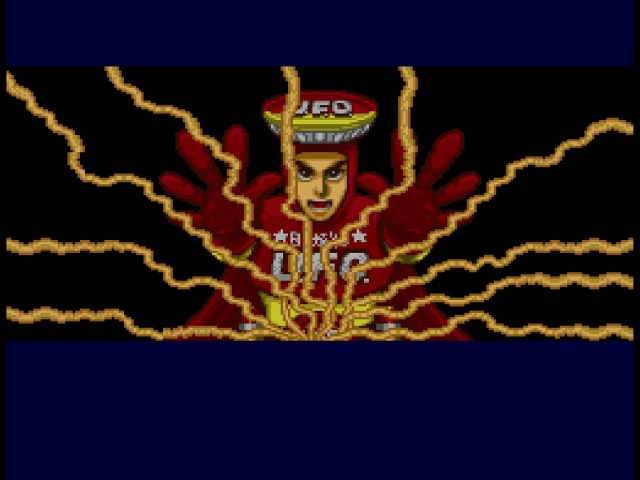 At the same time, I wouldn’t really call UFO Kamen Yakisoban a bad game. It’s sort of in Yo! Noid territory, where it’s just kind of there. You can play it to have advertisements put into your brain. Does it work? I definitely searched for where I could order some UFO Instant Yakisoba while playing this game.

I thought to myself, “Well, this is okay, but I’d probably be incensed if I paid money for it.” Then it hit me that I did. The cartridge came from somewhere. I bought it. Whoops. I guess my intention is that at least I didn’t pay 1994 money for UFO Kamen Yakisoban. Because it’s fun, but not spend-a-month’s-allowance fun. It’s a decent way to spend an afternoon, but don’t expect to be wishing for a sequel. Although, it’s definitely about time.

Honestly, I really wish it had co-op so I could trick people into playing it with me.