So much discomfort sewn into one title

Harvester is a tough one. Some may argue that it’s not kusoge, but it sure looks the part. One man’s trash heap is another’s sacrificial altar, if you know what I mean.

It defies description. It’s plainly distasteful. Made smack in the ‘90s around the epicenter of the industry’s shameful thrashing against censorship. There’s gore, offensive dialogue, and references to sex during a time when video games were largely as sexless as a Ken doll. It was designed to be high concept, the only way that designer Gilbert P. Austin could see it competing with the big industry players.

It’s, uh. I mean, I can’t deny that it has the imagination and artistry of an auteur project, but whether it gets its messages across, is another matter. 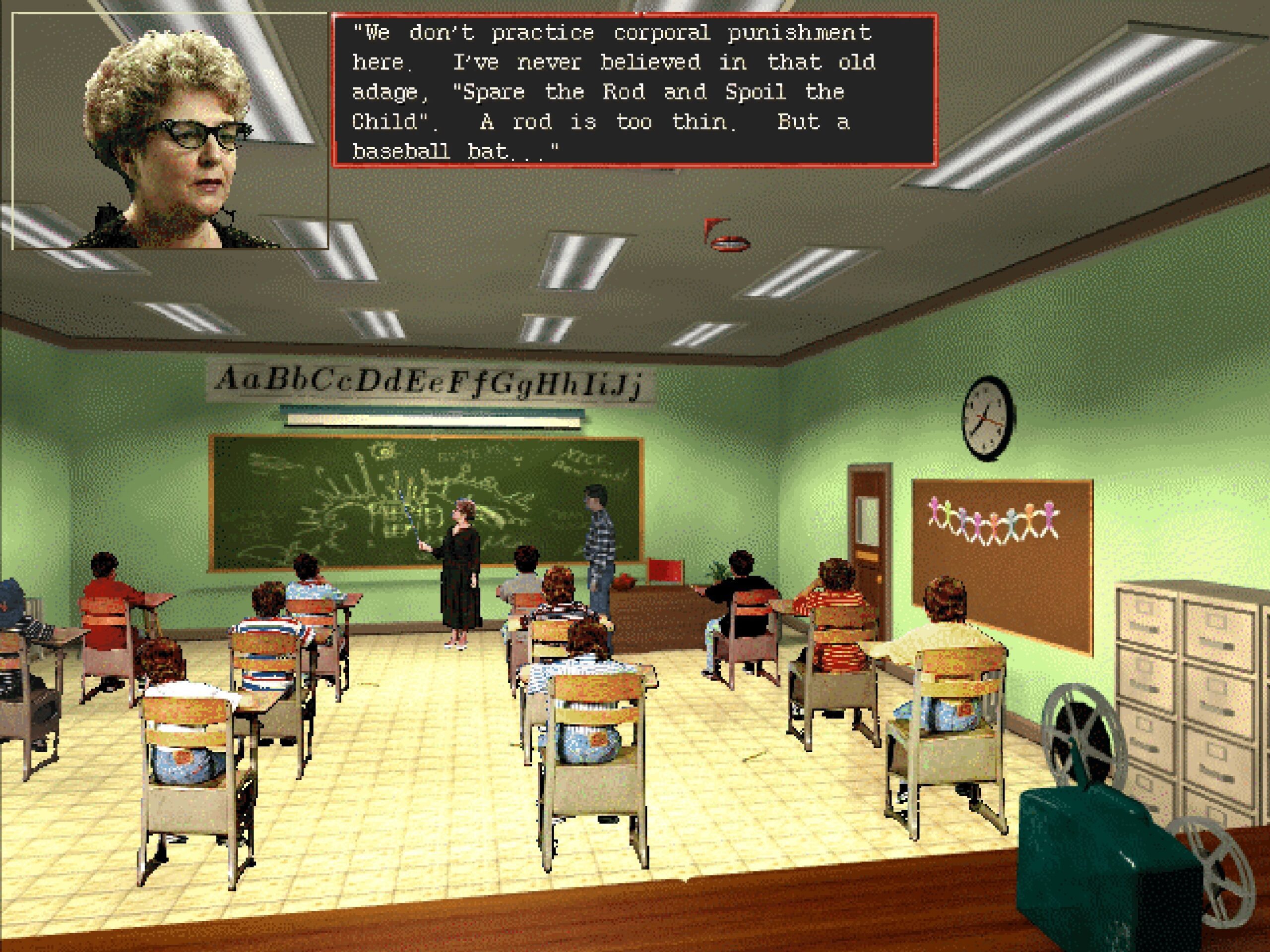 You play as Steve who wakes up in his bed with no memory. Not a single recollection of the people who claim to be his family or the townsfolk who say they’re neighbors. No one seems to believe his lack of memory. After all, he’s always been such a kidder. He quickly learns that he’s the son of a meat plant owner, he’s going to be married soon, and there’s a bake sale on Friday to raise money to pay for the burials of all those homeless drifters who wander into town and die.

It’s easy to see something sinister is going on in Harvester’s twisted version of suburbia. Talking to absolutely anyone reveals they’re cracked in some way. Damaged at best, but hostile and deranged most of the time. There’s a lady who muses about the sexual imagery of wasps. A butcher who serves the town red meat, despite there being no sign of cattle anywhere. Or maybe you’d like to visit the town’s mortician slash hotel manager.

It’s both cartoonish and disturbing. The game’s visuals are a mix of terrible blue screen effects on mid-’90s 3D-generated backgrounds. Like Myst got knocked up by Jason and the Argonauts’ after a night of hard drugs and virgin sacrifice. It’s hard to tell if the unnervingly off-kilter graphics and cutscenes were intentional. Regardless of the artistry on display, they go right along with Harvester’s straight-up insanity. 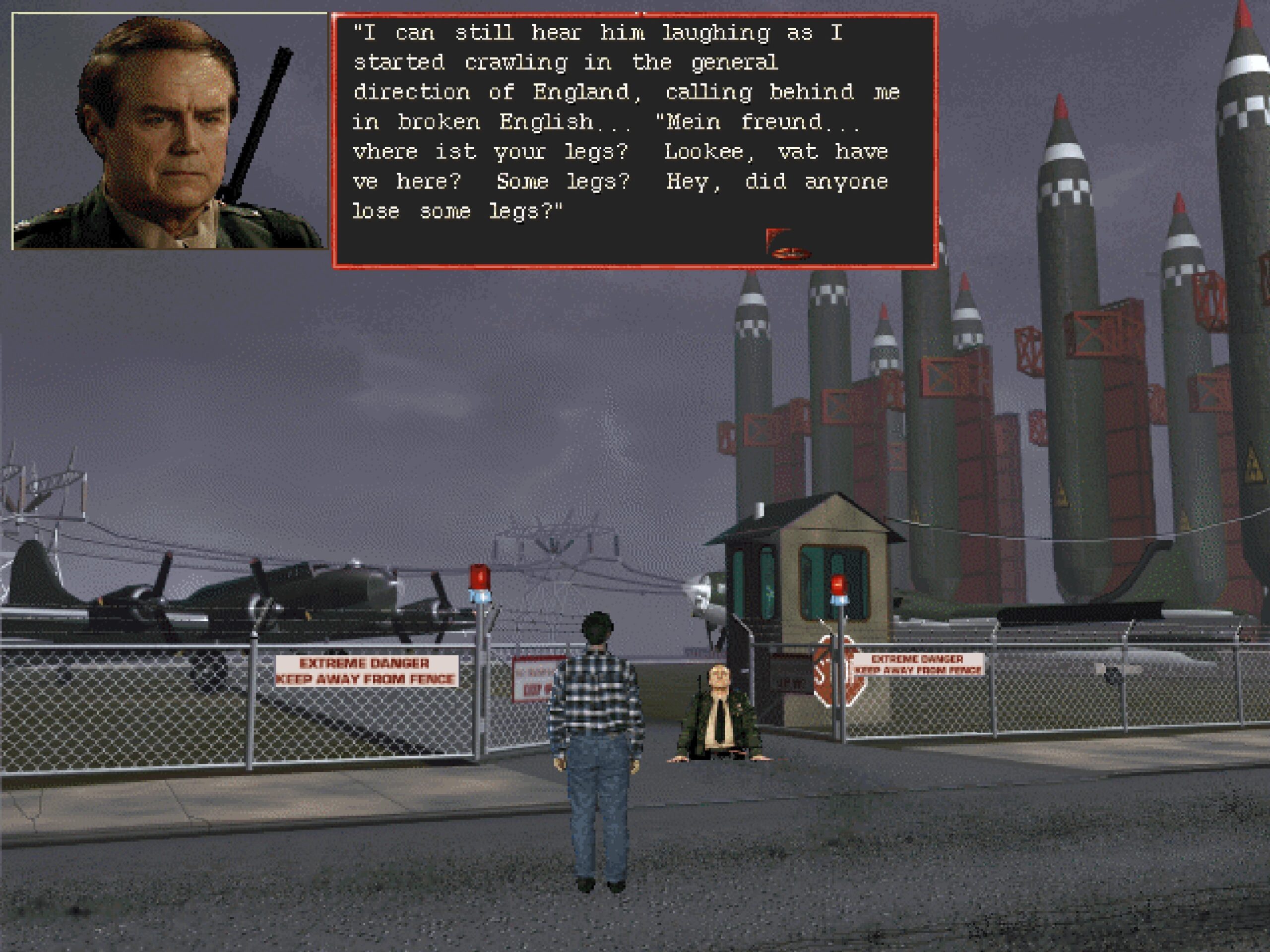 Even the flow of Harvester is peculiar. Your main goal is to get into the Lodge, where apparently you’ll find answers. The Lodge is this horizon dominating building in the center of town, and to join them, you need to complete a series of tasks. Makes sense.

How you manage them isn’t clear. The first one requires you to get the postmaster to give you an application, and you have to unravel his dark secret to do so. You mainly wander the environments and pick up objects whose use isn’t immediately clear. Eventually, night will descend on the town and it’s time to go to work.

The puzzles are awful. I got by okay at the beginning but eventually had to stoop to using a guide to get me through tough spots. It’s simply too easy to miss something in the environment. Some of the puzzles require you to fail to figure out what they require of you. And yeah, you can definitely die in this game. Often suddenly. Often for very little reason. 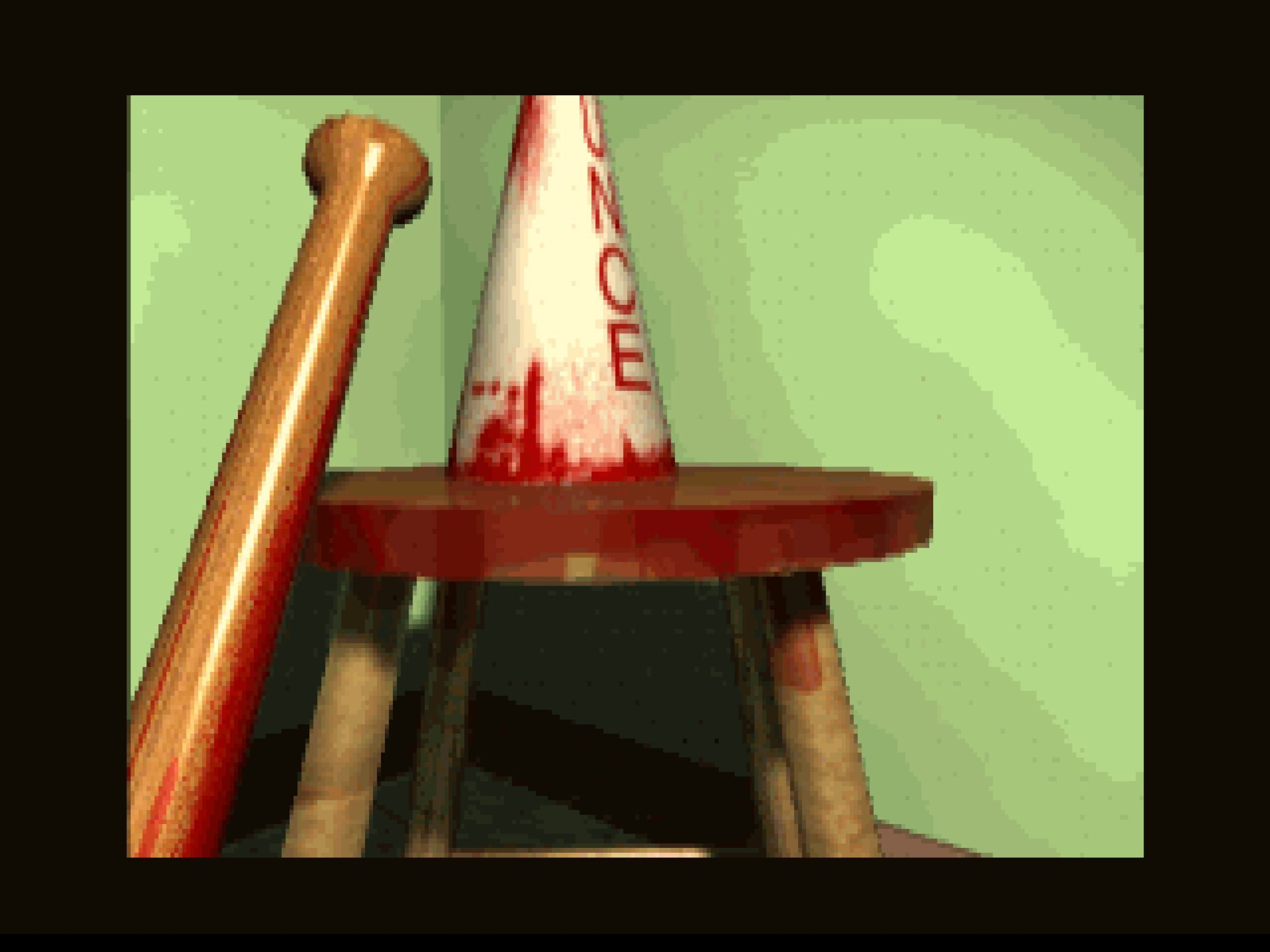 It’s an unsettling game from tits to toes. Everything about it. The dialogue, the graphics, the music, even the ambient sound effects. The buzz of fluorescent lights, distant sirens, gunshots. It feels like you could peel the game off your monitor and find a nest of cockroaches underneath. It’s the video game equivalent of trying to ignore the horrible smell coming from the crawlspace.

The pace of the storytelling heightens this. Even in the early parts where you roam suburbia looking for things to rub against other things, the story gradually becomes darker and darker. Sucker punching people in their vanity gives way to acts with tragic consequences. Yet the citizens of the town continue on their way, perhaps bothered for selfish reasons, but never sorrowful or self-reflective.

Most of the citizens of Harvest are horrible, horrible people. They’re sexist, racist, and homophobic. Like the aesthetic, is discomforting. They’re not supposed to be sympathetic, but it can still be difficult to listen to their slurs and suffer their lack of humanity. Not everyone is going to be able to stomach it, and Harvester is entirely unapologetic and uncompromising. 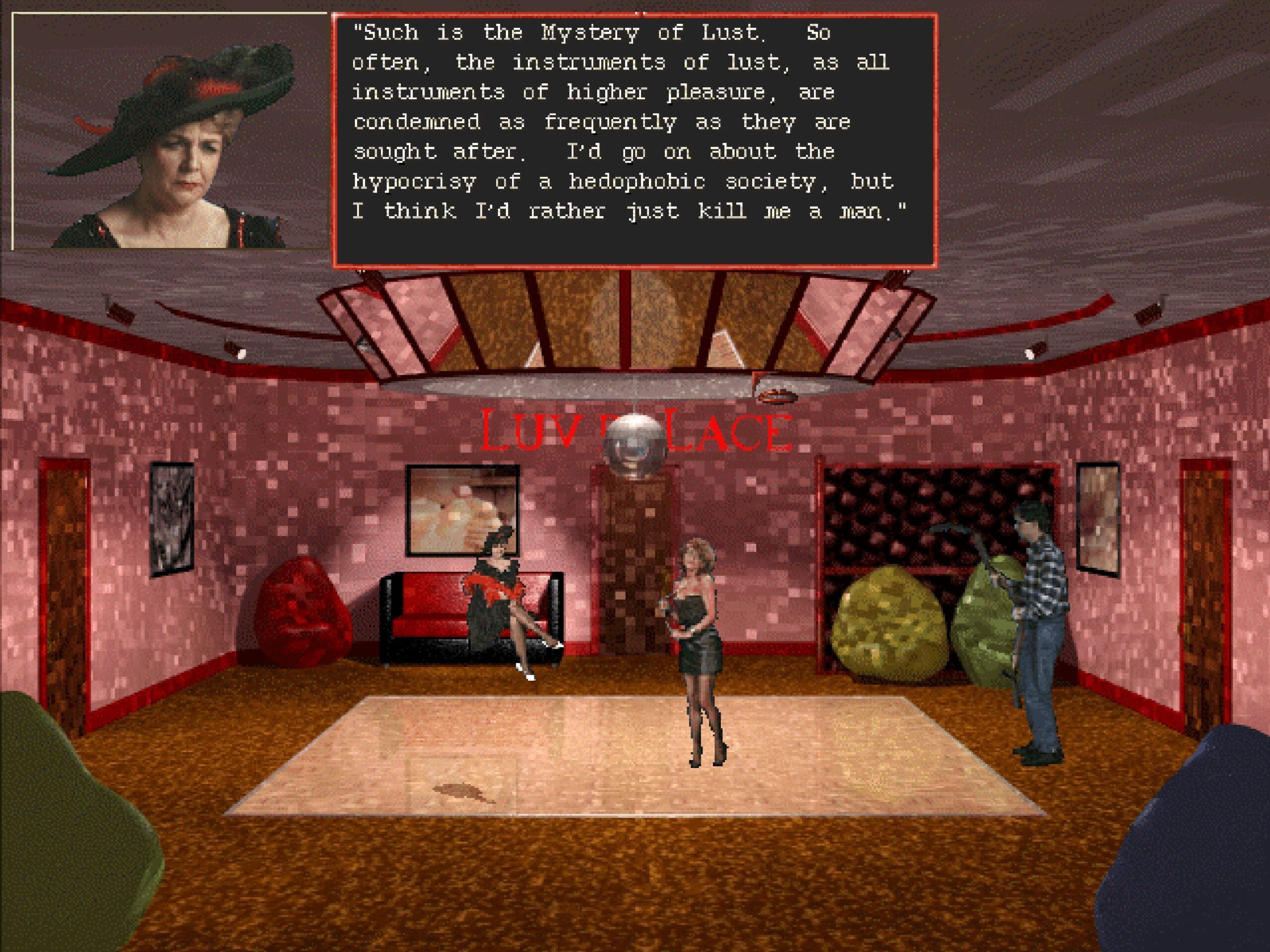 The gameplay is also difficult to stomach. As I mentioned earlier, a guide might be the best way to experience Harvester, and I’m always hesitant to recommend it. It’s just far too easy to miss something buried in the background and find yourself wandering the town on a wild goose chase. It can easily fall to pixel hunting, navigating dialogue for some clue of what to do, and sometimes that clue just isn’t there. The game gives you a clear objective but how to pull it off can be a meandering path through insanity.

The final act of the game could be the breaking point. It’s combat-heavy, and the combat is about as wieldy as a cracked blowtorch. There are certain ways around some of it, but other places require you to throw down and slap fight enemies. 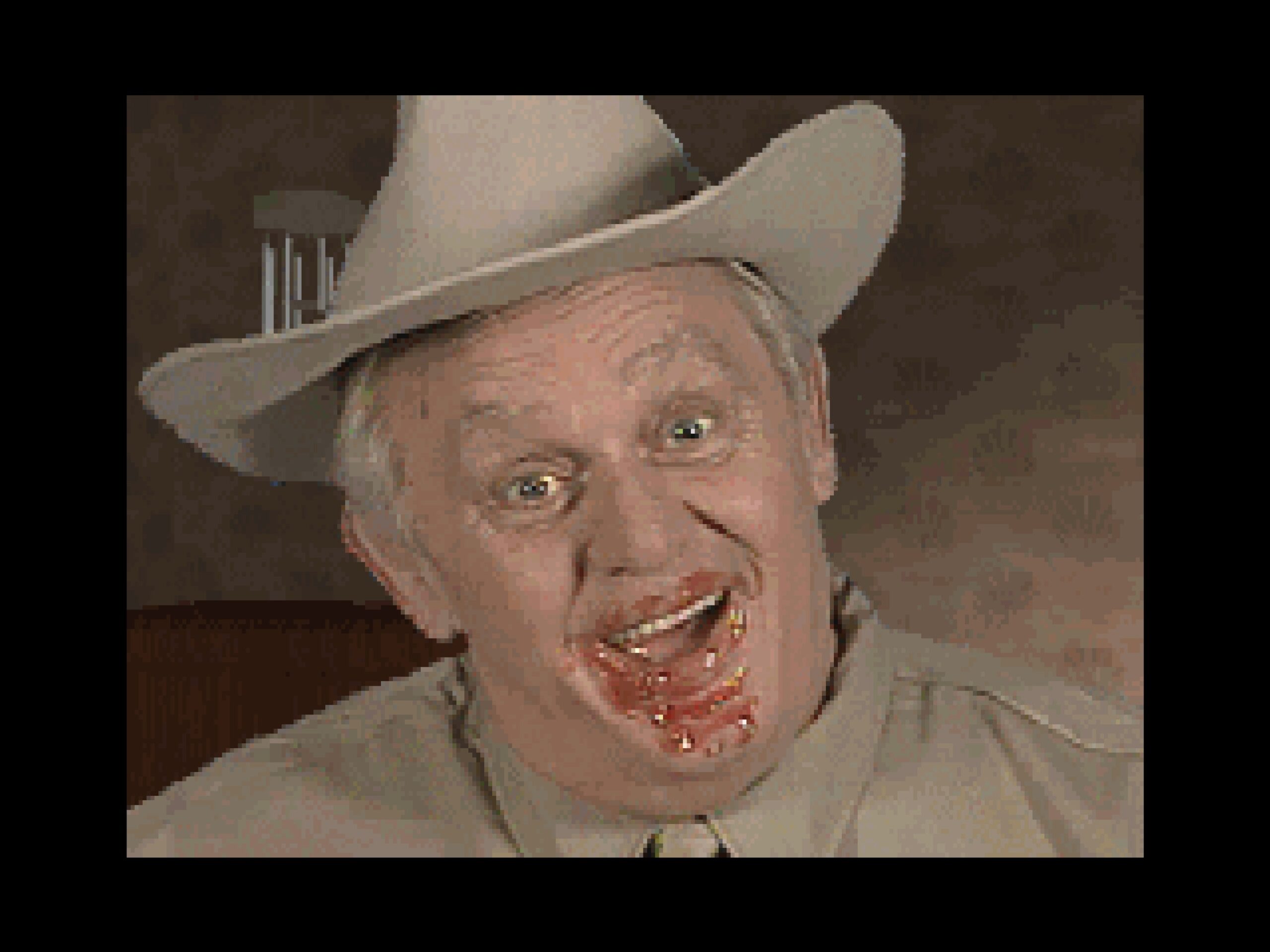 I didn’t really get Harvester’s message at first. It has something to say about violence and its effect on the mind. However, it was very difficult to figure out its vector on the subject. Is it saying that media is pervasively sick or is it saying that violence and gore are benign? What I finally gleaned from it when I reached the ending is that it’s a parody of this fear. It gives a caricature of what the world looks like in the minds of the politicians and lawmakers that feared Mortal Kombat would bring about a wave of youth violence. Someplace wholesome, twisted by dark tendrils that reach up from the earth.

However, there’s the possibility that it goes too far in presenting this. It’s especially quick to put children and infants in harm’s way. It touches on sexual assault, depicts suicide, and has a tendency to drop derogatory phrases. Whether or not the game could communicate its messages and atmosphere without these are debatable, but since there’s no putting the sleeping bag back in its pouch, you just need to be aware of what you’re getting into.

As for whether it’s kusoge, I don’t have a definitive answer for that. If we say that a successful game is one that executes its artistic vision, then I’d say Harvester does that. Tastelessly, tactlessly, unapologetically; it gets its point across. If you get past all its rough spots — and there are many of them — you’ll find a game that’s utterly unique in the most nauseating way possible. It’s up to you whether it belongs on a podium or needs to be flushed down the toilet.