For here or to go?

I’ll bet you have a few childhood video games that you look back on and think, “What in my sugar-addled mind convinced me that was good?” Fortunately, I don’t have many of those, or maybe I’m just in denial. San Francisco Rush was really that good, right?

Oh, but there are some. ClayFighter Sculptor’s Cut, for example. I know what you’re thinking, surely I mean ClayFighter 63 ⅓, right? No. I played that when I was a kid, but I never owned it. Sculptor’s Cut, however, I snatched up from Blockbuster as they were liquidating some of their old games. In hindsight, smart move, kid. The game goes for astronomical prices these days, but it’s important to remember: just because it’s an expensive game doesn’t make it a good one. 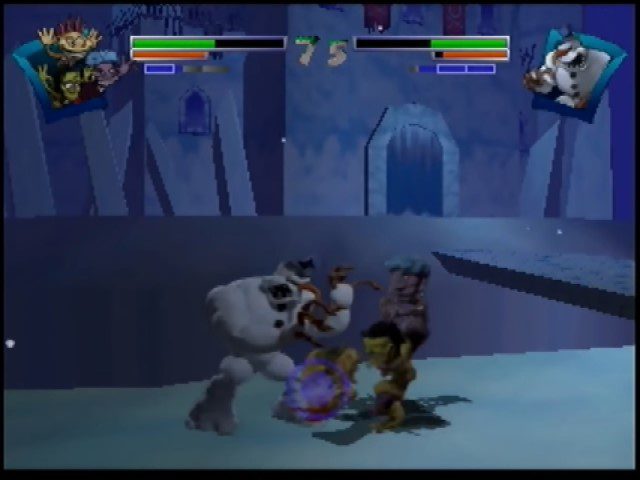 If you don’t know what I’m talking about ClayFighter 63 ⅓ was the third core entry in the ClayFighter series and the first one on the N64. It wasn’t well received. Among other complaints, some of the fighters that were advertised straight up to release weren’t even in it. Lady Liberty, Hobocop, Zappa Yow Yow Boyz, Lockjaw, and High Five. Plus, the camera sucked, the animation was choppy, and it was just generally lackluster. That’s putting it charitably.

Sculptor’s Cut was a special follow-up edition that reimplemented the removed characters and made a few smaller fixes. Except for Hobocop, but we’ll get to why he isn’t in there. There’s even a neat theme song to kick things off, and honestly, it’s the best thing about the game. 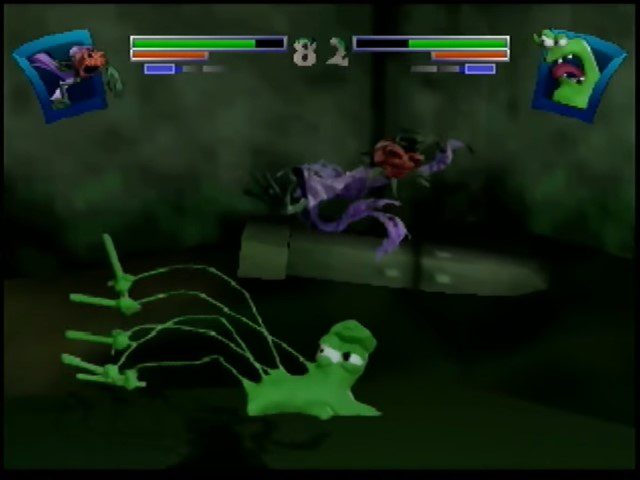 While I’m not a stranger to the genre, I feel as though I need to disclose that I’m not really a fighting game professional. I know my quarter-circles and charge moves, but I couldn’t tell you about hitboxes or frames. I can string a combo together, but then I usually forget it when I inevitably move onto the next game.

With that in mind, I can still tell you that the N64’s ClayFighter games are garbage. They’re slow, clunky, and gluey. Part of the issue is the animation is junk. Some of the attacks seem to be missing entire frames of animations, others you could barely call animated. The movement for a projectile might look exactly like a close-range attack, so the tells are all over the place.

Clayfighter Sculptor’s Cut plays like a budget mash of multiple games in the genre. The one it seems to ape the hardest is Killer Instinct, with its obnoxious announcer that shouts out names based on how many consecutive hits you score. “Triple brown betty combo,” “Little Girly Combo,” and many others. The fact that it invites comparison to these games is a little embarrassing. It at least doesn’t have the gall to make fun of other contemporaries — just reference them. That probably would have been agony to witness. 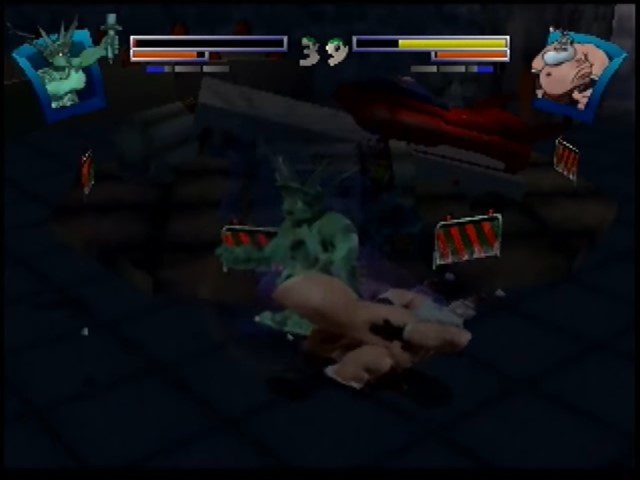 ClayFighter’s humor is already difficult enough to stomach. Back in the day, I’d swear it was the funniest thing stamped onto silicon. I would go as far as quoting it, as humiliating as it is to think about now, but now I see it as it is; not just juvenile, but offensive.

Sure, when I was 10, I can see myself thinking a half-naked, exaggeratedly obese Santa Claus named Sumo Santa was funny. When he… sits on… oh, gosh… I can’t. Okay. The Claytality where he sits on his opponent then… expels them out of his… out of his butt as a series of gibs accompanied by a fart noise. That might have been… no. Oh, goodness, this is the level of humor in the game. Boogerman makes a cameo in Sculptor’s Cut as a fighter, and he fits right in, I guess. 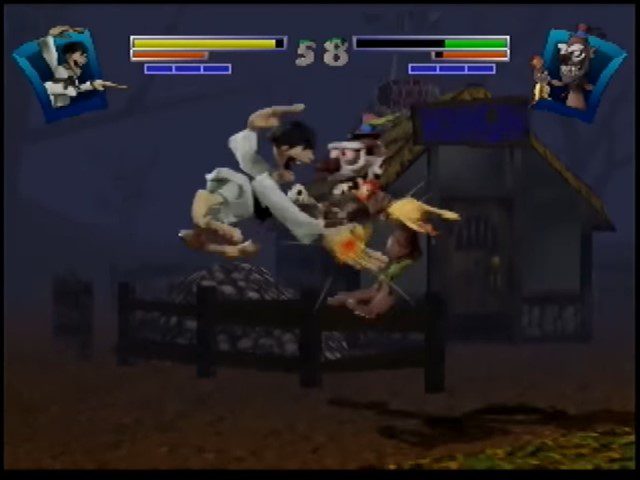 It gets worse, however, when ClayFighter brings out the obvious racism. I mean, we can point to the Zappa Yow Yow Boyz and Houngan as insensitive to indigenous cultures and African diaspora religions, but it’s debatable. I guess. Not really, but it’s maybe more excusable than Kung Pow.

Ah, yes, Kung Pow. The parody of Bruce Lee crossed with a horribly offensive stereotype of a Chinese chef. His moves are all named after American-Chinese dishes and he spouts them out with a faked accent that would make Mickey Rooney blush. His voice was done by Jeff Bennett in what has to be one of the lowest points in his career as a voice actor. This guy was Johnny Bravo. He probably voiced someone in your favorite cartoon. Here he is mixing his Ls with Rs.

The sad fact is that the voice cast in Sculptor’s Cut is amazing. On top of Jeff Bennett, there are people like Jim Cummings, Rob Paulsen, Frank Welker, Tress MacNeille, and Dan Castellaneta. That’s all your Saturday Morning cartoons, right there. It’s unfortunate. There oughta be a law against this sort of abuse of talent.

What’s really amusing is that Hobocop was apparently given the ax by Nintendo, who saw the character as insensitive to homeless people. This is probably true since he was depicted as drunk and disheveled. But then we have Kung Pow, and I’d like an explanation. Like a derelict who has been empowered to fight evil isn’t allowed, but an Asian caricature straight out of a ‘40s Popeye cartoon is a-okay? Where’s the line here? 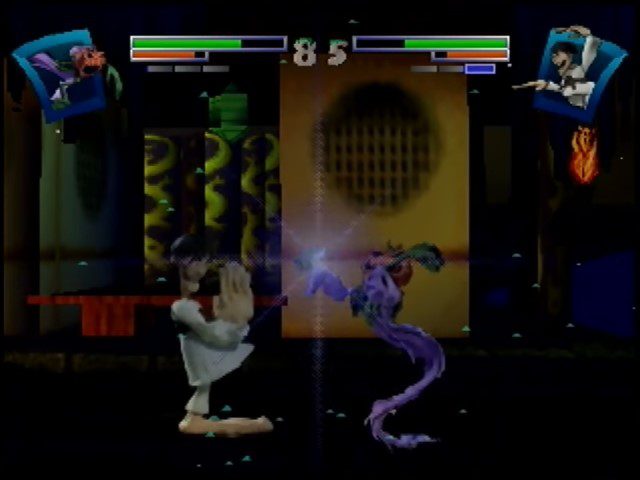 The “Claytalities” — an obvious play on Mortal Kombat’s Fatalities — are pointless and horrible. Most of them just involve the victim spilling a lot of gibs. Others have them stretching or deflating. There’s the odd worthwhile one, but it’s rare.

To be fair, Mortal Kombat worked off the concept that most characters are physiologically similar. They probably have a head, a heart, and a spine — everything you need for a gruesome finisher. In ClayFighter, they can be a disembodied hand, a blob, or three dudes at once, so you can’t just assume they have a spine you can tear out. Still, it would have been less eye-roll-inducing if they left Klaytalities out altogether or, y’know, came up with an actual original idea. That might be asking a lot. 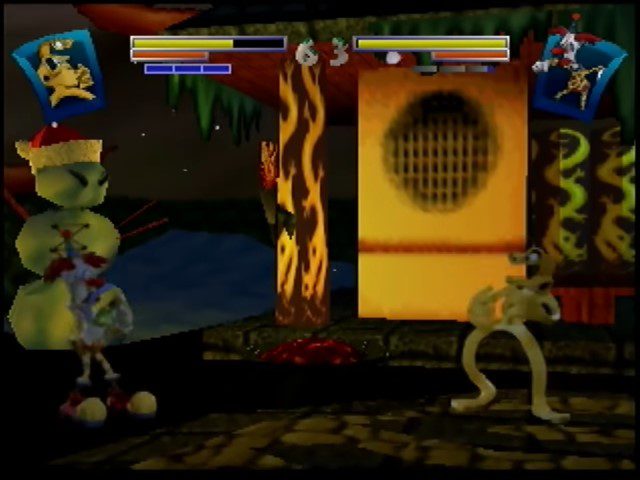 Clayfighter Sculptor’s Cut may not be the worst fighting game. It may not even be the worst fighting game on the N64. But if any N64 game was going to breach the $1k mark on the collector’s market, it shouldn’t be this one. Why not Razor Freestyle Scooter? It was a Blockbuster exclusive, and it didn’t make me want to cringe myself inside out. It was awful, but that doesn’t seem to have impacted the value of Clayfighter Sculptor’s Cut.

Otherwise, ClayFighter Sculptor’s Cut belongs in the same dumpster as other failed fighting games, which is already piled pretty high. Still, I don’t regret latching onto it as a child. Reflections of my bad taste are part of my growth in the hobby, just as worthwhile as those times I got it right. Plus, I’m not so proud that I can’t look back and say, “children are stupid, and I was no exception.”