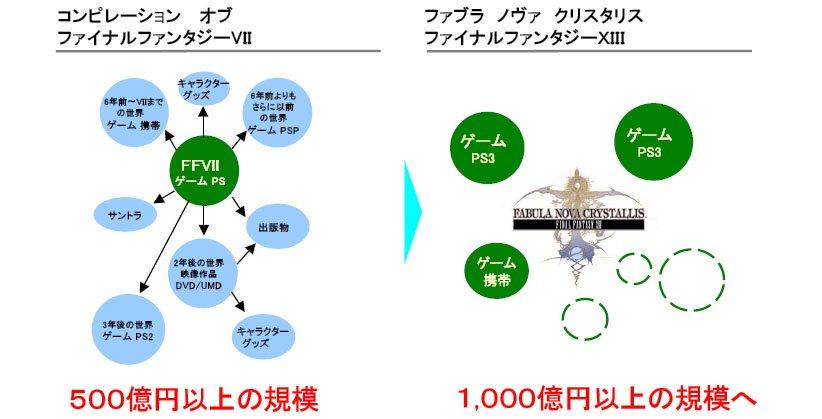 Square Enix’s announcement of yet another Final Fantasy game a few weeks ago has the interwebs abuzz, lauding the publisher’s ability to both take their franchises in exciting new directions and milk them for all their worth. Which is a lot. The possibility of Microsoft getting its hands on the piece of the pie isn’t doing much to stem the tide of speculation.

Very rarely does change go over well, especially concerning a beloved videogame franchise that has spanned almost two decades. Arguments and criticisms have been tossed all over forums, blogs, and the Internet in general — some of it positive, some negative, some of it constructive and rational, some not.

So, what do the writers of Destructoid think about Square Enix’s multi-platform method? Our opinions are just as varied as everyone else’s, so hit the jump to see what DMV, Kokomo, Husgush, and I think.

Releasing stuff like Final Fantasy Tactics as it’s own series would’ve allowed the game to go in a more creative direction than be restricted by the trappings of Final Fantasy. Tactics had a lot that they could’ve done outside of the typical FF world, and they weren’t able to. If it had been its own series, I think Square Enix would’ve been able to put out a tactics RPG and have a new series that they could work with.

Square Enix really needs to work towards creating new series and not putting everything in their Final Fantasy basket.

I want to argue that Final Fantasy games just don’t feel like Final Fantasy games anymore. With all this saturation they are dangling close to looking like every other Japanese R.G. out there. The production values are as high as ever, but these advances in technology are replacing the classic moments and classic characters that make Final Fantasy, well, Final Fantasy. Remember the opera scene in Final Fantasy VI? Or when Palom and Porom turned themselves to stone in IV? I will take these moments over any of the highly detailed, pre-rendered cut-scenes of the last decade or so.

Even the characters are starting to blur together and are becoming almost interchangeable. I love you Balthier, but you are no Setzer. Tidus? Not even close to Cloud. And don’t even get me started on X-2. When there were years between Final Fantasy games, it seemed the creators put a lot more heart (and personality!) into the final products. Hell, the hype alone would always make a new Final Fantasy game something special. Now it just seems like there is a new one every couple of months and everything is starting to feel so, * sigh*, generic. And that makes me sad.

With Square’s history of putting an emphasis on storyline, it may not be such a terrible thing to have some titles branch out into other projects. Some games have had such fascinating and/or complicated plots that they might deserve another chapter just to explain themselves. The perfect example of this is Final Fantasy VII.

Having spawned a movie, two books, a PS2 game, a cellphone game and an upcoming PSP title, FFVII is the poster child for the Square-Enix dairy farm. Is that so bad, though? If you loved the game as much as I did, you might be interested to hear the rest of tale, wherever it comes from. I loved Advent Children and I thought it was great to see what the crew had been up to since Meteor ruined everyone’s day. If it’s done right, sequels and expansions can add to a story and enrich it without insulting it.

Dirge of Cerberus, on the other hand, is guilty of insulting it and shows us what a sequel should not be.

It’s a fine line, and one that many fans would rather Sqaure didn’t walk. Some games have become more than just stories in the hearts and minds of gamers, and it can be dangerous to tread on sacred ground. Some things are better left alone, and maybe it’s just an easy way to squeeze a few more gil out of a popular title, but if there might be a little more to a story you love, wouldn’t you want to hear it? If it’s told by the right people, I sure would, and who tells a better story than Square?

I’ll admit — I’m a Final Fantasy fanboy. There. I said it. That even applies to X-2, which I firmly believe has redeemable qualities.

That being said, it’s no surprise that I think that Square Enix is going in a positive direction with their multi-platform design. At its core, this new system will make it easy for fans of the series to get their hands on as many iterations as they want, on their console of choice. I remember when I bought a Playstation to play Final Fantasy VII, and for that reason alone. Luckily, it paid off and was an excellent investment.

Fast forward 10 years and, as of now, the only way to play Final Fantasy XIII is by dropping 600 bones on a PS3. Will it be worth it? Who knows — in the mean time, check out what else Squeenix has to offer.

The obvious objection is that this will dilute the franchise, but I’m optimisitic. Crisis Core, the Lion War, and Revenant Wings all look very promising, and I won’t pass judgment on Tactics Advance 2 or Ring of Fates until we know a little more about them. Granted, Dirge of Cerberus, was a dismal failure, but it was a shooter. When SE sticks to RPGs, they turn out wonderfully. Furthermore, Final Fantasy XIII was designed, from the ground up, to have games on different platforms — it’s not like they’re making it up as they go along. And with a varied team (including the Kingdom Hearts guys) involved in the project, rest assured that we won’t be seeing more of the same.

Well, dear readers, what do you think? Pick us apart, call us fanboys, point out our short comings! Do you object to our opinions? If so, on what grounds? Give us something to work with, and we’ll reply next week, all Phoenix Wright style!