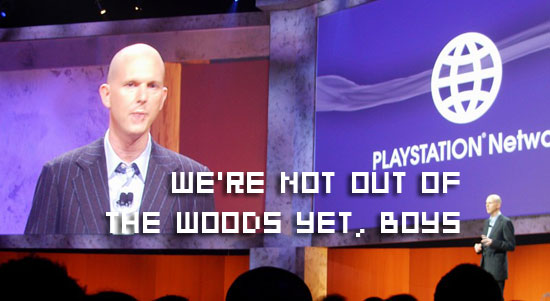 So, this week we’ve seen a ton of news come out from Sony. Early on, we got the announcement that they’ll be cutting the price on the PS3 60GB model by $100, sending the sales of the system shooting up. Next, at E3, we also got the announcement of the PSP redesign, along with a reconfirmation of Metal Gear Solid 4 as a PS3 exclusive. Sony had some great announcements coming out of the gate.

And then it all went to Hell. People have been less than thrilled with the fact that Sony is going to be dropping the 60GB model of the PS3 in favor of the 80GB, which will keep the console at a price point of $599.99, a good $120 away from the Xbox 360 Elite, which will likely drop in price once the 65nm chips make their way into the system.

So, what is the Japanese behemoth to do? “Roll over and die” is what I’m sure a bunch of you would love to say, but that really isn’t an option right now. So, let’s take a look this week to see what Sony can do to keep themselves from being just another set of 4chan memes from now until the end of the console’s life.

Let’s begin with the announcement of Sony discontinuing the 60GB PS3. The price cut has lit a spark that will allow more of these units to be sold and eventually cleared off of the shelves. There has got to be a fairly large stockpile of units sitting around to at least push Sony into the 5.5 million units sold area.

I think that by the time the 60GB models are sold out, Sony will have made enough improvements in the technology within the console to be able to cut the price on that down to $500. This is my hope, though. If Sony came out now and said this is their expectation, it would be their best bet of damage control. In the end, they are going back to what they promised — one SKU (search your feelings…you know it to be true!).

Sony also needs to justify the larger HDD. I mean, using it as media center is the obvious thing, but really, there needs to be an increase in games available for download on the PlayStation Network. From browsing the list on Sony’s website, all I’d want to download would be Calling All Cars, Rampart, and flOw. There’s a smattering of PS1 games on there that I’d consider downloading if I didn’t get the original discs for really cheap at Gamestop.

Improving their online store is another move that they really need to make. For us here at Destructoid, we never know when Sony releases something on the PSN. That really needs to change. Putting out weekly releases is something the other two companies do, and it really helps build awareness as to what’s coming out. If nothing else, SCEA should have a bunch of its staff working on putting out their first party games from the PS1 onto the system. Online games don’t sell consoles, but it certainly provides Sony with a secondary market to make money that can go to help boost their overall sales numbers and recoup some of that R&D loss.

Next is the PSP redesign. For a lot of people that I know (myself included), they’ve been waiting for a redesigned PSP before getting one. Now, Sony just needs to come up with a smart, simplistic, and straightforward advertising campaign in order to remind people that there’s a newer, sexier PSP coming out. It certainly won’t push the PSP right up into immediate competition with the DS, but it will certainly help. I mean, as it is, over 22 million PSPs have been sold. A strong push could possibly put the system at 30 million sold.

Just as an aside, I feel I should mention that the PSP and DS, in my mind, have never really been in direct competition, and that they will be able to happily co-exist. They really serve two different markets, and at this point, with well-made titles from companies like Rockstar and Square-Enix on the system, the PSP has shown itself as a viable platform that should be taken seriously.

A lot of people have said that Sony needs to be open to accepting homebrew in order to win over a lot of people. Ron mentioned on Podtoid that not many of those who own PSPs know about homebrew, so I think this is a vocal minority who are pushing for this. I’m very much in the “don’t pirate games!” group, and I’d rather buy a Japanese PS2 than buy a Swap Disc, simply to prevent myself from just burning games and playing those. If Sony did embrace homebrew, it would be nice to see some development tools come out so people can start creating simple games to download for the system and play, a la XNA. At this point, really, the PSP just needs a couple more games that are “must buys,” and they’ll be just fine.

Sony’s lineup at E3 really showed some strong titles, but again, those are all for sometime in 2008. We really won’t be seeing many must-buy Sony titles coming out too soon, and that’s their greatest weakness. There won’t be anything to push the console around Christmas time, and so Sony might lose out on yet another Christmas worth of sales.

Sony has more promising points coming out of E3, especially with things like the Unreal 3 engine being custom-built for the PS3, and are poised to reclaim their honor from their debacle of a launch. With the later PS3 controllers to include rumble, what else do you think Sony needs to do in order to win over the masses? Or, have they done enough for right now to secure themselves a successful future with the PS3?