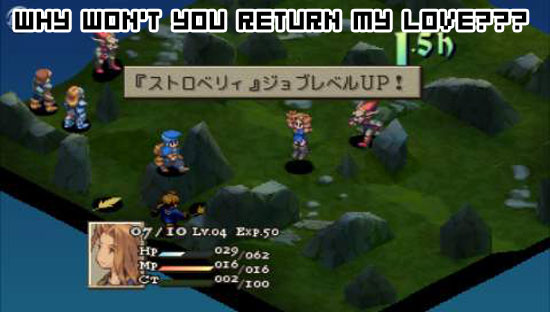 I’ve found myself cursing at the members of my party in Final Fantasy Tactics and Disgaea from time to time. I’ll chastise the characters for not hitting their targets, or dealing less damage than I wanted them to. Alternatively, I’ll praise the characters when they manage to pull through in a time of great distress. Really, it’s not all that strange when you do it, but when you try to tell others about it, it just seems strange.

Why? Well, because you’re not even talking about the main characters of the game. It’ll usually be about those randomly generated party members that you’ll have since the beginning of the game, or will pick up as time goes by. They never have a speaking role in any of the dialogues. They don’t give you any sort of feedback in terms of emotion. They just do the actions that you tell them to with an unchanging face.

“Bullsh*t! I never do that sort of gay stuff!” If this is what’s running through your head, then I’d like to say you’re wrong. 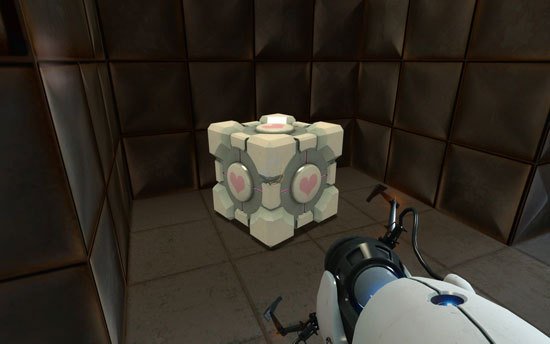 I think the example that will touch on most all of us is Portal. Raise your hand if you felt any iota of remorse for throwing the weighted companion cube into the furnace. See, when I got around to playing Portal a few months after its release (blame the delay on the PS3 version), I was well aware of how the entirety of the level would play out, including the whole emotional pull that was supposed to happen to me. As I played through the level, I even told myself not to pay any heed to my emotions, and just toss the cube in the fire and head on.

But, you know what happened. Once I got to the fire, I tried to find a way around it. I wanted to save the companion cube. It was just a weighted cube that was nothing more than a tool for me to complete puzzles with. Yet, for some strange reason, I didn’t want to waste this companion cube. Just like the nameless redshirts that made up my party in Disgaea, I felt love towards an inanimate object — something that would never return my feelings.

How does this come to be? It’s really thanks to the environment around the situation, and our own personal investment in the game. With Portal, the constant reminders from GLaDOS gave a reason to even think about the companion cube as more than a simple metal block, and I suppose that my increasing distrust of GLaDOS instinctively made me feel closer towards the companion cube. 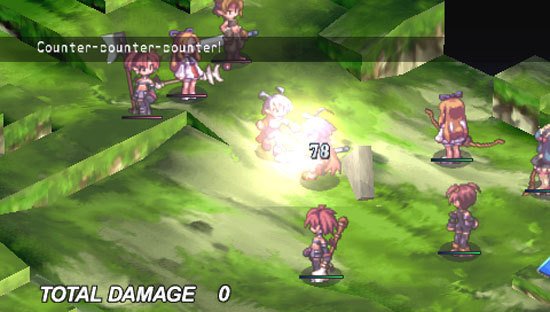 Going back to my Disgaea gang, the party I’ve been working with has formed their own tactics, story, and personalities, solely through random battles. They’ve become familiar faces to me, and I treat them as carefully, if not more so than my main characters. At the same time, any new characters that are introduced, or if I have to create a character to fufill a specific role, then I treat them as a basic object, and nothing more than a tool to get from point A to B. Just like the character were a weighted companion cube.

Sure, at this point, I sound like a creepy freak who writes fanfiction in his mother’s basement, but I assure you, that position goes to God Len. Instead, take a look at how this technique is used in cinema. While you can’t have a character that does absolutely nothing other than pre-programmed actions, you can have characters with very little personality themselves. In Kurosawa’s post-war noir Stray Dog, the main character, Murakami, is relatively flat. We don’t know much about who he is, and we only pick up small details about his life. Yet, the film turns him into a full character by constantly giving the audience information about Yasu, the main antagonist of the film — who we don’t see until the very end. All throughout the film, Murakami compares himself to Yasu, saying how he could have ended up like that, or how he is different from Yasu. The character is defined by those around him, not his own in-born personality.

Now, to go back to that feeling of exclusionism that I mentioned before. As the game progresses and I continue to build up characters, the likelihood of new characters sticking becomes slimmer and slimmer. At the beginning of the game, the party is still forming itself, so new characters, both pre-made NPCs and random characters are welcome. Once I’ve gotten to the point where the party does everything I need it to, new members become a waste, because they affect the whole party dynamic, creating an imbalance in certain areas, and ultimately creating some redundancy that I don’t need. So, they get shunned out.

This doesn’t happen every single time for me, though. When I played through Final Fantasy Tactics for the first time, and similarly with Hoshigami, I didn’t get attached to the characters because I was playing the game for completion and to absorb the plot. I wasn’t playing through the game to enjoy it — I wanted to complete it as quickly as possible, so I could move on to consuming other games. On my first playthrough, I would gladly switch out characters that I had spent hours on for a new NPC that joined my party, because they were statistically better. Once I sat down and played Tactics again, I was focused on the characters, and understanding the nuances of the plot. I rejected more and more of the NPCs as I played through, because I had become attached to my party.

It’s kind of silly to get this emotional and protective over a bunch of characters in a game, isn’t it? I think this just speaks to the power of videogames as an artistic medium, where it can have that much of a sway on your emotions. Readers, how do you feel towards the characters in the games you play?