Let every man, woman, and child know of the threat of casual games. They’re infecting our schools and our consoles! Children sit in between classes and play Cooking Mama and Phoenix Wright. Pretty soon, our children will be betraying us by spending time playing those despicable casual games and leave the purity that encompasses games like Gears of War and Grand Theft Auto: San Andreas.

Or at least, this is how some gamers react to the mere mention of casual games. After the Planet Puzzle League review, my brief foray into the world of the American Podtoid (not to be confused with the highly-efficient and robotic Podtoid-san), as well as the Pac–Man World Championship, I figured it was high time to tackle this whole issue.

Recently, casual games have been getting more and more popular. I mean, that’s been the key to the Wii’s success, and a big part of the DS’ as well. Games like Wario Ware, Hotel Dusk, and Big Brain Academy have all been huge successes recently for consoles (not to mention stuff like Bejeweled on PCs). Also, there are the classic games like Pac-Man and Tetris that are casual.

So, what’s so bad about them? Over on Podtoid, I got to report on the Pac-Man World Championship, and I refused to leave, so I stayed on for reader questions. On it, one was fielded to us about the rising waves of casual games, and would it take over the market, since it requires less effort to make these games and thus a greater profit margin. Simply put: no. The video game industry is very much like Hollywood: sure, there will be tons of titles put out that are meant to make money, as the Madden franchise and countless movie to video game titles have proven. Yet for all the Disturbia and The Last Holiday that gets put out, there are films like Grindhouse and The Departed to show us what the magic of Hollywood really is.

Now that my film analogy is over, my point is this: casual games may become a significant force in the market, but they will never take over. Sports games won’t appeal to soccer moms — they’ll only target those who have a vested interest in professional sports, but they’ll still remain the highest selling games every year. Casual games aren’t successful solely because soccer moms and grandpas are buying the games and systems. No, it’s because these games appeal to most every time of hardcore gamer. 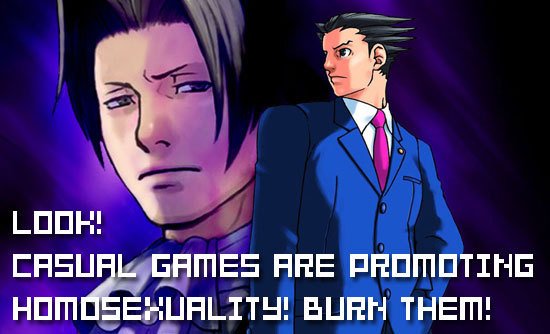 I love Phoenix Wright to death. It’s clearly a casual game (games that require no real knowledge or familiarity with video games to enjoy), and I’m a hardcore gamer. At the same time, some of the people at the Pac-Man World Championship who only play Pac-Man, and don’t play any other video games. Now, while it’s a casual game, they are playing it in a hardcore manner. You’ll also find players who play games like Gears of War once in a while — in other words, casually. So, since we’ve got all these different ways of playing games, is there really that much of an “us” or “them” division? I’d like to think not. Sure, there are groups, but they clearly intermingle with each other.

So, why is it that hardcore gamers are reacting like this? One possibility is it’s the fear that gaming will become totally misunderstood, and they’ll have to fight off yet another stereotype. Another is that they’ll then have to deal with annoying casual gamers bugging them and demeaning what it is to be a “gamer.” Y’know, like when your little sister tries to get into gaming and only bugs the hell out of you with it?

The players at the Pac-Man World Championship were all really interesting people — only a few of them were hardcore gamers, but for the most part, they just enjoyed competing in games of Pac-Man. They’re not self-conscious about what their status is as a gamer, nor what sort of damage their playing casual games does to the market. They are just there to play video games and enjoy them — something that I’ve seen some gamers forget how to do.

All in all, I think it’s pretty ridiculous. The fear that casual games will replace the market of good hardcore games is entirely unfounded. The same amount of great games will be made every year, it’s just that the overall pool will increase. Ubisoft isn’t going to give up making Splinter Cell games just to make more Dolphinz games (which, by the way, Chad Concelmo will be reviewing when it comes out) — they’ll make both, and increase their profits even more.

So gamers, please, don’t fret — your blood-splattering, zombie-chansawing, hardcore games will still be around as long as consoles are being made. Stop making such a fuss over a category of games that’s different from yours. There are probably several casual games that you’d like if you only gave them a chance. There really doesn’t need to be any hostility towards those who only game casually (and trust me, I’ve seen it happen before), since in the end, they’re helping to give more money to the companies we love, and thus keeping them around.

[Thanks to SuperDickery and Golbeza for the imagery]