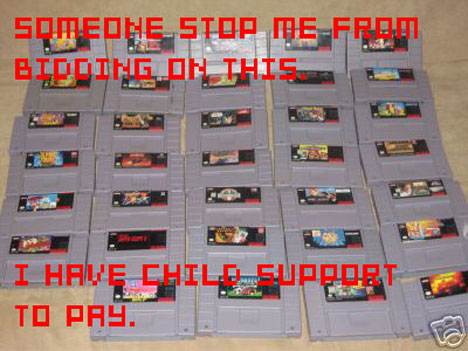 I’m one of those people who really despised the idea of digital content for games. In my heart, I’m a collector. If you head down to my basement, you’ll see racks of DVDs, several bookcases worth of books, a growing comics collection, and a smaller than I would like game collection. So naturally, the thought of not getting to visibly show off everything that I have is something that’s a big turnoff for me.

Yet it’s plain as day to see that’s where Microsoft and Sony (and to an extent, Nintendo) want things to go, I’ve realized that resistance is futile. So this week, I’m going to be doing a little soul searching, a la Descartes’ meditations, so feel free to follow me after the jump.

[No, seriously, check out Descartes’ meditations. It’s one of the original rants.]

There are a million reasons why people don’t want digital content. Many prefer to have a hard copy of their games and don’t play on an HDTV, some are afraid of putting their credit card information out on the Internet, while others don’t agree with the fact that you don’t actually “own” the content anymore. Nintendo, Sony, and Microsoft now have the objective of trying to swoon those who don’t want to buy retro stuff digitally.

Right now, I’m mindlessly trolling eBay for games that I don’t own from systems past, so that I can have it as part of a collection. I’m not gathering a seller’s collection, mind you — I’m going for a “look how many games I’ve played” collection. I wouldn’t say that I’m never going to switch over to buying games on the Virtual Console or XBLA, it’s just that I really need to have a good reason to switch.

My first consideration is the good side of downloadable content. Long ago, I lost about 90% of my cartridges that I had as a child, and so downloading stuff on Virtual Console, Xbox Live Marketplace, or Playstation Store gives me the opportunity to reclaim all those games that I lost or never got the opportunity to play.

The thing is, prices need to be reasonable. I really can’t afford to be shelling out $5 for a game that I could get on eBay as part of a 10 item lot for $15. While going with a blanket pricing scheme can be good for those games that are really good or really rare, I think the games that warrant higher prices are few and far between compared to the mountains of bad games out there. The fact that the prices for Syphon Filter, Pinball, and Pac-Man are all the same is problematic. What can be done?

I think that companies really need to monitor feedback and buzz when they announce titles for pricing. For example, if Nintendo released the SNES version of Wheel of Fortune, everyone would be up in arms about it, since no one really wants to play it, much less for $8. So, instead of releasing it at an unreasonable price, they put it at $2-$3. Games that don’t have a ton going for them out of the gate should be priced reasonably. This is probably the biggest thing holding quite a few people from downloading games released. I think taking this gamble on what will and won’t be downloaded will allow companies to charge slightly highter prices for games that are sure-fire big hits (like, say, Earthbound).

Now, am I just going to sit on my hands and wait for these games to come out? Hell no. I want an active voice in what should be released. Otherwise, what’s the point? I can just eBay the games and break out the old console in the time it takes them to release what I want. Sony could use ThreeSpeech, Nintendo could use the Everybody Votes channel, and Microsoft could use Xbox.com or Major Nelson’s blog to ask what games should be released. They could either put up a poll of five games and release the three most popular, or just give a choice between two and have two other games that they plan to release.

This way, I’ll at least be more content to sit and wait a bit, since I can be distracted by a game I didn’t know much about, and thus, I’ve gone and bought a new game that I wasn’t planning on. Now, how do you capture my interest on these unknown games? Well, let me just spit on Nintendo for a minute: make sure there are demos available for the games, along with screenshots that aren’t so tiny that I can’t tell what’s going on in the image. Really, this is something that I could do on the PS3 or the 360, but for some reason, Nintendo can’t muster the energy to do this.

Really, if I see these sorts of changes made, then I’ll probably give up my eBay hunt for games that I remember fondly, and just go and buy them digitally.